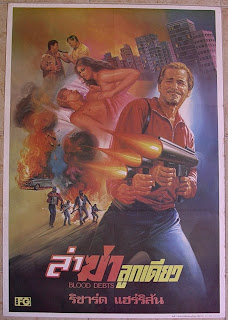 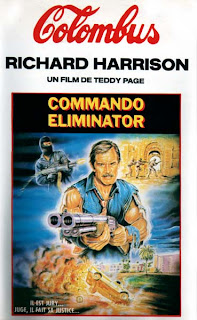 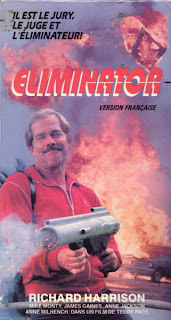 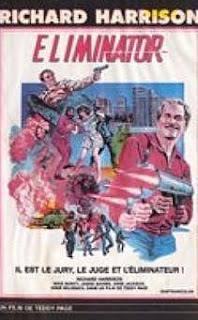 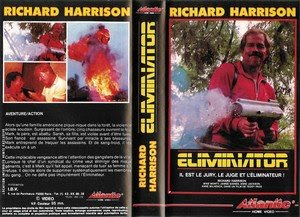 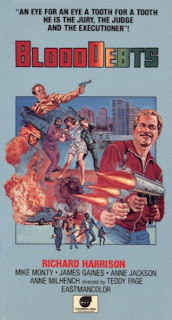 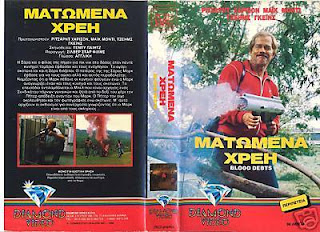 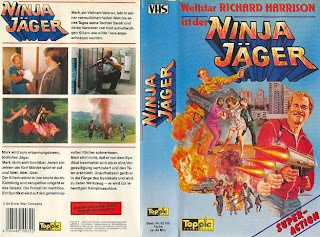 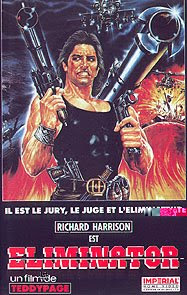 My German tape of this Filipino action flick is called NINJA JÄGER (which means “Ninja Hunter”). And while the German dubbing does its best to turn BLOOD DEBTS into a Ninja movie it can’t really hide the fact that there are no Ninjas! Instead Richard Harrison’s character refers to the criminal riffraff he’s dealing with as Ninjas. As one gangster boss puts it perfectly into words: “He sees himself as an angel of vengeance. He hates the Ninjas. He has the fixed idea that all Ninjas have to go!” Now, if you replace the word “Ninja” by “criminal” than it’s much more fitting. So, fellow Ninja film fans, BLOOD DEBTS is no Ninja movie. That said I must admit that it’s still well worth tracking down, provided that you like your action cheap, rough, politically incorrect, and trashy. It begins, promisingly enough, with a scene where Mark Collins’ daughter Sarah is raped (not shown, only indicated) and killed, and the furious father looses consciousness after a grazing shot at his left temple. Few months later, as a title card announces, Mark makes it his objective to punish the killers. 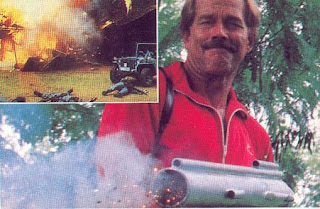 So much for plot and character development. Yes, indeed, Mark is extremely one-dimensional, but he comes around as quite sympathetic too… and boy is he one tough bastard. Without batting an eyelid he clears the streets of the criminals, until one day his wife (Ann Jackson, who has one nude scene by the way, making love to Mark) is kidnapped and Mark is forced to keep doing what he did so well in the first few minutes. You see, Mark was at a point where he wanted to stop the killing, but since he loves his wife he has no other choice but to do The Exterminator again. The mean wirepuller in the background (Mike Monty) plans to use Mark to eliminate all his ‘competition’ so he is the only one selling drugs and offering prostitution. Mark is not alone doing the dirty job, as blonde babe Liza (Ann Milhench) joins him in his mission. But it should go without saying that Mike Monty has underestimated Richard Harrison and after one (deadly) mistake too many Mark has selected a final target to eliminate from this world. This leads to a cool, explosive showdown including shootouts, bazooka-action and the always popular exploding man trick. It’s only a shame that he doesn’t use this cool weapon so prominently featured on the cover artwork. In contrast to all those Joseph Lai/Godfrey Ho/Tomas Tang “movies” BLOOD DEBTS is a real film, with the snag that there are no Ninjas anywhere to be seen. It doesn’t matter that Mark keeps on calling them Ninjas… they are just ordinary criminals. It is not what I would call a spectacular flick, but it’s a straight-forward, violent and solid B-movie with a catchy main music theme and a few nice one-liners.

No doubt about it, BLOOD DEBTS is a typical product of the 1980s and it was made around a time when Dirty Harry, the Exterminator, Charles Bronson and the Angel of Vengeance Ms. 45 were taking the law into their own hands and doing away with the criminal lowlives. Yes, vigilante justice is the dish of the day, and Mark Collins is rather good at it, muttering lines like “I’ve been waiting for you, you wannabe-Ninja” before ending his opponent’s life by putting a bullet into his body. The body count is very high, the pacing is okay, and the fights are tough (though not very gory), culminating in some nasty moments like cigar torture or the scene where the barrel of a gun is forced into one anxious guy’s mouth. BLOOD DEBTS is far from being a classic of the genre, and it’s neither exciting nor emotional, but it’s undemanding fun to sit back and enjoy. If you are a fan of Richard Harrison BLOOD DEBTS should be essential viewing. If you like straight B-flicks without frills BLOOD DEBTS comes highly recommended. But if you want Filipino Ninjas watch NINJA’S FORCE (1985), NINJA WARRIORS (1985), or DOUBLE EDGE (1986) instead.