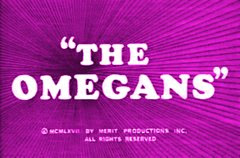 This particularly low budget Willy Wilder Filipino feature casts Hammer horror star-to-be Ingrid Pitt as an unfaithful wife to Lucien Pan, who has to be the ugliest actor imaginable (so who could blame Ingrid for wanting to conspire against him with handsome co-star Keith Larssen)? At the core of this wildly bizarre quasi-sci-fi melodrama is the old-standard plot involving the cuckolded husband who discovers his unfaithful wife and her lover (his friend) are out to do him in -- and who eventually turns the tables on them. It's a very queer, campy film with a broadly hip score -- music which reinforces the kookiness of it all. Most theatergoers will be appalled by the film, but those able to keep tongue-in-cheek and are fans of the independent oddballs of the cinema may embrace "The Omegans" (though chuckling will be heard, no doubt). The Omegans themselves are a bit of a red herring, the real "demon" here being the tainted water that Pitt and Larssen are fooled to drink and bathe in (which ultimately poisons them). It should be noted that for actress Ingrid Pitt this film curiously forshadows her participation in Hammer's "Countess Dracula" (in which she portrays the true-life countess Elzbet Bathori who, among other atrocities, bathed in the blood of virgin girls presuming it to have the effect of restoring youth and beauty).

Here in "The Omegans" Pitt takes countless baths in the poisoned water, and age-makeup is used extensively grows more ill; in "Countess Dracula" Pitt would be taking baths and wearing age makeup again. A pattern? A stretch? Probably a weird coincidence...If the sci-fi element and exotic locations were removed from this film (along with Lucien Pan's horrid acting) one wonders whether the film's core plot element would have fared better against a more mundane background. That thought posed, it's only fair to say that the Philippine locations are easy on the eye, and while the film is clearly a misfire on practically all levels, it still entertains greatly on the due to its camp and mere obscurity. Look for some wacky scientists who seem more like dirty old men...Keith Larssen's costumes border on the "hello, sailor" type, and Lucien Pan's Filipino sidekick steals the show whenever he's around. One moment sticks out in my mind as being genuinely "good": having had her mirrors all smashed or removed, Pitt can not tell she is turning hideously ugly as the poisoned water does its trick and sits at the river's edge trying to see her visage in the moving water (to no avail). It's a clever touch (one of several), and touching at the same time (one develops pity for the character who first conspired to kill but now is the victim). One can only wish it were better, but it's fun for being as weird as it is!

Drs McAvoy + Salani’s Geiger counter most active at falls (locus of psychic activity), where they see darting albinoid figures in brush (title race, primitive Origin similar END OF ROAD for civilized man undone by own instinctual passions), entourage packing after cremating Tumba (return to consciousness on disposal of subconscious link + readying descent to new psychic level on transcending physical self); back home (previous action predisposing material [in primal jungle] forming basis for dream to follow), Valdemar receives telegram (message from dreaming superego, aka Drew Gallery in Chicago – storehouse of unconscious images) commissioning new canvas (dream fodder) + he decides to return to waterfall (poisonous spring of creativity, which he left just as getting ready to paint: indie dir’s 8-yr absence from screen, Linda affirming he "turned out best work away from the studio" tho he worries it "just dsn’t seem to come off right").

At niteclub (internal location of unconscious revelry, similar to lab), notices glowing hand print on Linda’s back (intimation of carnal interest in exalted – + apparently untouched by him – ideal) + orders double whiskey (sudden thirst à la rat/Chuck’s, continuing need to inebriate self concurrent w/ quest for deeper knowledge: 1 + same in dream), thereafter tailing her to Chuck’s hotel (desire for primal scene [child’s witnessing of in flagrante parents recognition of own independence from Family Romance]), where he buys revolver (acquiring own phallus, coincidental w/ gaining knowledge traditional equation of phallus w/ consciousness) but declines to use it (overhearing scheme [on developmental stairway] use enough, gun instrument of awareness); back at lab (un/conscious quarters where he processes new info), observes glowing rat (own luminescent animal-self, having witnessed p-scene) + has martini, also drinking at home while grilling Linda (drink also illuminating her carnality) + determining to commercialize talent (now aware of own vulgarity: "Good or bad, give people what they want, so long as they pay the price for it" also message to Linda, Chuck + self concerning wages of sin).

An extremely obscure horror/science-fiction film. A strange tribe is immune to radioactive water that causes disfigurement and life after death. An artist makes his wife and her lover pose in the water. It stars horror queen Ingrid Pitt and Keith Larsen.