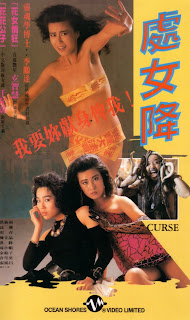 Curse is definitely one of the most outright bizarre movies I've ever seen. It seems to be a take on the Italians' cannibal genre, but the film makers decide to change the film into something more along the lines of a fantasy adventure combined with Romancing the Stone. As a result, it suffers from trying to be something that it's not. It's a low budget B-movie trying to be a blockbuster, so what results is obvious: it fails horribly and implodes on itself. It screams to be the most spectacularly original and fantastic movie to date, but it never accumulates into anything other than an odd obscurity. Along with being completely strange, it's also one of the most confusing movies ever made (though I think it would be less so if you spoke Chinese). Completely random events shatter whatever story there is (which is hard to figure out until the last half hour) without any hint of an explanation to what happens next. To top the whole bland blitz off, it's also one of the trashiest, least ethical movies ever made. The main focus here is simply pure and unadulterated (and adulterous) sex, and exploits it within an inch of its life with the "love spell" angle. If you ever have an itch to see this, get a low-budget porno instead.

Maria lives with a demanding, handicapped, and abusive husband. One day, she finally decides to run off with her secret lover, Roberto, the gardener. Her cousin overhears the two talking, however, and kills Roberto with his car. Maria decides to perform a ritual that will make her and Robert lovers again when they reincarnate into their next lives. This is the most confusing point of the whole movie, because it then cuts to forty years later in , in Maria's new life. Thing is, they never say that (not even a hint of what's going on). Anyway, she finds Robert, but Robert doesn't remember her (and he has some steamy sex with his wife). She continues to try and lure Robert with various tactics, such as pretending to drown and having him save her. These recurring encounters causes Robert to see flashes of memories of Maria from his past life. Finally, Maria goes to a sorcerer, Rafau, to help her out (who also happens to reign over a tribe of cannibal midgets. He gives her his love spell, but when she loses her virginity, she must become his to be a prisoner and midget food. Gets what's next? More steamy sex! Maria and Robert finally do it, and Rafau immediately tries to bring Maria to him. She tries her hardest not to return to Rafau, so he makes Robert catatonic. Maria and Robert's wife turn to Robert's father-in-law, a sorcerer, for help, and the three team up to stop Rafau's evil and cannibalistic ways.

I gave an extremely vague outline of what happens in this movie, because if I went into detail, not only would it take three pages, but the reader would be confused as hell (but I digress). That's the biggest problem: all of the events happen randomly and at once. Several scenes are completely unneeded events that not only don't contribute anything to the characters or plot, but are never even referenced again. There's never any time for you to catch up and figure out what's happening. Once you think you've figured it out, another one of said random scenes pops up and confuses you even further. I found myself rewinding through half the movie to find out what was going on, making an 85 minute movie take two hours to watch (which is unbearable, as one run through is bad enough).

Eventually, I just gave up and decided to live with not understanding. The only thing that made me continue watching this travesty was the graphic, unnecessary, and fortunately sleazy sex that appears throughout (it rivals Massacre in Dinosaur Valley for total amount of body fluids exchanged). The movie's existence is essentially for this explicit sex, so those expecting a cannibal movie should stay back. Yes, the mere thought of midget cannibals is amusing, but they make no more than seven minutes of screen time, and are only meant to create trashy woman-sacrificing scenes to Rafau (ahh... smell that exploitation?). Even those scenes aren't anything to write home about.

Curse is best described as a cross between Massacre in and a half-ass Big Trouble in Little China. Trying to imagine these movies together reflects how mind bending this is. It seems written as a cannibal movie, but was rewritten a million times to make it pure sexploitation.

Anyone expecting any sort of decent action movie or a cannibal bloodbath (with the misleading title) should stay away, as it crawls at a pace that's mind bending, almost as if the main point of the movie, Rafau, his evil, and his cannibal minions, were supposed to be a side thought. It doesn't even have a B-movie charm that makes it anywhere near worthwhile. The eye candy is almost the only thing keeping your eyes open and to the screen, and once you've gratified yourself to it, even that begins to get old. It's original enough, but it falls into a incredulous run through that's simply brash and unappealing. Only if you're looking for anything completely outside the norm should you consider picking this up (I'm just a sucker for obscurity). Big Trouble in Little China it ain't.

A chick has to deal with her lecherous, abusive crippled husband who likes to roll around in his wheelchair and smack her around a bunch. (Kinda like a cross between Bruce Lee, FDR and Ike Turner.) Not only that, but the dude’s brother also likes to throw her around the room and try to slip her the Saigon Surprise too. Then her crazy brother-in-law murders the gardener who happened to be her secret lover and the only decent guy she ever knew. What’s a girl to do? Of course we all know what she’s gonna do. Get revenge by going to an old mystic woman, refusing to drink some magic soup, committing suicide, and being reincarnated as a wealthy trophy wife.

We’ve all been there before.

Problem is that reincarnation comes with a price and it’s name is CANNIBAL MIDGETS! (I have a similar clause on my car. If I miss a payment, the bank sends a race of cannibal midgets to collect.)

As much as cannibal midgets usually brighten up a movie, it’s at this point where the wheels start to fall off. By this time, there are way too many supporting characters that get in the way of the flow of the story and the movie begins to get bogged down big time. Things kinda gets back on track when two opposing sorcerers have a magic battle that involves a lot of lightning, alligators, and tons of stock footage, and the bad sorcerer gets his comeuppance when he inexplicably starts puking up worms, toads and rodents while snakes erupt from his belly button.

The final animal vomiting showdown is impressive, but ultimately it’s a classic case of too little, too late. The biggest problem with this flick is that it just didn’t make a lick of sense. Imagine watching an episode of Passions on Telemundo played backwards and upside down and that’ll give you some idea of what to expect. The flick tries to juggle too many ideas, too many characters and is wildly incoherent to boot, but it’s kinda hard to hate any movie that contains cannibal midgets, kung fu, sorcery battles and lots of Oriental girls showing off their Kung Pao Ta-Ta’s. Say what you will, but you have to hand it to this flick as it knows how to toss in the appropriate amount of senseless nudity just when things are getting slow. In the end, too many sorcerers end up spoiling the stew, but as WTF made-in-China bat shit insane horror movies go, you certainly can do a lot worse.