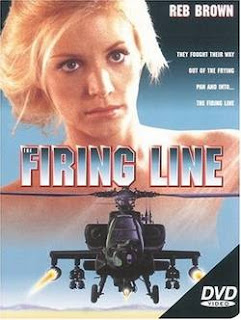 Review by Chris Parry on the E Film Critic website:

Even as bad as most Shannon Tweed movies are, few have ever scraped the bottom of the barrell with as much force as The Firing Line. The kind of early 90's action yawner that gave early 90's action yawners a foul name, this Roger Corman-like outing took Tweed and long-time action meatball Reb Brown to the Phillipines, where one can only guess it was really cheap to shoot. Rarely has so much stock footage been used in one film. Rarely has Shannon Tweed ever looked like the best actress in the cast by a country mile. Never before have I laughed so hard at an action movie. Yes folks, this is the very definition of cinematic poopy.

Reb Brown is to action films what CCH Pounder is to drama. They've both always been there, you just never usually notice them because they're thrown in somewhere in the background, occasionally rising to speak a line or two, but usually just making up the numbers. "We need a guy with a big chest who can fire a gun... Someone call Reb. Oh, and have him wax my limo when he gets here." A former pro boxer, USC football player, and serial handlebar moustache victim, Brown couldn't act his way out of an elevator. Thankfully, his career has never really required him to do so.

This time around, Reb is Mark Hardin, a US military advisor to a South American army. Or at least he starts out that way. When a rebel leader is executed without trial, Hardin turns rogue and kicks much ass. Of course, in his travels he meets a beautiful American woman with centerfold looks (tweed), who naturally enough gets sucked into the battle and has to learn how to fire a gun in heels. On occasion she skinnydips too, which is very charitable of her considering Reb's probably been seeing more naked men in the army than naked women.

Or at least he would have, if this army wasn't for some reason 65% women. I have never before seen so many South American women in green camo-colored trucker's caps than I did in this movie. It's as if the menfolk decided that a career as a homemaker would be an admirable way to spend their lives, and the women thought, hell with that, I guess I'll fire guns for a living.

What's even weirder is that a third of the men look American, another third look South American, and the rest look Asian. Ah, the troubles associated with finding a hundred Latino extras in Manila these days...

What's weirder still is that every time anything is shown that might have required some money, like a car or a helicopter or an explosion or... anything other than camo-green trucker's caps, the film switches to really bad stock footage that just screams "edit". In fact, the only thing that it seems like the producers of this film actually paid for was Tweed's wages, a few cornball explosions that look more like fireworks than artilelry fire, and the stock footage costs. Everything else seems homemade on a grand scale.

Background scenery repeats itself as if the director figured one tree looks the same as every other tree. Actors stumble over lines in the sort of way that makes you wonder if they were written down in the first place. And when Reb needs to get all dramatic for an instant, well, let's just say you laugh. You laugh a lot. You laugh at the screen with gusto.

For her part, Tweed too is awful, but at least you can see she's hating being involved with this awful excuse for a film. Take into account that, by this stage of her career, Tweed had been in Falcon Crest, Days of Our Lives, Cannibal Women in the Avocado Jungle of Death and Hot Dog: The Movie, so you just know she was used to living high on the hog. To go from giving blowjobs in the jacuzzi to having to pretend Reb Brown is the world's greatest hunk is the sort of fall from grace few would wish on anyone, but Tweed handles her indignity with all the elegance that would see her one day renowned as the go-to girl whenever you want to make a movie with lots of boobs and fake sex. Ah, Body Chemistry IV, how you've served me well.... but I digress.

The Firing Line sucks. It's no longer in DVD release, though second hand copies are floating around on Amazon if you're a Shannon Tweed fetishist (and lord knows, there has to be plenty of them out there for her to keep cranking out the skin-flicks). My advice to you would be to save your time, either way. I'm pretty darn sure nobody associated with this flick has a copy of it in their collection, so why should you?