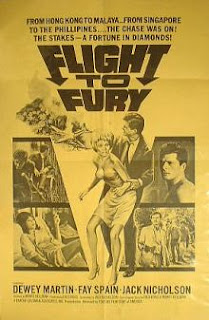 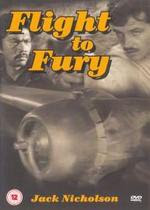 In the modern noir script of Flight To Fury, Nicholson, wrote himself the juicy role of antagonist and, in the process, crafted the most multi-layered role. The film’s main protagonist is Joe Gaines (Dewey Martin), a penniless American drifter in cadging drinks off fellow American Jay Wickham (Nicholson), self-professed bad luck Jonah and card carrying nihilist. A chance meeting with the aloof beauty Lai Ling leaves one dead body and Gaines on the next plane out of the country along with Wickham, slimy businessman Vincent Lorgrin (Vic Diaz), and Lorgrin’s blonde companion Destiny Cooper (Fay Spain).

Characters, secrets, murky motives and a subplot of missing diamonds are set up before the plane crashes wiping out several passengers and forces the survivors to make their way through the hostile environment battling the anonymous jungle, their own mistrust, and a group of bandidos led by the sleazy, lecherous Garuda, played by future Philippines president Joseph Estrada. A veteran of almost 200 Tagalog films, curiously this is his only English language film, as his small but utterly memorable role is the only one in the cast to match the greasiness of the venerable Vic Diaz.

Nicholson, of course, is the Creator of Flight To Fury’s paranoid microcosmos and, as such, gives himself the most intriguing character and the film's best lines ("Are you interested in death?"). In typical Filipino fashion, the film’s co-producer Eddie Romero, his Filipinas Productions and frequent collaborator Mike Parsons made a local version called Cordillera after the American cast left, using local actors and his own Tagalog script. In a country where 90% of their film history has not survived, this version has not surprisingly disappeared forever, but we are left with the Nicholson/Hellman version, perhaps the finest moment from their combined early careers. 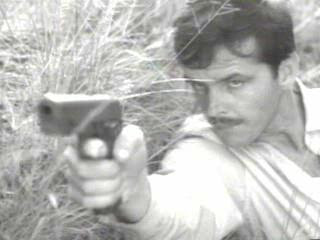 Much has been made of the pair of low-budget political Westerns director Monte Hellman and Jack Nicholson shot back-to-back in for Roger Corman in 1965, "Ride In the Whirlwind" and "The Shooting". Before that though, the pair went to the to shoot a pair of black-and-white thrillers called "Flight to Fury" and "Back Door to Hell".

As the screenplay to "Flight to Fury" was actually written by Nicholson from a story by Hellman and producer Fred Roos, you can actually see the same themes from Hellman and the same kind of performance from Nicholson that you could expect from their later films, together or apart. Hellman was only about 32 at this time while smilin' Jack was five year younger.

The actual star is Dewey Martin as Joe Gaines. We find Joe losing at a casino's card tables only after witnessing several other people either watching or participating in the exchange of some stolen diamonds. Joe is oblivious to any of this as he finds himself dead broke and quickly befriended by the very strange Jay Wickham (Nicholson).

When a local woman he picks up is murdered while he's in the shower after the pair had sex, Joe figures it's a good time to leave town. He sends a message to his pilot pal Al Ross (John Hackett) to save a seat on the next flight out. Joe sends the message through Jay who promptly invites himself along for the ride. As a matter of fact, most of the other passengers, and Al, look mighty familiar from the opening scenes of the jewelry exchange. Somehow I don't think the flight will actually arrive anyplace any of them had wanted to go.

The budget constraints are fairly obvious, and according to Hellman, filming in the in the early 1960's was no picnic, either. Even at only 80 minutes, the movie drags along in parts. Most of the cast is okay, though a gang that figures prominently in the story appear as if they just walked out of the production of "West Side Story". It's Nicholson's sardonic and often sociopathic presence that mostly propels the film. He's probably about 26 when this production was shot but he feels fully formed, even more so than in some of his later films.

"Flight to Fury" still looks more competent than the majority of the independent films I see made today, and there's several hints of the great things to come from the people involved. I guess part of the fun is watching the proceedings and realizing that Jack never ever really looked particularly young and innocent. He was crazy even then.