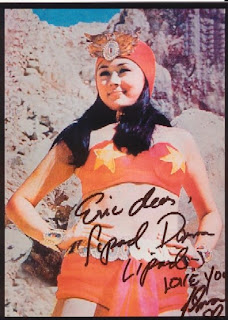 Eric: Vi, what's your favorite among your Darna movies?

Vilma: Of course, it's "Lipad, Darna, Lipad" since it was my first. It was really well done. Do you have a copy of it?

Eric C: I don't have this movie either. But if I am able to find one, I'll give you a copy. How did you prepare for this movie? Did you have any special "fight training" before you started filming? I heard that Action Star Tony Ferrer guided you.

Vilma: No, there was no training on the set before filming. It wasn't Tony Ferrer who guided me but the stuntmen called SOS Daredevils.

Eric C: Did you have any difficulties with your own stunts? 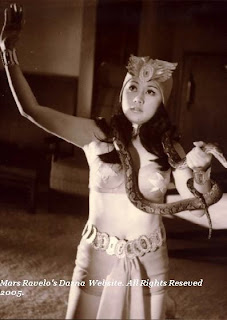 Vilma: Not really. I was a bit of a tomboy in those days so I learned things quickly. Actually, there was a time when an accident occurred. I had to go and do the tumbling bit where the stuntman was supposed to catch me. I accidentally kicked him in the face and he got a bloody nose and had to be brought to the hospital. I, on the other hand, hit my head on a rock and got a splitting headache.

Eric C: I head that you developed a fever the first time you had a scene with snakes?

Vilma: That's true! I was terrified of the snakes the first day of shooting on a rooftop of a building in Santa Mesa. I think I kept getting fevers for a week. Then, they let me touch the snakes first before every shoot so that I could get over my fear.

Eric C: how's Celia as Valentina and Gloria as Impakta?

Vilma: Celia, she's really good! And Tita Glo was so scary as Impakta, I love her so much.

Eric C: How about Liza?

Vilma: She's good too! I remember her costume that was made of sheepskin with a pair of wings. We filmed the "Babaing Lawin" episode in Antipolo.

Eric: Did you have aerial fight scenes with Liza?

Vilma: No we didn't. We fought on land..mostly in a cave. I remember my aerial fight scene with Gloria (Romero). We were standing on a stage with a dark bacground and there was a black cloth covering the half lower part of her body and there was a large electric fan in front of us.

Eric: Was there ever an origin scene where you received the magic stone with the coming of the shooting star?

Vilma: I already had the power of DARNA from the start of the movie. I only had an origin scene in "Darna Vs. the Planet Women" where the magic stone fell from the sky.

Eric C: Were you excited when the role of Darna was offered to you for the first time? Also, did you watch any of the Darna movies that came before you were offered the part? 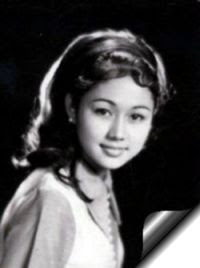 Vilma: I saw Eva Montes' "Darna at ang babaing Tuod" at the movies and Rosa Del Rosario's Darna on TV. I also watched "Darna: Ang Pagbabalik (The Return)" on TV but don't care for it… it had bad production values. Of course, I was excited when I was offered the role of Darna. I even had to ask permission from the Nuns at my school because of Darna's 2 piece costume. Besides, there's nothing obscene about the costume because this is a Superheroine after all. But I asked advice from some fans and they were concerned that I might get criticized for being daring. This is why I wore body stockings in the promotional pics for the movie. It looked so terrible and made me look fat with body stockings. William Leary and Douglas Quijano convinced me to remove the body stockings before the Press Con. I remember changing into my Darna costume and I remember their words telling me- "Vi, the stockings look terrible so why don't you surprise all of them by not wearing them. Besides, you have the looks anyway." So there I was at the Press con without the body stockings."

Eric C: What do you think of Angel as Darna?

Vilma: She's doing great on the TV series as Darna. I do watch it and she looks great as Darna. Even the fight scenes are believable. That's because when you're Darna, you cannot be lethargic. You need to look like you can really knockdown Super-Villains.

Eric: Do you mind making a guest appearance in the Darna movie or on a TV series?

Vilma: I don't mind as long as the role is good. A long time ago, in Dolphy's Darna, I was offered the role of Darna turning over the stone to Dolphy's character. But I was pregnant (my baby named Lucky).

Eric: What other memorable experiences did you have as Darna? 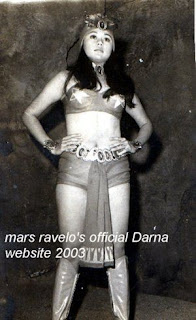 Vilma: The flying scenes. That was really hard because you have to balance your body on 3 steel bars while a large electric fan in front of my face which gave me headaches after takes. I also remember the flying scene where Darna was flying towards Manila and the background music was the song - "My Beautiful Balloon". I remember the boy Angelito who played "Ding" in "Lipad, Darna, Lipad".

Eric: Were you able to take some Darna memorabilia?

Vilma: None. We returned everything to the studios.

Eric: What's the difference between the your Darna and the version today?

Vilma: Technology is much more advanced today. The harder scenes are easier to make now. Whenever I shot my scenes as Narda changing to Darna, the camera remains steady as as I get dressed in costume and return to the same spot before the transformation.

Eric C: Vilma, You have done every role already except playing "Impakta" or an "Asuwang". Would you consider playing a Darna villainess like what Gloria Romero did?

Vilma: Yikes! Do I already look like a Vampire? (Laughs out loud) Actually I starred in a Vampire movie already "Anak ng Aswang" (Vampire's Child) but I was not the Vampire. Gloria Romero played the Vampire. Actually I think that's an interesting role and I don't mind playing a Villainess as long as it's a good story.

Eric: (Jokingly) By the way Vilma, when are you surrendering the "magic stone" to me?

Vilma: (Laughs) Oh well, it's not time yet for me to give up the "magic stone" to you." 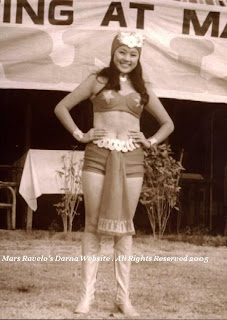 Eric: Vilma, could you do the "Darna yell" one last time?)

Vilma: We might wake up the people in this hotel. It's really late.

Eric: Please Vi. (Then Vilma gets playful with the "Darna yell")

Vilma: "Jworna!!! (makes funny expressions) Wasn't there another Actress who sounded like she was having a difficult time yelling "Darna"??

Eric C: Hehehe I almost fainted with great joy. Imagine - I got to hear the most famous Darna of them all do the yell... in person !!

All the Vilma Fans applauded as we all stayed up late into the early morning with the "DARNA OF ALL SEASONS" (who is still very pretty ..even without make-up)