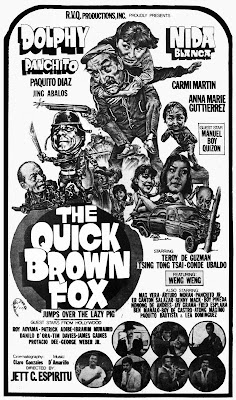 A real coup for the Search For Weng Weng documentary was meeting Dolphy, real name Rodolfo V. Quizon: the undisputed king of comedy since the 1950s, and certainly the most prolific, with over 200 film appearances to his credit. At 80 he’s hinting at retiring the crown soon, with a rash of pretenders (Vic Sotto, Vhong Navarro) waiting behind the curtains to claim the throne, yet he still tapes a hugely popular TV sitcom each week, and is planning a feature with Sotto later this year. Aside from sentimental family-centric comedy, his main forte are parodies of pop culture, both Western and Filipino, and he’s been Tarzan, the Lone Ranger, Dracula, an effeminate Darna, and in the 1966 James Batman, both James Bond AND Batman – and sometimes in the same shot!

Before talking to Dolphy I headed for the ABS-CBN Archives to view a key film in unlocking the Weng Weng mystery. Dolphy’s Angels (1980), directed by kung fu specialist Luis San Juan for Dolphy’s RVQ Productions, is a freewheeling martial arts parody featuring Dolphy as a private investigator and introducing four models who, thanks to Dolphy, would become the most glamorous Filipina actresses of the early 80s: Anna Marie Gutierrez (later the lead in Peque Gallaga’s Scorpio Nights), Carmi Martin, Yehlen Catral, and Liz Alindogan. Considering Peter Caballes was such good friends with Dolphy, it’s little wonder the first three ended up in guest roles in For Y'ur Height Only the following year; the Caballes’ also poached composer Pablo Vergara, whose idiosyncratic, proto-Bondian score for Dolphy’s Angels is almost identical to FYHO. Classic bad guy Max Alvarado (FYHO’s villain in the tartan suit) also makes a guest appearance in a bright yellow fright wig as “Bertong Maize”.

Dolphy remembers working with Weng Weng well, and it was his relationship with Peter Caballes that launched Weng Weng’s film career. Then comes the bombshell: Da Best In Da West (1984) wasn’t his only film with Weng Weng. “Oh no. We made a film together in 1980 called The Quick Brown Fox. I play a spy, and Weng is my sidekick who can crawl into small places.” Silence. “He is captured by the bad guys and ends up crucified.” And THAT was Weng Weng’s first film???? “No, he did a small part in a film for Luis San Juan.” Do you remember the title of THAT film? “No, sorry…” 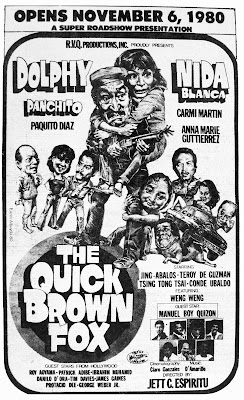 I headed straight to the ABC-CBN archives the next day and inserted the ancient pneumatic tape from RVQ Productions into the machine. And there was Weng Weng in the credits, along with Carmi Martin and Anna Marie Gutierrez. Dolphy plays a thief and secret agent, employed by Carmi Martin (who’s also, unbeknownst to him, a secret agent) to steal from classic bad guy Paquito Diaz (brother of Romy Diaz, also in Da Best In Da West). Dolphy’s partner is his on-screen wife from his long-running John And Marsha series, Nida Blanco; Weng is his tiny sidekick, looking even more baby-faced than ever, and without a screen persona as such, he’s a little awkward during his squeaky dialogue (all in Tagalog, of course, with no subtitles). Paquito’s goons corner Weng at Dolphy’s pad and he fights back like a little kung fu dynamo, grabbing one by the arm and swinging backwards to kick him in the head! Classic Agent OO moves, of course, and then…..

The picture disintegrates into a snowstorm. RVQ’s pneumatic tape shits oxide all over the machine’s heads, and no matter how many times I run the tape through the machine on fast forward, there’s sound and nothing else. A very apologetic Mary del Pilar from Archives tells me the only copy of The Quick Brown Fox in existence (!!!!) needs surgery, and if beyond resurrection, is gone forever.

I then rang Jim Gaines from a coffee shop. “Hey man, I’ve just seen another Dolphy film with Weng Weng in it.”

I laugh out loud. “Jim, we’ve been talking about Weng Weng for eight months, and you FORGOT you were in a film with him?”

He laughs too. “Jeez man, I plain forgot. Oh wow…”