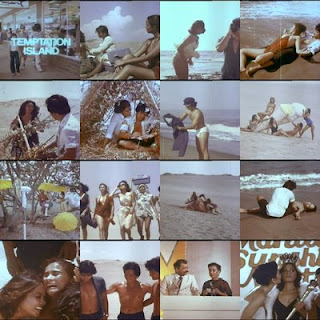 [Review by Oggs Cruz from his blogsite]

Joey Gosiengfiao's cult classic has been compared to the early works of Pedro Almodovar. I really can't comment since I haven't seen any pre-All About My Mother Almodovar. However, if the comparisons are acknowledged due to the fact that Temptation Island is a bizaarely absurdist sexual romp where genre elements merge into a hodgepodge that is surprisingly effective, then I have to agree. is pure fun. Even in its technical faults, one can derive a sense of "let-it-be" complex from the makers that turn what could've been criticism-worthy cinematic hiccups into sources of huge laughs. 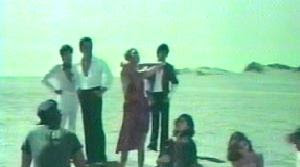 It may be argued that it's the haphazard execution of the film that turned this film into an instant classic. One cannot help but laugh as the cruise delegates flee a supposedly burning ship, when you can assuredly see that the flames are cut and pasted to the screen. A paper mache giant fried chicken turn into an opportunity for the lady survivors to pose and flirt amidst the lifeless desert. This is one hundred percent camp, where low budget studio filmmaking meets exploitation meets social commentary being masked in a comedic romp that seem and absolutely feels utterly senseless.

One can just watch everything and enjoy the fact that everything happening onscreen is utterly ridiculous. From the helicopter spreading flyers for the upcoming beauty pageant (as if Manila has hundred beauty pageant-worthy ladies per square meter), from the disdain between social climbing aspirant and the impossibly rich spoiled brat, from the teenybopper coming-of-age angle between virginal Dina and her love partner, it's all very watchable. Then Gosiengfiao decides to put homosexual politics in the map, with the character of ultra-rich pageant director whose object of admiration, his hunky laborer-turned-life partner, has become infatuated with the lady survivors. His end is tragic, a life that seems to be out of place in a culture that idolizes female beauty. Yet despite the strong commentary that feels very personal for the gay director, he still urges that the tragedy ends in absolute absurdity.

The remaining survivors considers the homosexual's death (probably suicide) as an act of generosity, and cooks the meat from the man, so that they may survive. Minutes later, they are rescued. A suicide out of loneliness and depression is converted into a selfless sacrifice, and that sacrifice is turned into a useless act of deprivation when we later learn that if they only waited a few more minutes, they wouldn't have turned into instant cannibals. Its absurdity upon absurdity upon absurdity, and everything (ugly warts and hiccups, and all) works. 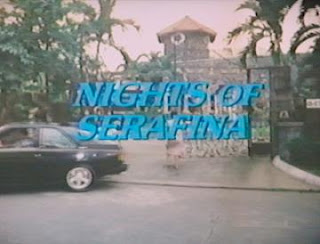 [Review from the Sinehansakanto blogsite]

Out of the five Joey Gosiengfiao films I have seen—Secrets of Pura (1989), Iskandalo! (1980), Exploitation, Nights of Serafina (1996), and Babae…Ngayon at Kailanman (1978)—Nights of Serafina is probably the closest to camp-filmmaker as Gosiengfiao got. (I have not seen Temptation Island (1981), so do not fault me for not considering that title.) Not just campy as in Secrets of Pura was, but made with camp aesthetic, with its preoccupation with the decorative and the aesthetic, and the documentation of cultural references through which these decorative elements are given importance. Instead of a focus on the story, Gosiengfiao’s preoccupation is the performance of the narrative and the narrative’s intents, the display of bodies and things rather than the exploration of the world in which bodies and things exist. It’s an ingenious rearranging, since it filters Gosiengfiao’s focus on Filipino provincialism and machismo, bypassing “storytelling” for the sake of getting to the narrative's core.

Nights of Serafina concerns Anton, a wealthy logger and his wife Serafina, a woman from the slums of . They move to Anton’s house in a tropical island where they live with Anton’s domineering and disapproving mother (a staple in Filipino movies), his rebellious brother, his brother’s horny girlfriend (who lives with them so the family can curry favors from her powerful father), a mess of maids and servants, and a group of unhappy loggers working for the family. The workers’ unhappiness, the girlfriend’s dissatisfaction, and a servant girl’s longing for a more fast-paced life are shown parallel to Serafina's, whose unhappiness with Anton is exacerbated when she finds that he is impotent due to a childhood accident where a cut tree fell on his pelvic area. She finds happiness through a strike breaker, who she fell in love with after he forcibly made love with her during a ferry crossing. After the whole clan finds out, things come to a head when Serafina and her new lover try to hide the affair from Anton’s family and the town they control.

Also, this might seem tedious and asinine, but there’s something wrong about the hair. First, continuity-wise, the men’s hairdos change from short to long unexpectedly from scene to scene. It was distracting and made their hair less of a component in a film where hair seems to be such a big symbol. Whereas Serafina’s hair is composed to be wild and seductive (there’s a direct reference to Rita Hayworth, with the way she flings it about), the mother’s was tightly wrapped in an updo and the girlfriend’s hair is free and let down but looks more contrived than Serafina’s. The way the women’s hair fell on their heads and the way their hair looked on close-ups was as important to Gosiengfiao’s framing as the face itself, and it’s a shame that for the men the same was not the case.

The constant image is that of the phallic being torn down, cut off, or useless. Anton's failing logging business lies parallel to his equally failing penis. His brother on the other hand could perform just fine, but his prowess is taxed by his efforts to adhere to tradition, constantly trying to force his promiscuous girlfriend to settle down and start a family. Apparently, the trait runs in the family: the father’s inability to perform also caused his wife to be unfaithful, thus driving the father to commit suicide. One could say that this problematic situation is formulaic and typical of femmes fatales: a woman who, unhappy with what she has, chooses to betray the people around her and cause their demise. But Gosiengfiao portrays it differently: the women are not merely dissatisfied, they are downright deprived. Serafina has nothing to be dissatisfied of. The women, who constantly strike glamour poses (as fetishistic phallic substitutes)—Serafina is introduced as a model standing atop a column—as men around them stare in awe, are collected as if to compensate for what the men lack.

Although Gosiengfiao makes use of the forests and the beaches that dot the island in which the film is based, his intent is neither to make the story more beautiful nor to make sex/love more natural. Whereas a hack filmmaker would have portrayed the jungle as a place where man and woman could be liberated from inhibitions and culture and just do whatever they damn well please, Gosiengfiao takes it a step back and portrayed the jungle and beach scenes as places where culture and morals are more at play than anywhere else. In the jungle—at a place called Forbidden Place—the sex isn’t al fresco, but takes place at a centrally located hut that makes all the sexual conflicts that happen there look like plays on domestic life. Even the very idea of “a place where forbidden things happen” suggests the very mores and laws that make certain things forbidden and not the unspecified “forbidden thing” itself. Even if this is not the case, the attention given to the prying eyes hidden amongst the foliage that watch the forbidden things as they happen—and at the beach, hidden by sunglasses and rocks—underlines less the forbidden act (which, in being performed, liberates) than the act of watching, of safely participating in things forbidden through the protection of the fourth wall.

Opposed to the jungle, the man-as-animal exists in the house and within social functions when man interacts with fellow humans. In a brilliant sequence, when Serafina arrives at Anton’s house, Anton’s mother plans a wedding party for them by bringing in a slew of animals to be killed and eaten. When Anton’s mother finally sees Serafina and rejects her, her rejection is juxtaposed with cuts of animals being slaughtered. The juxtaposition is bridged by Anton’s mother smoothly transitioning between managing the slaughter and managing her rejection of Serafina. Using close ups of the mother and the slaughter, Gosiengfiao emphasizes the barbarism and inhumanity of the mother’s actions. In another sequence, after Anton discovers Serafina’s infidelity and orders his workers to kill her lover and rape her, her rapists are shown hovering over her not as men but as hyenas ready to kill and eat a prey they have pinned. It would have been less effective if it just invoked the image of hyenas eating. Instead, the men literally looked like a gang of cannibals about to mercilessly tear into a prey.

This sounds all too academic, but Nights of Serafina is anything but. The sex isn’t merely metaphorical; it is as erotic as anything that could be shown in theatres. The centrality of the “glamour pose” is made erotic by focusing on the sleekness of the female body as seen from a lower angle, as if looking up at a towering statue. However, it is also made to be funny due to its mere existence. The women kind of just strike poses randomly, as if to constantly remind the men of what the ydo not have. Being a gay filmmaker, Gosiengfiao catches the male body at times when it is half clothed: after taking a shower or right after sex (the woman isn’t treated to the same disrobing. The women are always covered up after sex, and when their clothes are being torn off, strategically placed objects always cover the naughty bits at the expense of revealing their partner’s private areas.) When they cannot be placed in the same context, Gosienfiao makes sure that they are. During a fight scene, after Anton slaps the hell out of his brother’s girlfriend, he proceeds to wrestle with his brother wearing only speedos. It’s Gosiengfiao’s personal paradise, and a commentary on traditional Filipino machismo: man disrobed and fetishized, man deprived of his phallo-ceintric power. But the way he makes his point is so cheeky despite being so destabilizing that one cannot help but take Gosiengfiao's challenge to the very foundation of Filipino society in stride.