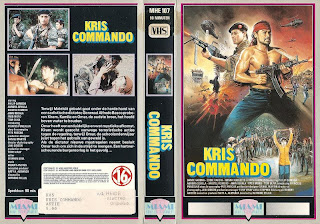 Here's a strange one: A Filipino morality tale about Muslim vs. Christian beliefs disguised as a war actioner. A group of Muslim rebels, led by the hot-headed Kiram Sali, attack Christian Philippine Army outposts every chance they get, which angers not only Army General Alfredo Basco (Eddie Garcia; THE WOMAN HUNT - 1972), but also Kiram's peace-loving teacher brother, Omar (Dante Varona), who doesn't believe killing is the answer, even if he doesn't agree with the Christian way of life. The Manila Tribune sends earnest, but wet behind the ears, female reported Mitch Vasquez (Aurora Sevilla) to the troubled region to get the real story and she ends up witnessing more than her young Christian mind can handle. General Basco sends his best man, Captain Reyes, to talk to Omar about amnesty for his brother and the rebels, but when Omar talks to Kiram about the offer, he turns it down. General Basco then personally goes to Omar's village to try and talk some sense into him and Kiram, but it turns out to be a deadly trap orchestrated by the village's evil mayor, who wants the Muslims and Christians to continue fighting for his own personal monetary gain. General Basco is slain and, of course, Kiram and the rebels are blamed, which leads to an all-out holy war between the Muslims and the Christians, resulting in the deaths of many innocent women and children. Omar gives up his peaceful ways when the Army kills Kiram and some of his own schoolchildren. Omar becomes the leader of the rebel forces and unites all the different rebel clans into one fighting force. The first thing Omar does is kill the mayor for his treachery (and we find out that Omar is actually the bastard son of General Basco!) and then he leads his fighting force on attacks against the Army. General Basco's real son, Raoul, becomes a Muslim-hating killing machine who leads his Army unit on many Muslim village raids (even members of his own unit believe Raoul is taking things too far, letting his hatred blind his humanity). The two half-brothers will eventually have to face each other in final combat. Who will be the winner? Are there any true winners when it comes to senseless war?

Those expecting a typical balls-out Filipino war actioner are going to be severely disappointed, because KRIS COMMANDO, directed by Wifredo "Willie" Milan (W - 1983; CLASH OF THE WARLORDS - 1985) and written by Pete Pascua, is more interested in theological warfare than battlefield warfare. Sure, there are plenty of gunfights and bloody deaths (including small children being murdered), but the viewer is also bombarded with plenty of Muslim and Christian ideology, some of it pretty heavy-handed, especially Mitch's plea to her soon-to-be Muslim-hating Mother-In-Law (General Basco's wife) on why she wishes Muslims and Christians can put their differences aside and live in a violence-free Philippines. Not all the symbolism is bad, though. There's an excellent sequence where General Basco is being killed in the enemy trap, intercut with scenes of Mitch, Raoul and the rest of the Basco clan celebrating Mom's birthday in . The Muslim village that General Basco dies in is populated by sick and hungry women and children, while a healthy Momma Basco and her clan feast on cake. It's a potent sequences marked with excellent editing that magnifies the differences in the two religions, but doesn't play favorites, as both sides suffer equally. Most of the bloody war action is saved for the final third of the film, where Omar goes into Rambo mode (shirtless, but with a bandana tied around his upper arm rather than his forehead) and Raoul flips out and starts killing Muslims indiscriminately. There are plenty of bloody bullet squibs and even a decapitation, but how action films view this film depends on their tolerance level for religion in the storyline. It tries to play fair with both sides, but Muslims have the slight edge here, thanks to Christian Raoul wigging-out in the finale. I guess this film also makes a good parable about War in and the difference that religion plays there, but that's purely a coincidence. Or is it? Also starring Ronnie Ricketts, Kristel Romero, John Regala, Philip Gamboa, Tom Olivia, Lucita Sorano, Fred Gamboa, Dexter Doria, Eric Robles and Princess Punzalan. Never legitimately available on home video, the print I viewed was sourced from a Dutch-subtitled VHS tape on the Miami Home Entertainment label.