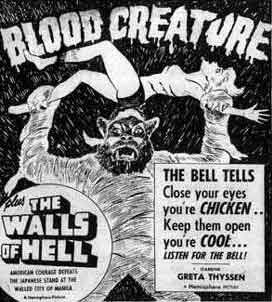 [re-released by Hemisphere Pictures in 1968 as "Blood Creature"]

Long before drive-in audiences were used to seeing the double as or South America in literally thousands of Z-grade sleazefests, there were two men in , the cineaste Gerardo de Leon and his younger protoge Eddie Romero, who had incredible success amongst audiences and critics alike making populist yet artistic movies for the local market. Not surprisingly, no-one outside the had heard of their films.

That was until an enterprising American producer Kane Lynn teamed up with Eddie and Gerry to produce a bizarre variation of . Forming a production company called Hemisphere based in the but selling its product to the rest of the world, the three men starting producing what is kindly known as “B-grade trash” for the seemingly insatiable drive-in market. Soon the cultured, critically acclaimed duo, who are enshrined in the as national film artists, were the unwitting Kings of Philippines Horror.

Hemisphere’s greatest successes were the so-called “” films: Brides Of Blood (1968), Mad Doctor Of Blood Island (1969) and its semi-sequel Beast Of Blood (1970), a trio of gore-soaked canvases dotted with palm trees and jungle-bound sleaze, all starring former AIP drive-in star John Ashley and a variety of oozing ghouls. Gerry de Leon made two solo pictures for Hemisphere, the bona fide vampire classics The Blood Drinkers (1964) and Curse Of The Vampires (1966) featuring a crazed mix of Hammer horror motifs and the Philippines’ uniquely histronic brand of Catholicism.

This deluge of horrors, ridiculous science fiction and women-in-prison features ushered in the country’s Golden Age of Exploitation. Meanwhile, both de Leon and Romero had turned their backs on the export market they had virtually created for Filipino B-films, and from 1975 onwards made smaller, more personal “art” films in the local dialect Tagalog.

But to their first film together from 1959 - de Leon directed, with Romero and Lynn as producers, Terror Is A Man, rereleased in 1968 by Hemisphere as Blood Creature. Its plot is fantastically simple and compact - an American adventurer William Fitzgerald washes up on a Pacific beach on Blood Island (and where else could it be but part of the Philippines?), and stumbles on the clandestine operations of the very European Dr Girard (Francis Lederer) and his platinum blonde hussy of a wife Frances (played by a very flat - performance-wise - Greta Thyssen). Girard, it seems, wants Fitzgerald to witness him playing God, attempting to speed up evolution by transforming a panther into a human being. His scared wife on the other hand has a combination of cabin fever and hormonal overload, and spends most of the monsoon season flapping her impossibly heavy eyelashes at Fitzgerald.

When not killing villagers off-camera, Girard’s creature is kept under wraps - literally - for most of the film, and its final appearance as a strange whiskered thing more like a shrew than a panther man, is so much more effective than it should be thanks to de Leon’s careful camera placements and use of light and shade. In short, a great B-film made by A-grade artists.

Romero later teamed up with Ashley and the king of the drive-in market, Roger Corman, to mastermind the werewolf film The Beast Of The Yellow Night (1971), prime drive-in nonsense Beyond Atlantis (1973), The Big Doll House (1971), and The Twilight People with Pam Grier as a pantherwoman, in yet another virtual remake of Blood Creature.

During its 1968 cinema rerelease, theatres installed a warning bell due to go off at the first appearance of the creature. In its absence, please set your mobile alarms for 70 minutes from now, as we witness the birth of horror, the 1959 Terror Is A Man or Blood Creature.