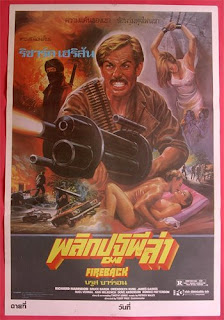 [NOTE: According to Jim Gaines, Teddy Chiu screwed up so badly on this picture that Mr Lim wouldn’t allow him to direct another picture. Jim was brought as “superviser” – or, in other words, an uncredited co-director - on Teddy’s next few pictures] 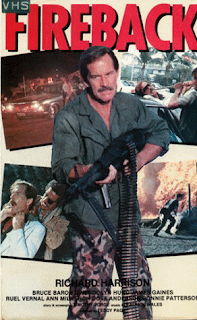 Richard Harrison, best known in B-movie fandom for such films as LA BELVA COL MITRA (BEAST WITH A GUN/MAD DOG, 1977), CHALLENGE OF THE TIGER (1980), BLOOD DEBTS (1984) and a legion of laughable Ninja patchwork flicks “directed” and produced by Godfrey Ho, Joseph Lai and Tomas Tang, stars as Jack Caplan, a tough Vietnam war veteran who finds his wife Diane (Ann Milhench) missing when he returns home. For some odd reason it seems as if every person Caplan meets tries to kill him. But neither the blonde bimbo called Eve (Gwendolyn Hung) nor the brutal ‘Man with the Golden Hand’ (Ruel Vernal) have luck and they end up dead themselves.

The villain behind the mysterious goings-on is a man with the cute name Duffy Collins (Bruce Baron, who appeared in Tsui Hark’s DON’T PLAY WITH FIRE (DANGEROUS ENCOUNTERS: 1ST KIND, 1980) and Ruggero Deodato’s THE ATLANTIS INTERCEPTORS (ATLANTIS INFERNO, 1983)) who has killed Diane because she rejected his advances. Or as he explains it: “When I can’t have her, nobody should.” Bastard. When the body-count rises to ridiculous heights the police chief (Mike Monty, no stranger to B-movies himself; look out for him in THE ATLANTIS INTERCEPTORS, BLOOD DEBTS (1984), NINJA WARRIORS (1985), JUNGLE RATS (1987) and Fulci/Mattei’s ZOMBI 3 (1988)) orders to hunt for Caplan as well. In minute seventy-five a Ninja (Tony Aaron) appears on the scene (don’t ask me why) but Caplan manages to kill him rather easily. Caplan dresses up in the cool Ninja outfit and beards the lion in his den. After he slashes Duffy with his sword in slow-motion FIREBACK ends jaw-droppingly abrupt.

Don’t worry, I haven’t spoiled the film for you, as you won’t care the least bit about what happens, believe me. Apparently, FIREBACK was scripted by Richard Harrison under a pseudonym overnight, so it’s no wonder that this cheap flick is a confusing mess from start to finish. FIREBACK is Filipino B-action without any surprises, dreary, dull, pretty dilettante and without any sense whatsoever. The performances of the cast can only be called awful and they are so listless that I started to ask myself why they even bothered to shoot this flick.

It seems as if FIREBACK was shot in 1978, but the Internet Movie Database states it wasn’t released until 1983 in the . There’s no pep in the whole eighty-four minutes and the decision to use super slow-motion during a few dramatic moments turns out to be a complete flop and is unintentionally funny. FIREBACK is cheap action nonsense that takes itself way too seriously and so it is a mildly entertaining time-waster at best. Watch BLOOD DEBTS (1984) instead! Teddy Page (also known as Teddy Chiu, Irvin Johnson and Ted Johnson) can definitely do better as he later proved with BLOOD DEBTS (1984) (yeah, that one again) and NINJA’S FORCE (1984). He is also responsible for HUNTER’S CROSSING (1983), BLACK FIRE (1985), PHANTOM SOLDIERS (1987), JUNGLE RATS (1987), BLOOD CHASE (1989), BLOOD RING (1991), plus a few others. If Filipino action trash is your cup of tea, than rent FIREBACK or buy it cheaply. You might enjoy it. Otherwise stay the hell away. I have no idea if the German tape release on the Highlight Video label is uncensored; it’s impossible to tell as the editing is generally horrible. At least there’s a reward for everyone who holds out to the end, in the form of a trailer for NINJA – DIE KAMPFMASCHINE (NINJA APOCALYPSE, 1982).

My father was very enthusiastic about taking his wife and I to the . Apparently, he had a good time on his previous trip and thought it would be fun for us. He was right, but I don't think he meant "good time" in the context that I did. I quickly learned that the women-to-men ratio in was 6-to-1 and that Filipino women are extremely friendly--especially to eighteen-year-old Westerners.

Some of the actors in the were highly unusual. I think that was kind of a haven for them and all Westerners in general - including decrepit, old losers looking to get high and take advantage of fourteen-year-old girls without receiving a jail sentence.

The two actors I got to know very well were James Gaines and Mike Monty. James and I hung out quite a bit. He spoke perfect Tagalog, but he made sure I didn't tell anyone so that he could see what they were saying about us. James was all about having a good time, which was fine with me since I had just finished high school and was essentially on vacation. However, I am not sure that the mothers of his 8-9 children were too impressed by his partying nature.

I had the experience of staying at Mike Monty's apartment complex called "Casa Blanca" which was just across the street from the Manila Midtown Hotel where my father and his wife Francesca were staying.

There was no air conditioning and was just sweltering during that time of the year. I was sleeping on the couch and Mike had to keep the bedroom door open so I could get a bit of air...not to mention a view of Mike's bed and him having sex every chance he could get. I would literally wake up every morning to the sound of him slapping a girl on the ass.

I have never seen or heard of such a prolific sex fiend as Mike in my life. I would estimate that he had sex, on average, with 2-4 different girls a day. Every day he made it a point to go to one of the parks where tons of people would hang out and pick up girls. When Mike spotted a girl--pretty much any girl in terms of looks or age, but the thinner the better--he would crack a huge smile on his face. If and when they would smile back, Mike would swoop in. I went along a couple of times with him, but it was too embarrassing for me to bear--especially when the girl was underage.

Another interesting thing about Mike was his eating habits. He often wouldn't eat for a couple of days, but when he got the chance for a freebie--usually because my father invited him to a buffet--he would eat more than is easily imaginable. The only person who could keep up with him was the actor Paul Smith, whom I personally weighed at our house in at 181 kg.

Still, while Mike had some questionable habits, he was a very nice guy. I saw him about three years ago in and, while not in the best physical shape, he had not lost his zest for women. In fact, I had to witness a miserably failed attempt of him trying to snag a little souvenir for the night.

Ronnie Patterson was an interesting fellow. Around the time of Fireback, I had the impression that the Filipino producers were trying to nurture him into becoming one of their main Western actors. I remember one long and complex action scene that ended with a close up of Ronnie firing a rifle. The cameras rolled and all the stunts, explosives, etc., went well. But when it came time for the camera to tighten on Ronnie squeezing the trigger...nothing. So the director shouted "cut," the arms specialist checked the rifle, it rang a shot with no problem, and they did take two. But on the second take, the same thing happened. The arms specialist was more than confused as the rifle worked perfectly when he tried it.

This went on for another 3-4 takes and everyone was scratching their head. Finally, Ronnie asked, "Do you want me to pull the trigger?!" After a couple of hours of trying to figure out what the hell was going on, apparently Ronnie was too stoned to realize that he should have pulled the trigger. This unfortunately sums up a lot of what was going on in these Filipino movies. In fact, you could cut my father's frustration with a knife while he made these films.

The one scene I had together with my father accidentally turned out well, at least in terms of my acting. I had a cold, and in fact had lost my voice for a few days. The scene involved me delivering a package to my father with a bomb in it. As I say, "See you later!" and walk away, he hurls the package at me and it blows up. Then he starts to question me with the usual "Who sent you?" dialogue. I had a few very short lines. However, during my close up with my father rubbing my collar and questioning me, I drew a complete blank. I think I forgot that we were doing a movie and him talking to me that way intimidated the hell out of me.

Needless to say I began to stutter, and in my mind--and probably on my face--strain for my lines. After a few seconds I finally remembered what I was supposed to say and, relieved, I said my lines. Had I remembered my lines right away I would have just blurted them out, screwing up the timing. Yet thanks to not remembering my lines and straining to say them anyway due to my laryngitis, the scene turned out well. I remember the entire crew applauding my performance while deep down I was thinking, "Little do they know..."

I also had a few other parts in the movie but I was wearing a disguise. Luckily, I was able to make some extra pocket change, as my father had cut me off financially since he didn't approve of my focus on going to bars and picking up girls. That was lucky for Mike Monty as well, as he could hit me up for the bus fare to the park in order to satisfy his sex addiction.

All in all, I think that the vast majority of the actors were there to screw around (literally) and couldn't have cared less about making a movie. Basically, I was temporarily along for the same ride as all these other guys in the Philippines at the time. But the big difference turned out to be that I was seventeen and some of them were forty-seven. Still, for the couple of months that I was there, I met some extremely memorable people and had a very interesting experience.

In terms of filmmaking though, aside from perhaps the directors, the producers, my father, Romano Kristoff, and maybe Bruce Baron, churning out a viewable product was probably the last thing on their mind.
Posted by Unknown at 7:57 PM