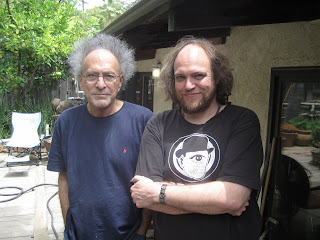 BACK DOOR TO HELL and FLIGHT TO FURY, shot back to back in The Philippines, were Hellman's next as director. BACK DOOR, a WWII story with Filipino freedom fighters, stars singer Jimmy Rogers, Jack Nicholson and John Hackett. Nicholson gets drunk, worries a lot and is shot. 20th Century Fox released the Lippert production. FLIGHT (written by Nicholson) was released by Feature Film Corp. (they also released CYBORG 2087 and DIMENSION 5). It stars Dewey Martin, Fay Spain, Nicholson (with a mustache) as a psychotic diamond smuggler (who eventually kills himself) and Vic Diaz (also in many Filipino horror movies). The settings in the jungle after a plain crash.

"Well that was after doing all the little pieces for Roger. But I got BACK DOOR TO HELL and FLIGHT TO FURY because (producer) Fred Ross saw THE TERROR in and knew that Francis and I each worked on it and didn't know who did what. He was working for a man named Robert Lippert, and Lippert cabled to him that he wanted either Francis or me to direct these two films after they couldn't find Francis, and I like to say, had he gone the other way, he might have become rich and famous.

“It was really terrific because we were off in the middle of, well we were halfway around the world, and we could kind of do what we wanted, because there was nobody there to supervise it other than Fred who was on our side. So we wrote, literally on the way to the , we were on a boat and a ship, and Jack wrote one script and John Hackett wrote the other. When we got to the Phillipines and immediately started preproduction casting and scouting locations and within a few weeks we were shooting. So nobody even saw anything including the script until we were finished with the first picture. And then by the time we finished, they kind of freaked out over some of the stuff, and they took BACK DOOR TO HELL, and added this stock footage to the end, and made it look like this gun-ho pro-war movie, which is not exactly what it was.”

BD: One last thing I want to ask you about because I know no Monte Hellman interview is complete without asking. I just saw "Back Door to Hell" recently when that was released on DVD for the first time and I was wondering if you could talk about Jack Nicholson and the collaboration you had over the years and whether you still correspond with him to this day.

MH: Jack and I are still good friends and that particular film was very interesting because, during the shooting of that film, Jack had one of those revelations that people have in their life. I think we were like a third of the way through the shooting and he said, "I think I get it. I think I know what it's about now."

BD: The film or acting in general?

MH: Acting. Something just clicked in his head and he said "I get it" and he just had a transformation as an actor during the shooting of that film. And I have to say, of all my films, that was one of my least favorite because it was very difficult. We had to shoot two films back-to-back and I became deathly ill between the two pictures. I had some rare tropical disease, which they never identified, so I was in the hospital for 3 weeks instead of being in the cutting room and that was the first picture that I didn't actually put into a rough cut myself. So what happened with the second picture is I would shoot all day then take a little nap when I came home and then go to the cutting room at nine until two in the morning and try to recut the picture to get it back into shape. I never felt that it was right because I feel that the first cut is really essential and normally under conditions like that, where somebody else does the first cut, I usually don't even look at it. I go in and I just do it all over again and there, I didn't have that opportunity. And so I kind of never really liked the movie. And seeing it on DVD, it kind of came back. And so it's like a lost child that I've welcomed back.

From MONTE HELLMAN INTERVIEW: EXPLOITATION OR EXISTENTIALISM? by Ron Wells (2000-11-07) on the Film Threat website:

Ron: How did the two films shot in the , "Back Door to Hell" and "Flight to Fury" come together?

Monte: It came out of the fact Fred Roos was in the and and he saw "The Terror" and knew that Francis Ford Coppola and I had both worked on it but didn't know who did what. He sent a cable to his boss saying there are these two young directors who worked on this movie I just saw and I thought the work was interesting and I think either one of them would be fine to do these movies. They couldn't find Coppola so they called me.

Ron: Well, you probably had a much easier time in the South Pacific than Coppola did.

Monte: I wouldn't say that. I don't think it's ever easy to film in the . There's very little you can depend on in any movie shoot, but there it's carried to the extreme. You never knew what you were going to have on any given day. On the first day of shooting on "Back Door to Hell", which we shot first, there was no film.

Ron: What kind of working relationship did you have with Jack Nicholson?

Monte: Before we went to the , Jack and I had formed a writing partnership. We had been working on a script called "Epitaph" which was kind of autobiographical from Jack's point of view. Roger had agreed to finance it. It was the story of a guy who's a young actor in . The idea was to use a lot of clips, because Jack had done dozens of TV things, and little parts in movies, and we though it would be great to have a story about a young actor and actually have clips from all of his movies interspersed. The story is about this guy who's girlfriend is pregnant and he's trying to find $300 to fund an abortion. He's got three days to raise the money. Roger had agreed to finance that. Then we went off and did the movies in the and when we got back, Roger said, "You know, I've changed my mind. I think it's just too European. No American audience is going to see a movie about abortion."