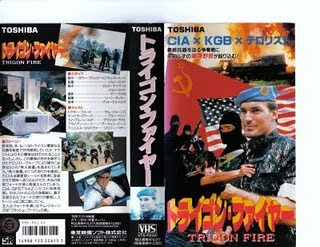 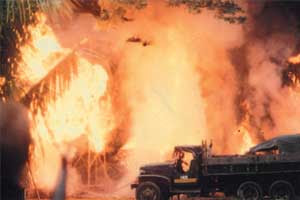 A somewhat initially neutered Sam Flash Gordon Jones, as a doctor of medicine, gets caught up in a global terror plot involving a super nuclear bomb. Known as the Trigon Factor, there are three separate parts to the mighty weapon safeguarded around the world. A plot is in action to bring the three ‘phases’, as they are referred to, together by the head of the Palestinian Revolutionary Front. Lots of guys dressed all in black with matching balaclavas, looking like a cost cutting grunge variation of Ninjas with no stealth, just brawn and a complete lack of colour coordinated fashion statement head band wear, steal away the three parts but keep them still separated. Headed up by a former defence minister named Abdul he instigates a bidding war to secure the Trigon. Libian backers come in way above the competition with an almighty $20billion. 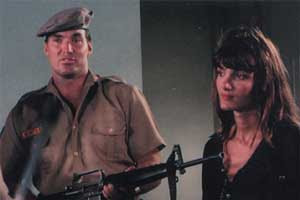 The C.I.A are on immediate alert and place a bounty of $1 million on the head of one Sirian McCoy, known as The Irish Terror, wanted around the world and known to be directly involved with the organisation behind the multiple heist. A professional terrorist bounty hunter named Shield is hired to locate McCoy and learn of the whereabouts of the three Trigon phases. Due to a last minute identity change poor old Sam Jones gets mistaken for Shield and is soon dodging bullets. His character Doctor Ford, no not Doctor Zarkov!, is assisted by a local agent operative named Manuel. Masquerading undercover as a cab driver Manuel is equipped to protect Doctor Ford, initially believing him to be Shield. With the bad guys off his scent Shield benefits from the benefits of anonymity allowing him a little extra time to get a close look at his target McCoy, and learn about the incoming Trigon parts to the area.

Sam Jones is wastefully inept for the first part of the movie as his character truly is a regular guy. It is when his wife and child are repeatedly shot down in cold blood by the militant group that he is forced to adapt to a more recognised role as an aggressor and take up arms against the killers. Assisted by Manuel in double quick time to handle a weapon, and accepting Manuel’s help, the two men turn into a combined force that actually engage the enemy in pursuit of the Trigon themselves !. Almost like a cut down version of The A-Team they are joined by a female reporter, who herself is a mysterious government agent, who can handle herself extremely well but may not be all that she appears !?. Together the intrepid trio cause havoc amongst the inept forces guarding the Trigon Factor and incredibly manage to start securing the parts! Not even ‘‘Howling Mad’’ Matt Murdock was this crazy! 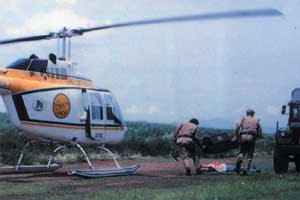 Though thankfully delivering a Flash of Action at the end, not even Sam Jones can save the world from this merciless ‘Ming’ atrocity !. Shield provides at least a semblance of what an Action hero should be, as he storms in with the cavalry just in time to at least raise viewing interest to some degree come closure.

The mind numbing banality of the movie is as wooden as Pinocchio’s carved flaccid pee shooter, and just as unlikely to stand up to a repeat showing.
Posted by Unknown at 3:07 PM