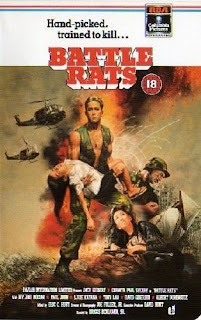 [Released in Germany as "Kampfratten"] 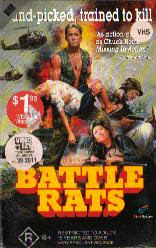 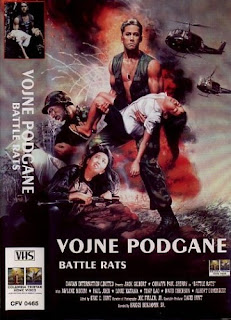 When a platoon of American soldiers are ambushed on the side of the road by a group of young Vietnamese school children (one little tot threatens the soldiers with a hand grenade!), Captain Rosenblatt (Corwyn Paul Sperry) orders his men to slaughter an entire village of Vietnamese men, women and children when they do not tell him the whereabouts of the person in charge of the ambush, who disappeared in the maze of underground tunnels located underneath the jungle. Rosenblatt trains a squad of soldiers to become "tunnel rats", a special force designed to crawl through the tunnels and kill the enemy. In charge of the squad is Sgt. Bruce Burns (Jack Gilbert) and it is his duty to lead his men into the tunnels and capture or kill Commander Von Dram (Louie Katana), who is responsible for most of the ambushes in the area. After a short period of time, where we are introduced to the members of the squad (which also includes a prerequisite bar fight just before shipping off), our tunnel rats get down to business. They enter the first tunnel, where they are attacked by snakes, dismantle some wired boobytraps, are attacked by bats and one squad member is captured and tortured by Von Dram (The soldier says to him, "Fuck you, you slimy goddamned stinking gook!", just before Von Dram pokes his eyes out with his fingers!). Sgt. Burns begins a love affair with VC girl Nama (Mylene Nocum), not knowing that she is a spy for Von Dram. The tunnel rats then raid another village and find another tunnel, which results in the death of some members due to spiked boobytraps, a snake pit and VC ambushes (the rest of the squad members get Purple Hearts, even though they weren't injured!). Sgt. Burns stupidly tells his new gook girlfriend that he and his men will be raiding another tunnel in the morning, so, you guessed it, Von Dram and his men are waiting in ambush. Captain Rosenblatt shoots Von Dram multiple times at close range (while comically repeating, "Fuck you, old man!" over and over), but Von Dram is wearing a bulletproof vest and stabs the Captain several times. Sgt. Burns and his skeleton crew must then blow up the tunnel (it's the VC's main communications base) before they are killed and Von Dram escapes. 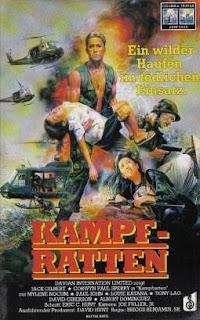 While the acting in BATTLE RATS is some of the worst and stiffest I have seen in recent memory (I was howling with laughter throughout the entire film), the violence is so over-the-top, it makes watching this almost seem like you are having a fever dream. This Philippines-lensed action film, directed by Benjamin Bridges (using his "Briggs Benjamin Sr." pseudonym), is full of so much bloody imagery, the acting can be forgiven. People (including women and children) are shot in the head, stabbed, impaled or blown apart. The eye-gouging scene is (pardon the pun) an eye-opener as are most of the tunnel scenes where the VC pop-out of their hidden trap doors in the floors, walls and ceilings and silently slice up the cast with their knives. The subplot involving Sgt. Burns falling in love with Nama is the only real negative part of the film, as the action stops dead in it's tracks while these two non-actors try to convince us they are in love. They fail miserably. The finale, which finds Sgt. Burns facing Nama and Von Dram in the tunnels is one of the most pathetic pieces of acting you will ever see. It is only saved when he happens upon Captain Rosenblatt, who is hanging by his arms with his eyes dangling out of their sockets, as he pleads over and over to Burns, "Shoot me!" (which he finally does). But hey, the bodycount is high, the deaths bloody and the action fast-paced. What more could you want? When it comes to Grade B action films, nothing comes close to the ones made in the and . Why? Because there are no rules or taboos that they aren't willing to break. 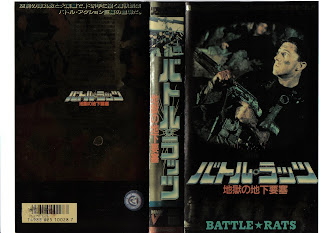 A pernicious Vietcong commander hits at the heart of the American army, using all manner of employs to kill their soldiers on duty in . Captain Rosenblatt’s division has one of the worst death rates in ‘. He wants to bring an end to the terror reign, and flush the commander out of his subterranean network of tunnels. Under the commanders leadership the Vietcong have a lethal advantage as they strike and then vanish back beneath the ground. Those that follow in after them soon become just another statistic for the army to write home to their loved ones about!

An elite force of tunnel rats is headed up by Captain Rosenblatt and they are immediately put through their suitability paces at Battle Rat boot camp. Jack Gilbert stands out as Sergeant Burns, and is soon alongside Captain Rosenblatt and fellow tunnel rats foraging for tunnel activity for real. An insidious entry point is beneath the village of innocent Vietnamese families, and they are as callously taken advantage of by the malicious Vietcong. It’s dark, dank and dangerous beneath the surface with intruder triggers lining the way, as the American soldiers discover to their detriment. Venomous snakes are coiled and poised to strike. Hairline wires are triggered to set off explosive grenades in close proximity. Underfoot traps pressure set to give way unveil a spiked demise, and lurking in the dark are the Vietcong readied to attack with their knives. 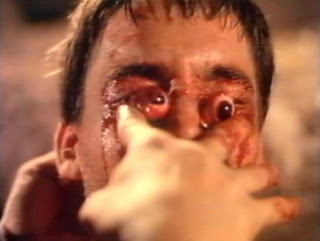 Those that fall are either killed or taken to the Vietcong commander, strung up before him and tortured. One particularly nasty scene sees the commander forcefully poke his two fingers into the eye sockets of a squealing soldier, and in a close up shot the eyes pop out with eyebrow raising disbelief. Not even spinach saves this ‘Popeye’!

Captain Rosenblatt continues to push his team back into action. Each time his soldiers strike fast and successfully on land where they are the dominant fighting unit, but each course of aggression is met doubly so when the Vietcong vanish back to their jungle holes. Despite the very heavy loses the American soldiers do learn of the commanders outside assistance, as operations aiding his brutal campaign point to fellow communist states Russia and China. These sympathisers and war mongers have a transportation trail that feeds through the intricate tunnel system. Having attained plans, and acquired information during their ill fated tours of duty into the labyrinths, Captain Rosenblatt leads his men on a do or die assault mission. Their objective is to flush out the commander and once inside, under his order, no one leaves until they blow the tunnel systems sky high! 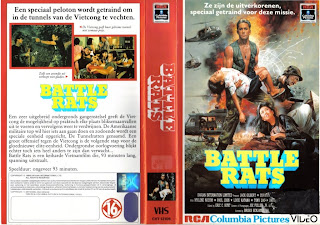 Captain Rosenblatt goes off on a one man mission to kill whilst Sergeant Burns locks and unloads with bloody abandon in order to just stay alive. It’s another explosive outcome delivering a barnstormer of a bullet ridden, blood and guts conclusion. With the commander and his multitude of loyal Vietcong subordinates well and truly flushed from their lair by the organised assault, the bowel of iniquity gets well and truly rear ended by an offensive enema directed to wipe them all out! Time then for a rebel rousing Vietcong shish kebab, with spare ribs and plenty of red sauce to satisfy even the most ardent of Action fans.