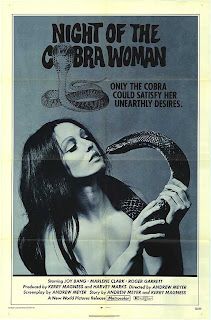 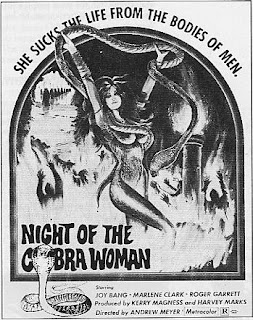 A young biology student named Joanna (Joy Bang) stumbles onto the legend of the Fire-Ring Cobra while studying snake venom in the . The Fire-Ring Cobra is supposed to carry the gift of immortality in its venom, and when Joanna finds out that a woman up in the hills may own one of these cobras, she and her boyfriend Duff (Roger Garrett) go up to check it out. The woman (Marlene Clark) steals Duff away and initiates him into the cobra cult. But when the Fire-Ring Cobra is killed they discover that the only other way to stay immortal is to, uh, make love all the time. This may sound like a good deal on the face of it, but Duff soon finds out he just can't stay up with the woman, and when she's not satisfied she begins turning into a giant cobra. Talk about performance anxiety! Meanwhile, Joanna has gotten hold of some Fire-Ring Cobra venom, run some tests and figured out what's going on, so she heads out after the woman who snatched her man. At the end, it's cute young biologist vs. hagged-out snake woman in a fight to the finish.

When you think of New World Pictures and the Philippine Islands, you generally think of the highly successful women-in-prison films New World shot there and released here, including such sweaty epics as THE BIG BIRD CAGE (the one that started the whole '70s women's-prison picture boom in 1972), THE HOT BOX (1972), and THE BIG DOLL HOUSE (1973).

But there were other films as well, like this one, an interesting but sometimes confusing blend of horror and sexual adventurism. NIGHT OF THE COBRA WOMAN was not one of New World's most successful films, and in the book THE MOVIE WORLD OF ROGER CORMAN, edited by J. Philip di Franco (Chelsea House, 1979), exploitation-film great Corman - head of New World at the time - is quoted as saying that the film wasn't a big hit because it "violated the laws of logic several times."

“In a horror or science-fiction film you can start with as outlandish a promise as you want,” Corman explained, “providing you are then logical in the treatment of that premise .... The film, although it was as well produced, directed and acted as any of the other low-budget horror films, did not do as well, and I always thought it was because of that break in the logical chain.”

Miss Bang, who owns one of the all-time great actress names, seems to have peaked career-wise in 1972, when no fewer than four films were released that featured her in substantial roles: COBRA WOMAN, CISCO PIKE with Kris Kristofferson, DEALING with Barbara Hershey, and PLAY IT AGAIN, SAM with Woody Allen.

Miss Clark was a VOGUE model who had a pretty good '72 as well, appearing with Jim Brown in the black-exploitation film SLAUGHTER and in the wacky comedy-horror picture BEWARE THE BLOB that year. Although she's also a veteran of Russ Meyer skin flicks, she may be best-known to exploitation-film fans for her role in the 1973 vampire picture GANJA AND HESS, playing Ganja to Duane Jones' Dr. Hess.

Chance are good that "Slash Marks," who played a G.I. victim of the cobra woman, is really co-producer Harvey Marks.

FROM THE PRESSBOOK: REALLY A SERPENTINE SEDUCTRESS?

"For a while I envisioned myself really turning into a serpent. All those scales are too much!” says Marlene Clark, star of NIGHT OF THE COBRA WOMAN. "Snakes may be sensuous, but I'd rather be myself.” Marlene refers, of course, to the incredibly heavy make-up she wore during the 'transformation scenes' in the film. "It literally took three hours to apply and another two to take off. Some amusing things did happen, though, " she continues. “Vic Diaz, a fantastic Filipino actor played the part of Lope, Francisca's deformed son. He wore a false eye during the entire film and really did a bang-up job. But one morning he started to sneeze and sneezed it right off! This broke everybody and everything up for another hour and a half, while the make-up man put it back on, and all day Vic teased us by threatening to sneeze again."

Filipino character actor Diaz is a familiar figure to fans of horror and exploitation films, appearing in, it seems, almost every American drive-in-style picture made in the Philippine Islands since the mid-'60s. He specializes in playing deformed and/or goofy characters - perhaps the goofiest being his gaseous vampire wannabe character in 1979's VAMPIRE HOOKERS.

From the ads: "She sucks the life from the bodies of men!" Marlene Clark (Putney Swope) stars as a woman who can turn herself into a cobra. She needs constant lovemaking (and snake venom) to stay eternally young, so she steak the boyfriend of a young biology student (Joy Bang). With Roger Garrett and Slash Marks. Advertised as being in "Slitherama". 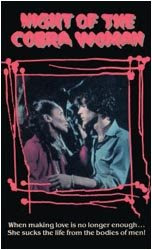 Black Horror Hall of Famer Marlene Clark is one mysterious figure. There's strangely little information on her to be found on the Internet beyond the fact that she's an ex-model who was once married to Billy Dee Williams (and who presumably to this day can't get the taste of Colt 45 out of her mouth). One thing that seems clear from her body of work, though, is that she has a fondness for: A) the and B) snakes. Amidst some success as a blaxploitation actress in films like Slaughter and Ganja and Hess, as well as integrated work in The Beast Must Die, Switchblade Sisters, and even a recurring role on "Sanford and Son", she starred as the magical baddie in a pair of serpent-themed Philippine horror movies: Black Mamba and Night of the Cobra Woman.

Both are slow-paced English-language films focusing on rural mythology, and both insist that is evil, evil, EVIL. I don't know what it was about her that screamed "Satan spawn" to Filipinos -- perhaps her dark skin was exotic enough to be frightening -- but her naturally pleasant looks and kindly, classy demeanor don't translate to such on screen in either film. Thus, for the sake of Night of the Cobra Woman's watchability, it's a good thing she gets nekkid. In the movie, her big honking mammaries seduce man after man in order to replenish her youth and keep her from turning into a snake. It's never explained why sex works better than, say, Oil of Olay, but then again, little is adequately explained in this film. Like, why would Duff (Roger Garrett) go into the woods alone searching for this rumored "snake lady" when it's his girlfriend, Joanna (Joy Bang), who's the anti-venom researcher? We come to find out that the emotional state of a snake influences the effect of its venom, meaning that angry snakes kill and happy snakes heal. I guess horny snakes make you wanna bone everything in sight, because that's what cobra woman Lena () does. Duff becomes one of her conquests but soon realizes that once you go black, you really can't go back. Post-coitus, he finds himself aging rapidly; explains that she had to (ahem) "suck the years" out of him in order to keep herself young and human. Now, he must rely on her to give him the venom needed to keep him young. In return, he keeps her supply of hormonal men coming...so to speak. It's inevitable that must have a transformation scene, though, and when it occurs, it spurs unintentional laughs -- unless you're a big fan of papier-mache. Throw in popular voodoo deity Damballa, hot eagle-on-snake action, and a hunchback for good measure, and you'll find Night of the Cobra Woman a bit more outlandish than Black Mamba and a bit more entertaining only in that it shows more (that is, any) skin -- although really, you'll be hard-pressed to make it through either in one sitting. Hissssss....

WOW--another disciple request...and wow...we definitely weren't expecting this caliber of trashy fun from a lensed snake movie. It has it all--a doe-eyed college student played by Joy Bang (not kidding), Sexy Snake Queen seduction, seedy rituals, Sexy Snake Queen double-double cross, horrible transformations, cock fighting and a masturbation scene that is truly odd. Despite all that we have just told you, this film moves along at a fantastic and super watch-able pace. A refreshingly well made, hard R film--the Dirk Benedict snake potboiler SSSSSSS did a terrible job ripping off this awesome, dynamite film... And don't forget the cardinal rule "De-fanging a snake is like castrating a MAN!!"--amen to that...