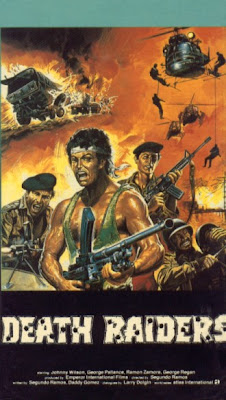 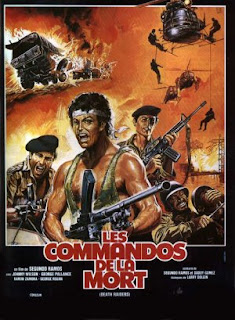 Emperor Films’ successful sale of Deadly Commando/Suicide Force (1981) to Germany’s Atlas International prompted them to approach Atlas two years later, in true Filipino form, with essentially a carbon copy of their previous hit, dragging along much of its cast and crew. Once again, Army Commander Johnny Wilson sends a squad of black-clad commandos to rescue kidnapped person-of-interest from a rebel commander played by Rodolfo “Boy” Garcia; this time he is self-styled People’s Revolution leader Karamat, suffering from delusions of his own divinity, who snatches the province’s Governor and his daughter and drags them back to his mountain lair. Wilson charges Captain Barone (60s cowboy star Jun Aristorenas) to reactivate his Death Raiders, a boozing and brawling bunch consisting of three of the Pinoy Bruce Lees – Ramon Zamora, Ulysses Tzan and Robert Lee – plus the Man Mountain from Mindanao, Mohamad Faizal. From a cast well-versed in comic action films, you’d expect some broad comedy moments – Ulysses Tzan recreating his Drunken Master routine from Mantis Boxer (1979) during a street fight, for instance, and the Raiders’ room-trawling during their rescue of Tzan’s girlfriend from a busy brothel. It’s also a much less one-dimensional film than Deadly Commando, with more welcoming serves of sleaze and blood, more fleshed-out characters, and imaginatively shot bang-bang scenes. George Estregan is also back as Karamat’s reluctant second in command working to bring down the lunatic cult leader down, alongside Karamat’s son Donald, played by teenage pin-up Joel Alano, who would pass away from a heart attack in 1986 aged only 21. Not bad. 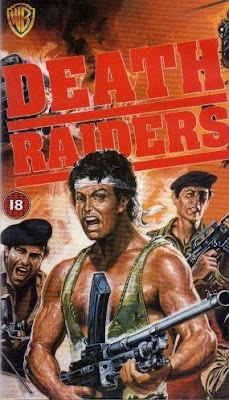 This Filipino picture from 1984, directed by Segundo Ramos (who also did Suicide Force which stars the same lead), begins when an evil military big-wig kidnaps a local politician and his pair of daughters, after which he marches them through the jungle and basically holds them hostage at his secret hideout/fortress. The government wants to get their man back but are worried that sending in the army will find them dead so they bring up a team of special forces types dubbed The Death Raiders and lead by Captain Barone to sneak in and get the hostages out. Unfortunately for the military big-wig kidnapper, his own son disagrees with his politics and stars to make life difficult for him just as Barone and his crew show up and shoot their way through a seemingly endless supply of enemy soldiers.

Fast paced and plenty violent, this is an enjoyable enough picture in its own right as long as you’re able to look past the cheap production values and just enjoy the chaos. The last half hour of the film is chock full of shoots outs, burning buildings, explosions and carnage but even before that there’s a weird energy to the film, from its bizarre rape scenes to its uber-macho dialogue, made all the more screwy by some ham-fisted acting and macho chest beating. 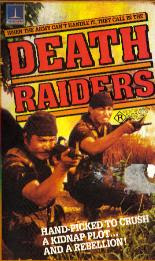 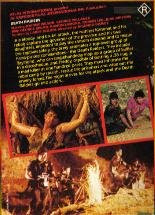 A provincial Governor and his two daughters are kidnapped by the evil Karamat and his trigger-happy men. After a treacherous trek through the jungle, Karamat and his prisoners finally arrive at his fortress, which is heavily fortified with men with guns and a series of maze-like caves. The government deems an air attack or a full-on ground assault too dangerous, so they reform the Death Raiders, a small group of Black Ops. soldiers headed by Captain Barone, to penetrate Karamat's fortress and rescue the Governor and his daughters. So begins this enjoyable (sometimes for the wrong reasons) action film from the Philippines, as Captain Barone rounds-up all the ex-members of his squad; from a disco (with the prerequisite bar fight), a police hostage situation (with the prerequisite attempted rape scene) and helping an alcoholic member free his girlfriend from a mafia whorehouse. Meanwhile, Karamat's son, who disagrees with his father's political views, unsuccessfully tries to lead the prisoners to freedom. When Karamat catches him, he ties him up in the middle of town and beats the stuffing oput of him with his bare hands in front of all the citizens. This does not sit too well with Karamat's wife, who secretly plans a revolution with a sympathetic rebel in town. After Captain Barone and his men train to get into shape, they set out on their mission to Karamat's stronghold. They make it to the cave where the Governor and his daughters are being held and they get an unexpected hand from Karamat's wife and son. From then on, the group try to make it through the jungle to safety, before the Army does a full air and ground attack on the compound. Members will be lost on the way as Captain Barone and his men must fight an inexhaustable supply of Karamat's soldiers, even as some of Barone's men return to Karamat's compound to rescue innocent women and children. 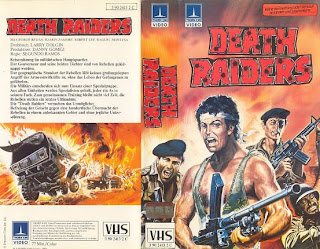 Directed and co-written with a lot of intentional humor (check out the disco and whorehouse scenes) by Segundo Ramos (SUICIDE FORCE - 1982), this film has a lot going for it (especially the early martial arts fights, including an inventive, almost comic book-like, use of a spinning bar stool), but stops dead in it's tracks every time it goes back to the Karamat father-son conflict. This film works best when it concentrates on the Death Raiders themselves and their comradarie, which seems natural and unforced (it's apparent these actors, including Johnny Wilson [DEVIL'S THREE - 1979] and George Estregan [CLASSIFIED OPERATION - 1985], here using the name "George Regan", have worked together many times before this film). As with most Filippino action films, this one contains more than a few scenes of attempted rape (but, surprisingly, no nudity), including a comical scene where a bunch of Karamat's soldiers fight each other in the middle of a lake as they try to rape one of the Governor's daughters. While most of the action in the latter-half of the film is basically gunfights and explosions, the film has a kinetic energy that's infectious and fun to watch. I was taken aback by the abrupt ending, but that's a small complaint to an otherwise highly watchable film and, at 80 minutes, it doesn't overstay its welcome.
-->