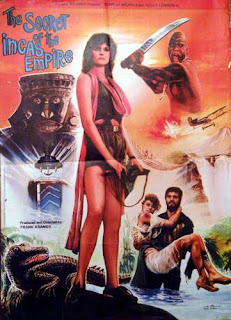 At long last it can be revealed! The startling secret of the Incas’ empire has been hidden from the eyes of the white man for a millennia! Now, thanks to the unceasing efforts of Professor Bradbury and his sidekick, Linda Logan, the entire world will know what has been concealed beneath the volcano deep in Incan country, wherever the hell that is! Is it an untold wealth of fabulous jewels? Tons of shiny, kick ass gold knick knacks? A fountain of youth that gives all who taste from its refreshing pool eternal life? Any of those would be pretty snazzy to be sure! If the secret of the Incas’ empire sucked!

Which it doesn’t! Because why would you go to all the effort to keep something sucky like a lost ark or some other overhyped doodad secret? The Incas knew exactly what they were doing when they made sure that only those with the smarts and courage to survive the plastic alligators and avalanche of foam boulders would uncover their most prized treasure! And that treasure would be an organ!

But not just any organ! An organ like you might have been able to buy at a mall in the late 1970s! And it came with a freaking bench! Yeah, the Holy Grail is pretty awesome, but it’s not like you have any place to sit down while you’re admiring it! If you got tired of standing after finding it, you’d probably have to sit on the floor of some dusty cave! Once again, the Incans prove to be far more advanced than we ever imagined!

But what would be awesome about a holy organ if there was no one to play it? The Incas thought of this, too! That’s why there’s a guy dressed up in a ratty bird costume who tickles the ivories at dramatic moments throughout the film! I know, I know, so far the Incas’ Secret Stash I’ve described only sounds like half of The Captain And Tennille and without even the sea captain’s cap! The Incas thought of that also though! That’s why Birdman can shoot lasers out of his eyes! It’s like if Elton John was an X-Men!

Like all great adventures that end up in an underground temple where the Incan Billy Joel is holding court, getting there isn’t easy. In fact, it’s downright painful! Especially for the viewer! The first hour of the movie alone is enough to ward off all but the hardiest souls, even those trained up on toxic Italian Indiana Jones clones like The Mines Of Kilimanjaro and Mark Of The Scorpion! The distinct lack of entertaining action combined with a story that was just as mysterious as the Incas’ big secret will no doubt leave many nonbelievers on the side of the road fast asleep!

If you battle the odds, grit your teeth, and fight back the urge to kill yourself though, you’ll find that we’ve got your basic treasure map being pursued by bad guys situation. The bad guys chase the good guys around the jungle which must be a pretty small jungle since the good guys are always escaping and the bad guys never have any trouble locating them again. Attacks by fake gators, an encounter with a truck full of whores, and a run in with the guardian of the temple who worships an idol with a boner highlight things.

The movie makes a valiant effort in the last thirty minutes to deliver on its lost temple promise by having our heroes battling Birdman while everything is exploding around them. The girl gets herself tied up under a giant press-like thing that threatens to crush her and it’s only after Birdman somehow falls down some stairs into the underground lake that Professor Bradbury can set about rescuing her. The movie does show an admirable amount of self-awareness when the girl complains about how long it’s taking him to save her and he reminds her that he isn’t Indiana Jones! Really? No wonder you looked more like Conrad Nichols from Days Of Hell and Thor The Conqueror than Harrison Ford!

Director Gianfranco Parolini (Samson, Sabata, Five For Hell) returns to direct his final feature after taking ten years off and proves that those ten years when he wasn’t making movies were good not just for him, but for the rest of us as well! An ugly, poorly shot affair that never explained much and relied on the girl falling into various places to move the story along (and forced her and her boyfriend to unconvincingly roll down tunnels to simulate something approaching action), The Secret Of The Incas’ Empire does sport those “special” moments you’re no doubt searching for like so much lost Incan piano-related treasure.

There’s the time Professor Bradbury explains that he’s able to throw things with a great deal of accuracy because he used to be a relief pitcher for the Dodgers. And who would even try to forget the stunningly hilarious final moments of the film that gives us slow motion for no reason, but then manages to make us forget how dumb that was by having the end of the movie turn into a really bad painting! There’s even a couple of panty shots for you dirty birds out there, too! A sword fight between the muscled-up temple guardian and the good guy where our hero also manages to use an umbrella should give you an idea of what to expect out of this one. Once you see it, there’s no way you’ll want to keep this secret!