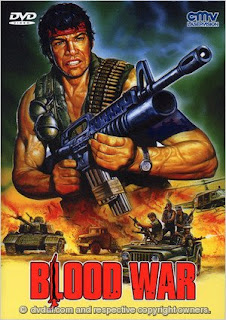 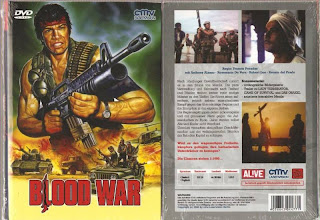 Here's a little-known (and rarely-seen) Filipino "Muslim rebels vs. Christian military" action film with a strong religious (mainly pro-Muslim) storyline and a huge cast of Filipino talent (The opening credits lists over thirty actors, many who should be recognized by fans of this genre). The film opens with a battle between rebel factions and the military, where rebel leader Hadji is captured and sent to prison. A kind Colonel allows Hadji to see his family, including young son Basaron (Mabuhay Shiragi), one last time before he spends the rest of his life behind bars, where he tells Basaron to always obey the law, put his trust in God and not end up like him. The Colonel then promises Hadji to keep a close eye on his family and we then watch Basaron grow up in front of our eyes (thanks to the magic of camera dissolves) as he prays in a mosque. The adult Basaron (Anthony Alonzo; W - 1983; CLASH OF THE WARLORDS - 1985) is now a college student studying to be a lawyer and is dating the beautiful Narsheva (Rosemarie De Vera), when he learns that his father was just pardoned from prison. The townspeople hail Hadji as a local hero, but Basaron, who hasn't seen his father since that day in prison when he was a little boy, is a little reticent of his father's hero status since he has grown up following the straight and narrow. Complicating matters is the dastardly Bashir (Renato Del Prado), who has the hots for Narsheva, so he rapes her to stop her from marrying Basaron. Narsheva must marry Bashir to save face (Apparently, Muslim religion is very strict when it comes to women losing their virginity), but she really loves Basaron, who returns back to college after putting a beat-down on Bashir when he catches him slapping Narsheva around. Another civil war breaks out in Basaron's village and martial law is put into effect by the military. When Basaron returns home, he is made offers by both sides of the struggle. The rebels want him and his father to join the cause (his father flatly refuses because he is now too old) and the friendly Colonel (who is now a General) wants him to join the Air Force. Basaron, who would rather be left out of this mess and finish up his studies to become a lawyer, decides to become a member of the Air Force, with his father's blessing. Basaron's life in the military is not an easy one because the majority of military recruits are Christians and his loyalty is constantly put into question. Basaron quickly puts those questions to rest when he heroically saves his squadron from a rebel attack. He does his job so well, in fact, that the rebels order his assassination and several unsuccessful attempts are made on his life. A cease fire is eventually agreed to between both sides, but a militant faction of the rebels stir up the shit and play both sides off each other, which forces a violent showdown between the rebels and the military (children are killed in front of Basaron's eyes). Can Basaron put an end to the madness and head back home, where he can question his father about the meaning of peace? What do you think? 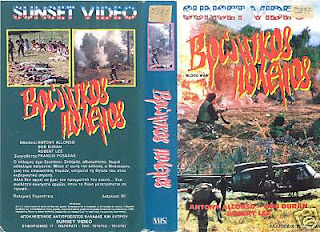 This is a slow-moving and less-than-satisfying action flick, directed by Francis 'Jun' (WILD CATS ATTACK - 1981; WILD FORCE - 1986) and scripted by Conrad Galang. While the film does have its share of action set-pieces, they lack the insane spontaneity we come to expect from Filipino actioners (even the English dubbing lacks the humorous dialogue we depend on to get us through the slow spots). BLOOD WAR seems more concerned with Basaron's internal moral struggle than conflict on the battlefield and while I'm sure this plays well in it's home country, it loses a lot in the translation when played abroad. It's just as preachy as KRIS COMMANDO (1987) when it comes to Muslim vs. Christianity beliefs, but lacks the bloody violence we get to see in KRIS. While BLOOD WAR has lots of gunfights, most of the bullet squibs are confined to the ground and other inanimate objects. Here, when people get shot, they grab their chest or heads and we never get to see any carnage whatsoever. Major plot points are also dropped or forgotten (What happened to Narsheva and Bashir? We never find out.) and the film meanders along at a snail's pace, lumping one internal conflict onto another without a satisfactory conclusion to any of them. While the film ends on an uplifting and Muslim-loving note, it's just too damned earnest and well-meaning for it's own good. This is strictly lower-tier Filipino action that can be skipped by all those except diehard fans that must see every available Philippines-made action flick (A category I'm afraid I fall too easily into!). Also starring Joonee Gamboa, Ernie Ortega, Robert Lee, Fred Moro, Tony Martinez, Bob Duran, Rex Lapid, Dahlia Delgado, Grego Gavino, Naty Santiago, Vic Santos and Dave Moreno. Available on DVD from German company CMV Laservision in a fairly beat-up fullscreen print in both English and German dubbed versions.