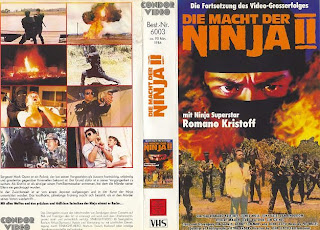 DOUBLE EDGE is not a sequel to NINJA’S FORCE (1985) (as the German title wants to make us believe), made the previous year, although there sure are some similarities. For example, it also stars Romano Kristoff, who is hard-boiled cop Mark Quinn this time. In the pre-credit sequence we see his parents being killed in a hail of bullets by merciless money collectors, and twenty years later the cruel killers are still not found. This could be the beginning of a slow-moving, emotional drama… but luckily director John Lloyd decided otherwise. The streets are flooded with brutal criminals, and we are introduced to a gang of assholes taking coke before they attack a gas station killing what comes in their way. A girl is raped (not seen though) before shot to death, her murderer dryly commenting “Unfortunately I can’t stand cry babies”. But then Mark Quinn arrives on the scene, too late of course… but better too late than never. He gives his best Dirty Harry impersonation, saying “You have the right to remain silent…” while shooting some criminals before blowing up the whole gas station with the gang leader still in it. KA-WOOM!!! Problem solved. Before you have time to catch your breath a few idiots attack a food store when suddenly a Ninja appears and slashes the criminals with his sword. A policeman says: “He was wearing the same costume as Lee van Cleef in that TV series!” The police inspector is annoyed ‘bout this, but not Mark Quinn as he is – who would have guessed it? – the Ninja. Now the movie reveals this ‘secret’ after sixty-five minutes or so, but his double identity is so damn evident right from the start that it certainly wasn’t a spoiler when I’ve stated the obvious. In his Ninja outfit Quinn walks the earth killing criminals while helping their poor victims, giving them money and comfort, which makes him some kind of strange mixture between the Exterminator and Robin Hood. Later Quinn is caught by the killers of his parents and he is made addicted to drugs, with one criminal saying “this fix is going to kill a horse” while injecting him a last dose. A horse it may kill, but it sure as hell didn’t kill Quinn. Because, you know, he was trained by Ken Watanabe (who only can be seen in two cool flashbacks), and so he survives the lethal dosis without too many problems, although the withdrawal treatment can’t be called easy. But then, finally, revenge is the dish of the day, with Mark Quinn massacring all the criminals in his Ninja outfit. The main baddie finds a pretty painful but very satisfying end, and the whole showdown delivers exactly what you come to expect from a Ninja flick. A high body-count, cool weapons (althouth the scene with the sickle to the throat seems to be cut), deadly booby-traps, lots of explosions… this is great fun. DOUBLE EDGE is far from being a good movie, but it’s entertaining, sympathetic action trash, lively directed and accompanied by a pounding synthesizer music score. Ken Watanabe is pretty much wasted as his role is sadly very short. The Ninja is able to perform some fine stunts, like making a few disappearing acts, jumping out of exploding houses or digging himself through the ground like a mole on drugs. I really enjoyed this Filipino B-movie although I would have preferred to see less Robin Hood and more the Exterminator. The German dubbing is okay, and the best line is reserved to a criminal talking to his friends when confronting the Ninja: “Leave it be, I’m gonna slash open the cowl of the freak!” A few moments later he’s dead. A fine example of famous last words, eh?
Posted by Unknown at 3:33 PM