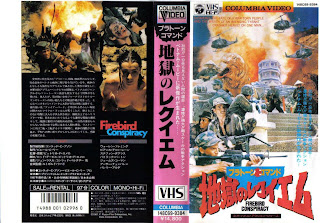 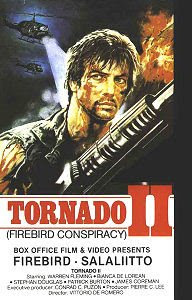 The film started out with Bruce Baron as the lead and he complained so much that the producers asked me to find a way to kill him off and introduce another lead into the film. I was the military Adviser and an actor on this film. Originally, Jun Gallardo was the director. However, Boy Puzon asked a pompous, new film school graduate, to look at what they had, and act as the producers’ rep. yep! It was Vitt Romero! Before you knew it, Jun got canned and Vitt was the next Director.

It took us eight months to finish the film. It got to the point where I didn't give a fuck anymore. Vitt had great plans - the only thing is, he never shared these plans with anyone but Bugsy Dabao who, besides being a co-writer with Art Nicdao, was also the 1st AD. One day we wrapped early, and Vitt and Bugsy failed to inform everybody that we would be doing a shoot later in the evening - The Big Scene! Complete with blasting and gunfire! Hahahahahaha… So we wrap and go back to the Sacramento Resort in Tanay. When we arrived there, Peta Whittle (lead Actress, former Aussie Playboy Bunny and a great gal) suggested that we play a game of Monopoly as, besides swimming or tennis, was after all the only thing one could do to keep one’s self amused.

While playing, we noticed that the owner of the resort had stocked up on Gilbeys Gin. So we started drinking and continued to drink into the evening. All of a sudden our vehicle pulls into the parking lot and Bugsy appears telling us we have to go back to the set to shoot! Oh boy! Mayhem ensued. We got to the set, and each and every one of us was stinking drunk! I fell off of a cliff and broke 3 ribs but continued to work. We were blocked on the side of a hill and supposedly escaping fro artillery and mortar fire.... Vitt screamed ready from another hill, and at that moment Paul Vance collapsed with his head between my feet and started to puke. I shouted back, "No! We're not ready! Paul's puking"!

Well, needless to say that the whole scene turned into a cluster fuck. People were falling down left and right. People who should have died were standing up and people who should have lived were falling down. Later we went to see the dailies and Vitt was complaining non-stop to Boy Puzon. For the most part we laughed our asses off. Vitt would look at the screen and almost in tears would tell Boy, "There's the drunks!" Boy would look at the screen but the scene would change and he would say, "They don't look drunk!" This went on all afternoon. So you get a better idea, Vitt is oh so gay and a butterball! One day when we were doing a river scene Peta and Vitt got into an argument. Vitt screamed at her, “You're nothing but a bunny!" Peta replied, "Well you're nothing but a big fat fucking walrus." Whereupon, Vitt trashed the hailer! After that he had to scream out all of the directions till he couldn't talk anymore. Oh man... what a mess...

Firebird, a microfilm containing indicting information of American forces corruption in , and a damning document to shock the Whitehouse and embarrass the President of the , is subject to conjecture as to existence and location toward the end of the Vietnam war. The Pentagon and the C.I.A want to recover the microfilm, even though the official word on the subject is that it is nothing more than a tool of propaganda.

A small detachment of American soldiers led by Captain Beck must baby sit an important Vietnamese chief diplomat, travelling with his young daughter and pet dog! The chief being the man who may or may not just so happen to be transporting the Firebird microfilm!? Along with a female reporter Captain Beck and his loyal men have their work cut out for them, particularly as their path to the border is through Vietcong jungle territory. This is where the rumble in the jungle takes no prisoners!

It is not long before Beck’s convoy is set upon and what follows in quick succession are multiple incursions resulting in severed limbs, bloodied stumps, and casualties all about as mortar attacks fire in from all around. Helicopters swerve and weave to bring assistance to no great avail and the explosive Action quota fills the screen with realistic effect.

Fleeing the encroaching Vietcong force Captain Beck leads his party through the perilous jungle, which takes victims of its own as some fall prey to the multiple death traps along the way. Swinging spikes of death flail through surprised victims with lethal accuracy, with a resultant residue synonymous with the blood letting witnessed in the infamous earlier produced cannibal movies. Whenever the Action kicks into top gear the body count rises, and here the film makers spare no one as both women and children get caught up in the scenes of death deliverance along with male counterparts.

There is an unusually high quota of sexual soft core material here. The female form is displayed with little reservation, and the soldiers waste no time in raising their American flags!

With the Vietcong hot on their heels Captain Beck and his now rag tag party of diminishing numbers meet up with a small unit of Navy Seals, sent in to retrieve them by the American military. It’s no plane sailing though as the ramshackle Vietnamese junk they attempt to flee by water to the border is little match for the might of the Vietcong resources. The odds against Captain Beck and those under his protection become overwhelming and the astonishing revelations surrounding the Firebird bring about even more testing situations to contend with.

This is forward thrusting film making at its most refreshingly entertaining. Well staged big Action scenes deliver the goods by the handful, and the level of realistic ‘NC17’ rated situations of death and adult themes make this stand out from the abundance of similarly themed genre movies. The conclusion to ‘Firebird Conspiracy’ is a corker, and unravels a couple of original twists and turns to highlight the refreshing originality of this well made Asian Action Adventure flick.