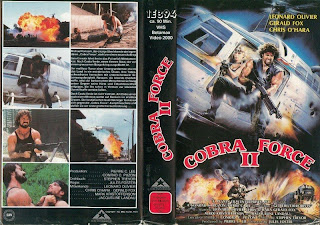 [also listed as “Get The Terrorist”; released on German VHS as “Cobra Force II”] 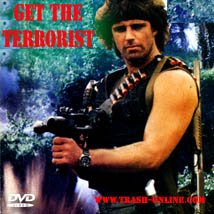 ‘‘We are trying to put the terror back into terrorism’’

Before Peter Jackson painted cinema screens a lush shade of New Zealand green, with the epic saga that is ‘The Lord Of The Rings’, the battle cry of Orks was super ceded by the mighty war bellows of ‘Commander’ (1988) star Craig Alan. Steely jawed, and ripped like a Rambo replica, here he goes toe to toe with a band of crazed terrorists in a role that demands he get the job done. A vengeful faction named People For Freedom sends a terror message to the by striking with fatal intent facilities, and recreational places where American citizens gather socially, resulting in the multiple deaths of dignitaries and innocent people alike.

An explosive opening sequence sets the vitriolic tone as a member of the People For Freedom, irreverently dressed in an all black priest tunic set off with a dark foreboding wide brimmed hat, makes a telephone call to the national press from a phone booth across the street from the Overseas Bank Of America. The message is received loud and clear as moments later the bank is detonated in a fireball of mass destruction. Sermon and last rights delivered by the miscreant man in black!

The American government calls upon ex special forces elitist Brock Towers, played by martial arts legend Frank Dux, and offers him $250,000 to head up his own hand picked team to head on into South America and bring down Randalph Maclaghlen, the People For Freedom’s leader. Maclaghlen is a fanatical communist with a personal grudge against his homeland of , rejected for his self attaining Capitalist beliefs and now misguiding a following in the name of freedom and democracy. He wants to protect the world from !

This is one of only a handful of in front of the camera roles that Frank Dux made as his martial arts skills clearly are his forte beyond that of acting. One time friend of Jean Claude Van Damme, and the apparent inspiration behind Van Damme’s hit movie ‘Bloodsport’ (1988), Dux often worked as a movie fight coordinator, and indeed assisted Van Damme in this respect on the Muscles From Brussels’ feature ‘Lionheart’ (1990).

Given just seven days to complete his assignment Brock Towers sets out, like Yul Bryner’s character Chris Adams from ‘The Magnificent Seven’ (1960), to locate some old fighting buddies from his military past. Klaus the German mercenary is discovered fighting off local’s looking for trouble in a bar in what turns into a well staged brawl. Next on Towers list is Strobe Walker, a one man army, incarcerated in a bars and bricks prison. Craig Alan plays the affable martial arts fighting machine, sporting a T-shirt that sums his character up perfectly ‘‘Kill ’Em All And Let God Sort Them Out”.

The three reacquainted seasoned professionals go outward bound to locate the next recruit, a weapons and reconnaissance expert named , played with scene stealing aplomb by Nick Nicholson, who has become a reclusive operator deep within the recesses of the South American jungle region. They receive a hostile welcome and are met by ’s feisty arms bearing daughter Nicki. A buxom blonde babe who shoots from the hip and packs a set of bazookas to rival those of Ilsa, She Wolf Of The S.S.

makes an appearance to spare his comrades blushes at getting ass whooped by G.I. Jane’s jungle fury, and everyone gets introduced and reacquainted. There is immediate sexual attraction between the gregarious Strobe Walker and Nicki, with naughtily musing, “I’d walk a mile just to smell her bicycle seat!” The evening turns into a round table sharing of the mission at hand and the morning sees the start of a plan in action.

stays out of the limelight and allows his daughter to hook up with Towers, Klaus and Walker as they set about making contact with a snitch loyal to Pierre, one with an ear to the ground and a foot in the camp of their prime objective Randalph Maclaghlen. With privileged information pertaining to venues targeted by the People For Freedom organisation and team strike a blow for the free world. The Action comes fast and furious as the bullets fly and the body bags are filled with toe tagged terrorists. Maclaghlen is soon very much aware of the infiltrators as his group take severe hits and he immediately issues the order to take the American soldiers of fortune out of the picture. The screen is filled with plenty of gun action and some juicy bloody body hits, including an arterial splatter shot to the head at close range.

Klaus infiltrates the People For Freedom’s jungle militia camp, whilst Strobe Walker lays down some airborne firepower cover aided by Nicki’s abilities as a helicopter pilot. Randalph Maclaghlen arrives at the scene to witness the assault as his small army of men run around like headless chicken. Alan Craig comes into his own here as the star Action hero Strobe Walker, eating up the screen and spewing bullets by the barrel load into the bad boy battalion. reappears in the nick of time, like a barnstorming bearded beret just screaming out to be modern day deuced by Nick Nolte for ‘Tropic Thunder’, bringing support troops to counter the overwhelming number of soldiers defending the camp.

Bullets and brawn match with heroic bravado Strobe Walker style as he shoots his way through the enemy line, on a direct course to head to head with his nemesis Randalph Maclaghlen. In the field of battle the two bulls of war take testosterone trade off to a new level, and Strobe Walker goes hell for leather to ‘Get The Terrorist’!
Posted by Unknown at 9:12 AM