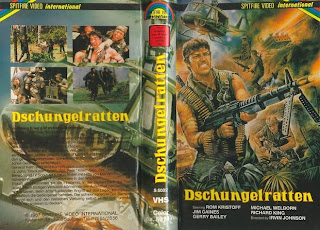 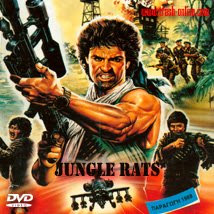 When a convoy, that includes General Douglas Conrad (Mike Monty) as a passenger, is ambushed by the VC in in 1968, the General and some of his men are taken prisoner and kept in cages in a secret underground tunnel. The U.S. Government sends five elite "Tunnel Rats" to rescue the General, which consists of team leader John "Blackstar" Smith (Rom Kristoff), communication specialist Jim "Batman" Benson (Michael Welborne), demolitions expert Randy "Boom Boom" Ellis (Jerry Bailey), hothead Pete "Killer" Rayo (Jim Gaines) and tracker Kit Scout (Richard King), a former enemy soldier. The mission is code named "Jungle Rats" and, right off the bat, Smith and Rayo don't see eye-to-eye (When Rayo wants to attack an enemy village, Smith tells him, "Shut your filthy mouth and get back to your place!"). While they are searching the jungle for the entrance to the tunnel, they are attacked by a platoon of enemy soldiers and forced to retreat (Rayo says, "There are a lot of gooks out there!"). When Scout is leading them on a new course, he steps on a land mine, but Smith saves him by using a boulder to replace Scout's weight (If Rayo had his way, he would rather see Scout blow up in a million pieces.). The group meet their inside contact, Mai (Marilyn Lang), in a deserted shack in the jungle (She says to Rayo, "Don't call me bitch!", when he wants to kill her) and she takes them down river to the entrance of the tunnel. Meanwhile, General Conrad and his men are being tortured (They deliver a human heart to the General's cell and tell him it belongs to one of his men!) and the exasperated General makes a tape recording renouncing the United States' role in the war to make the killing of his men stop. (Turns out the the gooks tricked him, as the heart delivered to his cell wasn't a human one after all.). After Smith and his squad split up to check out some "spider holes" (small tunnels manned by Vietcong snipers), they capture female enemy soldier Votimo (Nancy Hung), who is about to give them the General's location when Rayo rapes and kills her. The squad finally rescue the General, but not before Mai, Ellis, Benson and Rayo (who comes down with a case of tunnel fever) are all killed, either by the enemy or at their own squad's hands.


This Filipino war action film, directed by Teddy Page (BLOOD DEBTS - 1982), using the pseudonym "Irvin Johnson", is a pretty good action flick that has lots of firefights, explosions and even a few surprisingly graphic bits of male and female nudity. Filled with plenty of familiar faces in Philippines-lensed action films, it's nice to see Jim Gaines (RESCUE TEAM - 1981; COMMANDO INVASION - 1986) get a big role for a change, probably because he wrote the uncredited screenplay. Since he's the protangonist of the group (he doesn't trust anyone and wants to kill everyone and everything that gets in his way), he gets the best lines and does the most outrageous things (including the rape of Votimo, whom he brazenly kills before she can tell them the General's location and the cold-blooded murder of fellow squad member Ellis, whom he shoots just for being injured by enemy fire!). When he finally goes full-tilt crazy in a spider hole and tries to kill Smith, his death becomes one of the film's strangest moments. His story is the film's most engaging and director Page wisely devotes the lion's share of screen time on him. You're really not to sure what to make of him until the rape/murder of Votimo, when he reveals that he's nothing but a psychopath in a military uniform. If you like fast-paced war films, with plenty of bullet squibs and explosions (the slow-motion shot of Smith outrunning shacks blowing up behind him in the finale is quite impressive, as is Benson's self-sacrifice, where he takes out a slew of gooks while holding an active grenade), you could do a lot worse than JUNGLE RATS. The plot to this film was rejiggered a bit and remade as BATTLE RATS the following year. Also starring Ronnie Patterson, David Anderson, Eric King and John Miles. Never legally available on home video in the , the dub I viewed was ripped from a Greek-subtitled VHS tape. Not Rated.