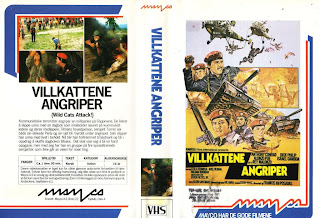 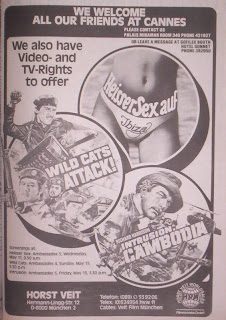 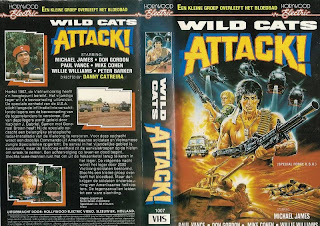 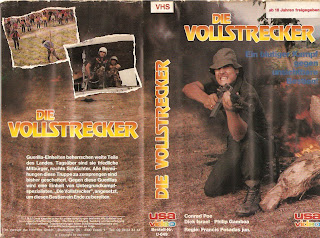 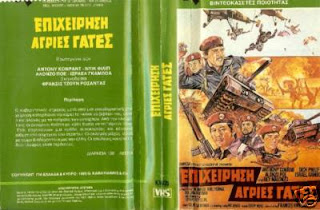 Here's a rare misfire: A clumsily paced and somewhat boring Filipino war actioner. A military base comes under attack by rebels, who steal a red diary containing top-secret information before they retreat. Sgt. Torez (Anthony Alonzo) is one of the few survivors of the rebel attack and becomes concerned when his girlfriend Perla (Leila Hermosa; BLIND RAGE - 1978), who was visiting him at the base at the time of the attack, disappears and is presumed dead. Sgt. Torez is promoted in rank to Lieutenant and is given carte blanche to put together a team of his choice to recover the red diary. He grabs a handful of people, all experts in their field, including a demolitions expert on death row for murder; an Army sharpshooter; a macho man who only has a few weeks left to serve; and an AWOL soldier who is good with a crossbow. The quintet's mission is to sneak into the mountain compound commandeered by the ruthless Commander Commandant (!) and his force of 250 rebels (Fifty-to-one? That's a mighty steep ratio!) and steal back the red diary. Well, they can forget about sneaking in, because as soon as Lt. Torez and his men parachute into enemy territory, they get into a firefight with some rebels, who radio-in to the Commander and let them know of their presence. The Commander makes it known in no uncertain terms that the five invaders are in no way welcome in his compound alive, so Lt. Torez and his men must contend with constant enemy gunfire and traitorous villagers as they fight their way to the compound. Lt. Torez still has time to contemplate the fate of his girlfriend Perla and has flashbacks to past conversations with her (clues which leads the audience to believe she may not be as innocent as Lt. Torez believes she is). Torez and his men make it to the compound and kill Commander Commandant, only to discover that the red diary isn't there. It's now in the possession of one Commander Sancho, which now means Lt. Torez and his men will have to go undercover as political activists sent to prison in order to trick the only person able to get close to Commander Sancho to break out of prison and lead them to the red diary. War is never easy, is it? Especially when your girlfriend turns out to be a total enemy bitch. 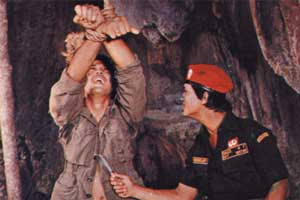 This early Kinevista International production (I had a good laugh when the opening credits states: "Kinevista International Superbly Presents", as if "Proudly Presents" just isn't good enough!), directed by Frances Jun Posadas (THEY CALL HIM BRUCE LEE - 1979; WILD FORCE - 1986) and scripted by Clem Santiago (also the Line Producer), is full of lazily-staged action set-pieces and bad English dubbing ("Sir, I have to go over there to hit the head!"). While there are a lot of bloody bullet squib effects, the majority of the shooting victims merely grab their head or chest when shot, which cheapens the effectiveness of some of the battle scenes (Surely Lt. Torez and his men don't deliver head and chest shots on every kill? Or are they just that good?). That's not to say that there aren't some decent action scenes on display. The attack on Commander Commandant's compound contains some good slow-motion scenes of grenades being thrown and blowing up their targets, resulting in some nifty explosions. Unfortunately, right after that sequence the film stops dead in it's tracks and takes forever to recover, thanks to the film's new direction where Lt. Torez and his men go undercover as prisoners to infiltrate Commander Sancho's compound. It takes nearly thirty minutes for the action to kick in, an eternity to viewers when all you have to entertain you is some hilarious dubbing ("It's dangerous if they find the body. Let's hide it" and one of Lt. Torez's men singing "Camptown Races" before attacking Sancho's compound.). Bad dubbing only goes so far and thirty minutes without a single death is stretching it to the limit. The "surprise" ending, where a certain female is revealed as the enemy ringmaster, is telegraphed early on. Oh, and did I forget to mention that the theme music from RAIDERS OF THE LOST ARK (1981) is "borrowed" for the climatic battle scene? This may be one of the rarer Filipino war actioners, but WILD CATS ATTACK! is not one of the better ones. Not a total misfire (like most Filipino actioners, everyone is so earnest, no matter how ridiculous the situation), but it's still a disappointment. 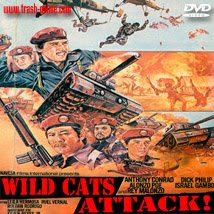 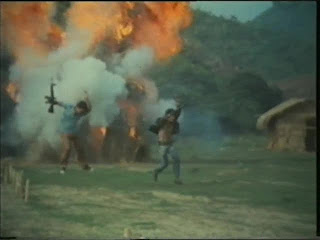 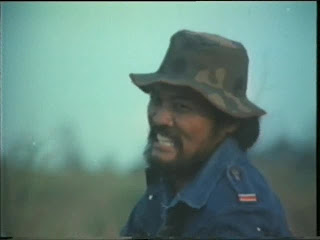 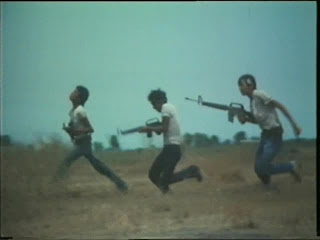 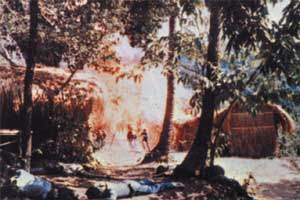 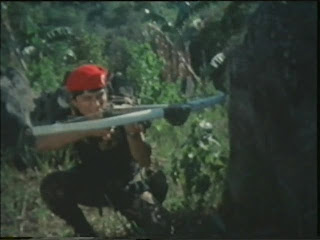 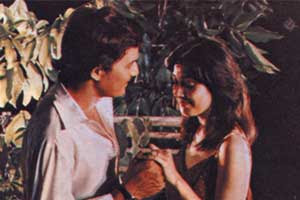