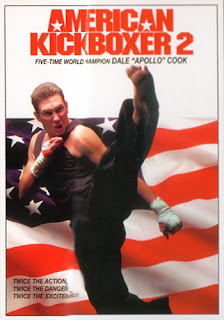 Five-time world kickboxing champion Dale "Apollo" Cook and kung fu expert Evan Lurie team up in this so-called "sequel" that has absolutely nothing to do with the 1991 John Barrett film. Instead, it is a typical B-grade buddy action film that barely has highs and a series of lows.

Mike Clark (Cook) is a policeman trained in the martial arts. His ex-wife, Lillian (Kathy Shower), and her new husband Howard (David Graf) have informed Mike that Lillian's daughter Susie has been kidnapped by the evil Xavier (Ted Markland), who is asking for a ransom of two million dollars. Mike's world is upside down when he learns that someone else has learned of the kidnapping. Enter David (Lurie), a martial arts instructor who is the reason why Mike and Lillian ended their marriage. When Mike confronts David, the two come to blows at a local parking lot.

Disguising themselves at first as gardeners for Lillian, the rivalry between David and Mike continues to escalate until Lillian finally puts her foot down and tells the two they have to stop their fighting. There is one little twist to the story: Mike or David is actually Susie's father. The two bicker about who is the father, but as they get closer to Xavier and his goons, they soon realize that they must put aside their differences and work together if they ever hope to get Susie back to Lillian.

We've all the seen the buddy action film before, like LETHAL WEAPON (1987), TANGO AND CASH (1989), and THE LAST BOY SCOUT (1991) to name a few. This standard B-grade film is nothing out of the ordinary, but our two heroes both were involved with the same woman. One is a hot-headed cop who seems to be more about busting the bad guys with his fists and feet and even at one point, admits to beating his wife when he learned of her affair with hero number two, a suave martial arts instructor. These two bicker more than a married couple, even when they do actually work together and despite this trying to be some comic relief, it just looks pretty bad.

To be perfectly honest, there is no reason why this film should have been called AMERICAN KICKBOXER 2. First of all, it has nothing to do with the original film that starred John Barrett as a former kickboxing champion on a road to redemption. Most likely, the filmmakers wanted to cash in on the AMERICAN KICKBOXER name but the fact that this is nothing more than a low-grade buddy action film with some okay (and I say that loosely) martial arts fights, but more firepower if anything.

Don't get me wrong. Dale "Apollo" Cook was a five-time world kickboxing champion who got his start in with DEADEND OF BESIEGERS in a small fight against Yu Rong-Guang but definitely compared to that film, this film has cheap fights as if the stunt coordinator figured to let the two leads just go for it. Evan Lurie, an expert in various styles of kung fu, looks like he has better moves than Cook but his role of a playboy seems to somehow make him feel a little "cheap" at times.

Overall, the movie is just pretty bland and standard. Even the action isn't satisfying enough despite the appearances of Dale Cook and Evan Lurie. AMERICAN KICKBOXER 2 is definitely not an anticipated sequel. For the real sequel to the original AMERICAN KICKBOXER, see another film that came out in 1993, TO THE DEATH

There are inspirational movies that come across only one time in your life and truly define your existance for being. A movie that answers all the essential questions to what the meaning of life is, very few films have tapped such a nerve but American Kickboxer 2 offers a thesis of what brilliant is all about, starting with the world's greastest actor. The man who's charisma and acting talent stunningly recalls a potentional that even oscar talent cannot establish. In other words the performance of Dale "Apollo" Cook is truly what defines the measure of a thespian. Why just sample his opening sequence. Which starts with Dale running in a pink shirt, with a pistol. He quickly gets his gun knocked out of his hands but he thankfully he knows how to kickbox and therefore he beats up three Filipino thugs who are supposed to pass for American. The Apollo's sparkling conversation is only the tip of the iceberg as he says to his partner.

"What's wrong, the hard work's over!" (Obviously not given that he's going to have to file paper work for beating the crap out of three suspects when they were pursuing only one) The partner's reply is equal in astonishment.

"You're not Dirty Goddamn Harry, and you're not making my goddamn day! You pull this lone ranger shit again and you can say goodbye to Tonto!"

"Alright Tonto calm down, me and dickhead are going for a little walk!" This clearly defines that 'The Apollo' is a plays by his own rules cop and given that he wears pink shirts, he's obviously got something to prove. And before you can say Macho Man, just remember one of the Village People was a cop. Anyway this is our first kickboxing protagonists in this greek mythology that is depicted in the 90 minutes of American Kickboxer 2.

When we are introduced to the second kickboxing protagonist, we learn that he is a true lady's man and I believe him, any man who can score dates with that grotesque mullet, is someone who indeed has game. We witness the man's entrance as he rides a motorcycle and then we meet him as teaches karate to a slew of students. And how does he conduct his class? By beating up everything that moves except for the shorthaired hot chick (Well I think she's hot, I was pretty drunk when I saw this) because he plans on fucking her, and we all know that bruised women aren't as fun to screw as the non-bruised. Although Jean-Claude Van Damme, Steven Seagal and Sasha Mitchell would argue different. We witness how brilliant this man is because he uses "Chinese balls" to relax and it's here we witness more excellent dialog.

This is our other kickboxing protagonist.

Tackleberry: Call the police (but not Steve Guttenberg...)

Genre favorite according to the screener: She's been just been kidnapped (I don't think anyone debates that) so you have time for me now!

Tackleberry: Tell him you can't talk, we have to call the police.

Genre favorite: Put me on a speakphone, and tell your husband to SHUT UP! I want two million dollars, call the police or don't pay and you'll get Suzie back in little pieces, have a nice day!

So the our two kickboxing protagonists, The Apollo and Maleviolent Mullet team up to save our irritating moppet. Oh and one of them is the father. We by the way never find out who the father is, so we'll have to wait for the sequel which has Apollo and Maleviolent Mullet on the Maury show. However even though everything here is pretty much straight forward there are some brilliant scenes that require further analysis.

Prison sequence: The Maleviolent mullet finds himself in prison for impersonating The Apollo, he also pisses off the arresting officer so the A.O leaves the maleviolent mullet is still handcuffed in the prison, thus we meet the most hilarious sequence. An obvious Fillipino who is passing for Mexican talking in a very bad Mexican accent starts this sequence off with energetic greatness. The guy's name is Pollo Loco This is what is said...

Pollo Loco: BUBBA!!! HA HA HA HA HA, You turn me on homes, you even make my beard hard. (Looks over at a couple old white fat guys) You want to take his place! I'm so hard and I don't care who I stick it to, i'd rather have you my glorious machaco, Call to your mother!"

Pollo Loco: That's me! I'm Pollo Loco, and my pollo is going up you collo! (To the maleviolent mullet) Bubba!

Another Fillipino thug: Hey dude you got bigger tits than girlfriend!

A fight sequence occurs with Maleviolent mullet kicking everyone's ass and then coming after Pollo Loco, who is so scared that he runs himself into a wall. (On purpose) Suffice to say this guarantees that this is the best thing ever.

More silliness occurs but I really don't want to give it away. Let me end it by saying American Kickboxer 2 is, well I can't because no language or science can describe such a movie. It simply is the pinnacle of greatness, I mean what can be said about other nuggets of dialog like To Wit:

"Your ass is grass, yeah and we're the lawnmowers!"

"The only peace you care about is the one swinging between your legs!"

"You fucked my wife, you think it would've hurt me any less if you would've kicked the shit out of me!"

"I don't change, and my little phoebe don't change!" (Oh yeah I forgot about the gay uncle)

"What is this shit? Professional wrestling!"

...and Ted "Genre favorite" Markland who beats a guy to death with a tonfa, with an expression of such hilarity that it just begs to be seen.

By the way, our Porn Star mom, comes up with the money to pay the ransom by paying 20 million dollars to her gay uncle, who only has to put in 1 million dollars. There are many ways to raise money for ransoms, this is the only one I never would've thought of. And two kickboxing heroes who constantly take time out and kick each other's asses. American Kickboxer 2 is grotesquely, insanely, relentlessly surreal. With moments of true epic genius. If you want to laugh your ass off for 90 minutes straight, grab this sucker, get drunk, get high and let the laughter flow.