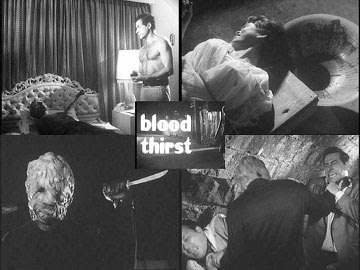 [also released as "Blood Seekers" and "The Horror From Beyond"]

From the clothes, hairstyles and black and white film grain Blood Thirst looks like it was filmed in the by an American production company around the mid Sixties, but wasn’t released until 1971 on the bottom of a double bill with British vampire movie Bloodsuckers (1970). Even in 1971 Blood Thirst would have seemed like an anachronistic curio – quaint, and for the most part uneventful, until the ludicrous ending’s payoff where we see the film’s chewed bubblegum-faced monster. Then, and only then, can I say, baby, all is forgiven.

Chubby Vic Diaz (and let’s face it, it’s not a Philippines B film without the seedily lovable Vic) plays Inspector Ramos, a Makati policeman on the trail of missing hostesses from the Barrio Club, a downbeat tourist trap run by the suspicious Senor Calderon. When the girls turn up hanging upside down and drained of blood from cuts on their arms, he sends for his old friend from the States, a cop named Adam Rourke who, as a New Yorker, is obviously used to seeing ritual murders. Posing as an “Ugly American” on a writing assignment, he goes undercover at the Barrio Club, asks one too many questions, cracks jokes like a proto-Arnie while shooting a would-be assassin, and turns out to be an ill-tempered ladies man with his eye on every Caucasian-looking woman in . Just like every sleazy Hawaiian shirted white guy on a hayride.

His eyes settle on both Inspector Ramos’ adopted sister Sylvia, who resists Rourke’s questionable charms until she can no longer stand it, and on the Barrio Club’s featured attraction, the exotic dancer and blonde Peruvian bombshell named Serena. It seems her beauty is more than skin-deep: it’s vein-deep, and may be the still-beating heart of a blood cult of Mayan or Incan origin – or older, we’re never quite sure – in which Golden Goddesses are kept eternally youthful with the blood of club hostesses. The Golden Goddess theory may explain, though not fully, why Serena looks more Swedish than Peruvian, but definitely won’t point to where she’s stashed her stewardess uniform for Scandinavian Airlines... 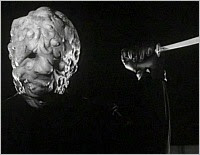 And so to the “horror” element: a blood cult, a bubblegum faced monster waving a knife at a young girl strapped to an altar. And…that’s pretty much it. It’s an odd film reminiscent of an undercooked episode of Hawaii Five-O minus the pineapple, that’s more interested in its mystery angle than the gore or supernatural elements. It also feels empty, and not just plot-wise – Blood Thirst is the only film I can recall that makes a city of over 10 million people seem uninhabited. Still, it’s an interesting 73 minutes, more for what it is than what it does: a cheapo spookshow which predates the John Ashley/Roger Corman deluge of Philippine horrors by several years. And, to be fair, it’s not every day you see a monster clobbered to death by an undercover cripple’s fake leg.

dam: There’s a killer on the loose… a homicidal maniac with delusions of ancient history. Now, can I use your phone?

Robert Wilson Mercy, the smug big-chinned former stuntman and bit player who plays our Ugly American hero, has made his presence felt on the net recently, leaving some outrageous claims in unsuspecting chatrooms: that he made more lost films in the Philippines with director Newt Arnold, who he describes as one-eyed and with a malformed hand; that he was offered the role of James Bond in a serious version of Casino Royale – but he was making a B-film in Manila at the time and couldn’t get out of the contract; and that he’s stalking the producers of the next Bond film offering his services as Daniel Craig’s nemesis. I say to Robert Wilson Mercy: the world may have gotten Woody Allen as James Bond instead, but we still have your career’s crowning glory, the 1971 Blood Thirst.