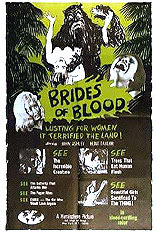 The lure of the throughout the 60s and 70s was intoxicating for low-budget filmmakers - you could produce an exotic potboiler with genuine tropical locales for a fraction of the cost in . With Hemisphere’s successful rerelease of the 1959 Terror Is A Man - Eddie Romero and Gerry de Leon’s reworking of - as “Blood Creature”, producer Kane Lynn wanted more “Blood”, and so instructed Romero and de Leon to co-direct an even sleazier jungle shocker.

And so begins Brides Of Blood. On a steamboat are Peace Corps volunteer Jim Farrell (former matinee idol John Ashley), the radiation expert Dr Henderson (Kent Taylor) and his frustrated wife Carla (played by a former stripper with the unlikely but appropriate name Beverly Hills), a top-heavy B beauty with a shroud of hairspray around her polyethylene hair mountain and who manages to walk through a jungle without soiling her white shoes.

They land on , a so-called tropical paradise literally crawling with mutant plants and with a native burial seemingly every 10 minutes. The group take refuge in the mansion of the elusive Estaban Powers, an ageless patriarch whose bald, disfigured and bug-ugly manservant Goro whips his small army of semi-naked dwarves (again with the dwarves!). Dr Henderson notices alarming levels of radioactivity in the island’s maneating plants; the trail of green radioactive slime leads from the mansion through fog-shrouded jungles to a giant grotesque stone idol where virginal village girls are sacrificed to a lecherous (not to mention ludicrous) monster on the prowl. Ever the lover boy, super-suave Ashley tries desperately to save a native girl from her fateful honeymoon as one of the “brides” of .

Female patrons in its numerous drive-in runs were offered plastic wedding rings so they would be promised to the monster. Cheesy, yes, and old-fashioned even for 1968, but so successful was its exploitation hyperbole that Ashley, Romero and de Leon returned the following year with Mad Doctor Of Blood Island - not strictly a sequel, but a repeat of the formula with more flesh on display, a less laughable mutant creature on the prowl, and more green and red ooze in equal measures. Then came Beast Of Blood in 1970, completing the so-called “ trilogy” and setting the benchmark for the crimson-streaked wave of made-in-Philippines exploitation films to follow.