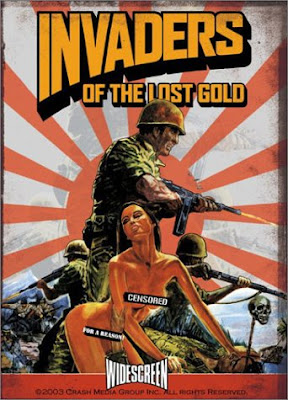 1981 - Invaders Of The Lost Gold (production company unlisted in credits) 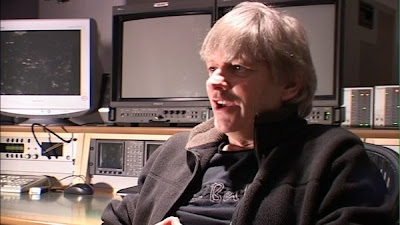 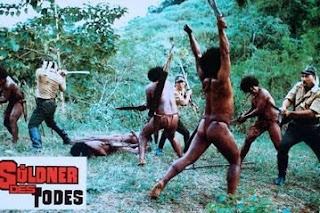 This film, originally titled HORROR SAFARI, is one of those films that's so bad it's good. It starts out during the end of World War II, where a small troop of Japanese soldiers are carrying 10 crates of gold for the war effort through the jungles of the Philippines, They are attacked by a group of headhunters, and the Japs hide the gold in a cave where only three of them survive to escape. The rest end up as heads on sticks. 36 years later, Edmond Purdom finds out about the lost gold and tries to get the three elderly Japenese survivors to help him find it. The first one is shot and killed by Purdom when he refuses to co-operate and the second one commits hara-kiri when he finds out that his commanding officer was killed. Purdom convinces the third (Harold "Odd Job" Sakata, in one of his final film performances) to help him find the gold for a 25% cut. Purdom hires arch enemy Stuart Whitman to help him on his quest since he is the best jungle man in the territory. Also along for the ride are Laura Gemser (who has a nude swim scene in which she mysteriously dies), Woody Strode (who has a fight with Sakata), Glynis Barber, David De Martyn and a bunch of disposable native Filippinos. After fatal attacks by snakes, alligators, an unstable rope bridge and booby traps, the dwindling crew get closer to their destination, and the ultimate showdown between Purdom and Whitman.

Directed without an ounce of flair by Alan Birkinshaw (KILLER'S MOON - 1978) and produced by the infamous late Dick Randall (PIECES - 1982; DON'T OPEN TILL CHRISTMAS - 1984, SLAUGHTER HIGH - 1986, who seemed to use Purdom in a few of his films), INVADERS contains a lot of nothing going on throughout most of it's running time, just a ton of infighting and some short spurts of gore. The international cast is highly unusual for a film of this low budget (and obviously a cash-in to the then box office smash RAIDERS OF THE LOST ARK), but nothing really happens. Just trekking around jungle scenery, lots of arguements and a very quick ending. If the rest of the film were only as good as it's first ten minutes, we may have had some enjoyment here. Stuart Whitman later made a similar film, TREASURE OF THE AMAZON (1985) in Mexico for late director Rene Cardona Jr. (BEAKS: THE MOVIE - 1987). An All American Video Release that's now available on DVD in widescreen form from Mondo Crash. Not Rated. 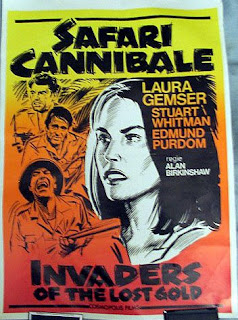 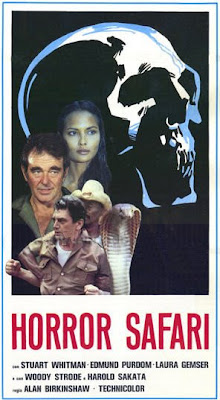 Lawrence P. Raffel's review from the Monsters At Play website:

Ya know, there are films that challenge us because of complex characters or story structure. Perhaps there are situations presented that are so intense, we could never imagine having to suffer through them. These are films that impact our lives, they leave us contemplating for days after viewing and many of these films become our favorites. They are the product of talented filmmakers, those who have a real grasp on the medium and are born storytellers. Then there are films that leave us scratching our heads because those involved in its creation, no matter how hard they had tried, have proved that they'd be better suited for the mailroom at a major studio, rather than behind the camera. Sadly, Invaders of the Lost Gold is one such film. 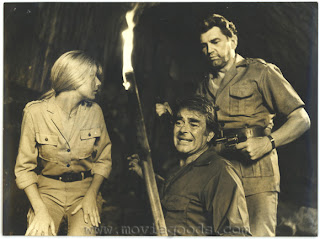 The story that is about to unfold is so inane and nonsensical that I don't even know where to begin. I'll be honest, a lot of it isn't even worth going into at this point. It's such a mish-mash you'll probably have popped an entire bottle of aspirin before the end credits have even had a chance to roll. The story begins in the 1940's deep within the jungles of the Philippines. A group of Japanese soldiers are escorting an undisclosed amount of gold when they are attacked by a group of natives. Some violence ensues and the Japanese that aren't beheaded, manage to escape to a nearby cave with the gold. They leave the gold intact, vowing not to return unless all have been able to attend the reunion.

Flash forward 36 years later to Tokyo and an asshole American businessman named Douglas Jefferson is trying to put together an expedition to find the hidden fortune. He approaches some Japanese soldiers (From the opening of the film? Your guess is as good as mine) and isn't successful until he reaches the third gentlemen (he kills the first after he refuses and the second commits suicide!). Anyway, our lecherous businessman convinces the Japanese guy to go in for something like 25% and Douglas is on his way to finance the expedition. Somehow he manages to get the $$ and puts together a motley crew of explorers (including Janice, his sexilicious daughter) and about 45-minutes into the film they hit the jungle. 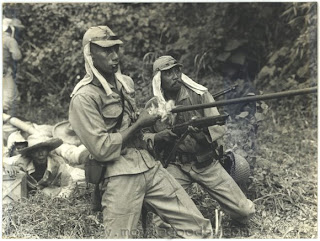 Once they arrive, we're given information (limited information at that) about a possible double cross. There's a snake and crocodile attack and Laura Gemser (looking gorgeous as ever) stops by with just enough time to mysteriously die while taking a nude swim by a waterfall (this part I didn't mind so much). One by one the group starts to perish as they gain ground toward their fortune. Who's behind the double cross? I'm not sure that any of us should even care at this point!

Invaders of the Lost Gold is so beyond bad filmmaking, it's quite sad actually. The opening scene has promise and is pretty nifty with the jungle assault and all, but once we hit present time and the crew is assembled, It's hard to tell where the story is going. Before we even understand why they've chosen whom they've chosen, the boat is ready to roll and being loaded up! All of these people seem to have ties with one another, yet none of this is ever fully explained. Since we don't really know who these people are, of course we don't care a bit, so there's hardly any drama to be found. Exploitation elements are so light, that it's difficult to even enjoy Invaders on my normal perverted scumbag level as well! 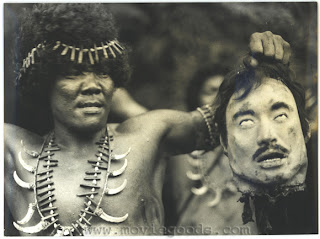 Crash Cinema has released Invaders as the first title in their Mondo Crash line. Quality wise, this one is really rough around the edges. There's no shortage of print damage, with plenty of specs and scratches randomly found throughout. Quality is quite spotty as there are some scenes with fairly solid colors and very little damage while others seem to have hit the jackpot of anomalies. For what it's worth, I doubt that it's even necessary for this flick to be cleaned up any more than this - it serves its purpose well...as the main attraction of your next crappy movie night (c'mon, we all have 'em!). Audio is pretty remarkable in that this flick features one of the worst dub jobs that I have ever heard! Dubbed voices of dying soldiers and natives in the opening scenes are beyond laughable - this flick is screaming for a makeover from the retired fellas over at MST3K. There is some slight background noise, but for the most part, dialogue is clear enough in all of its terrible glory.

Extras include some completely unrelated kung fu trailers. It's nice to see Crash Cinema broadening their horizons and they have some interesting flicks coming out under the Mondo Crash line including Death Dimension and Beat Girl. While Invaders didn't exactly float my boat, I'll bet that Crash did everything they could with what they've been given. If you're looking for a film that's so bad...well it's just bad - then check out Invaders. Otherwise, keep a close eye on Mondo Crash's upcoming line, because they've got some real diamonds in the rough on their schedule. I'll tell you one thing about their release of Invaders though - the cover art certainly kicks ass! 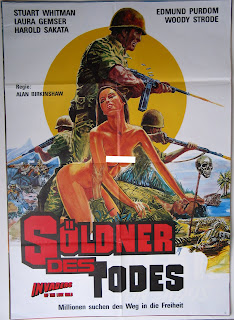 Invaders Of The Lost Gold has really only one thing in it’s favor – it’s made up of an all-star exploitation cast. Harold Sakata (Odd Job from Goldfinger), Stuart Whitman (who appeared alongside an oiled up Lee Van Cleef in Captain Apache and a ton of other b-movies), Woody Strode (Kingdom Of The Spiders, Once Upon A Time In The West) and Laurie Gemser (of Joe D’Amato’s Emanuelle series) all have large roles in the film.

The story starts off with a bang. A troop of Japanese soldiers in the Philippines during World War II are attacked by a tribe of blood thirsty savages (who, sadly, don’t appear to be cannibals) and the gold they are escorting through the jungle becomes lost when the savages chop off their heads.

Cut to the swinging seventies and an entrepreneurial chap decides to hire on Mark Forrest (Whitman) to lead an expedition consisting of himself, his foxy blonde daughter, his assistant Cal (Strode) and his henchman Tobachi (Sakata) into the jungle to find the gold and in turn make themselves all filthy rich.

Once they’re there, they meet up with Forrest’s ex-girlfriend Maria, played by Laura Gemser, who five minutes later takes off all her clothes, jumps into a lake for a swim, and dies screaming only to wash up on shore a few minutes later. How or why she dies isn’t important I guess, as we’re never given a reason for it. She just takes off her clothes, goes swimming and starts to scream. Ummm….ok. Sure.

Anyway, back to the story. Eventually other members of the crew start getting knocked off, and only Forrest and the foxy blonde daughter make it to the cave to find they’ve been double crossed by Forrest’s old partner from back in the day.

This movie is a total mess. The first ten minutes are great and the last twenty or so are pretty solid, but the middle drags a bit and there are so many loose ends left dangling that it can really make your head hurt if you try and sort it all out. That being said, it does have a small amount of charm, particularly if you’re a trash film aficionado like myself as it’s incoherence and gratuitous nudity and violence do make for a few stand out moments.