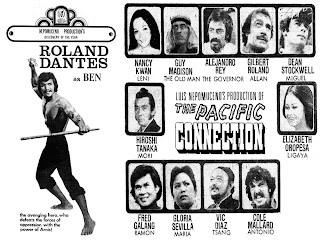 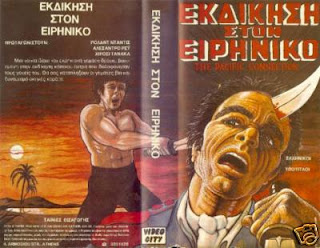 Every year a lot of movies are made in the , often produced with American actors and directors filling in the gaps between their Stateside assignments, but until the advent of video very few were seen anywhere else. There are exceptions of course: the Eddie Romero-directed Blood Island films (with John Ashley) were given an extended release in the US, and Roger Corman has had various co-production deals going since the early '70s - co-financing and distributing films by prolific Filipino director Cirio H. Santiago. But usually these movies remain effectively invisible in the West, and actress Nancy Kwan had a second career in Filipino movies during the '70s that has gone almost entirely unrecorded.

One film that does sometimes appear in lists of Kwan's work is The Pacific Connection made by Filipino mogul Luis Nepomuceno. It's a martial arts movie set in the mid-19th century and, with its locations and period galleons, must have had a relatively large budget by Filipino standards. Nepomuceno served as director, producer and writer and it was filmed at his own studio complex on the outskirts of . The film is concerned with a vendetta between wrongly imprisoned farmer Ben (Roland Dantes) and the Governor (Alejandro Rey) who murdered his parents. Ben escapes to an idyllic island where he falls in love with beautiful local girl Leni (Kwan). Eventually the Governor hires a samurai assassin to hunt Ben down and he is forced to fake his own death. Ben is taught the higher martial arts by the mysterious Old Man (Guy Madison) and eventually overcomes his adversaries.

This is an immensely enjoyable movie; Dantes is an expert in arms (combat using sticks) and his skills are used to great effect in several well-choreographed and brutal fight scenes. The film does have its sleazier moments (the Governor's fairly graphic castration as he tries to rape Ben's mother, for example), but unfortunately it is top-heavy with redundant dialogue and the narrative is frustratingly unfocussed and episodic -at one point Ben is sent on a quest to find a magical reed (that will provide him with protection from wounding) yet there was no previous indication of mysticism in the plot. While by no means a classic lost film, it is recommended as a fascinating curio and is a must for all devotees of martial arts on celluloid.