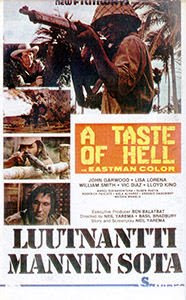 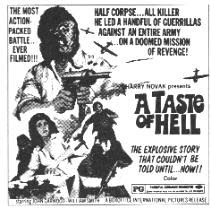 William Smith on A Taste Of Hell in an interview with Chris Poggiali, Shock Cinema #12 (1998) p.4

Chris P: I get a kick out of that scene in The Losers where John Garwood is showing Houston Savage how to use a machine gun - and Savage was a Green Beret in real life!

Smith: Yes, he was. That was funny. Yeah, Garwood’s a nice guy. I did a movie for him called The Beast, over in the again. He changed the title to A Taste Of Hell. It was a pretty good little movie. 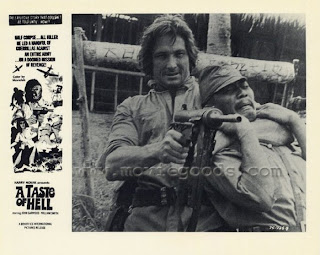 In 1942, a sadistic fat japanese (Vic Diaz) has unarmed captive Filipino freedom fighters shot, stabbed and blown up with bazookas. Lt. Barry Mann (Garwood) survives as a pathetic horribly burned limping suicidal mute, out for revenge and still in love with Maria (Liza Lorena, who has romantic flash-backs). She's put in a hot box and the colonel orders other rural women hostages to be used for sex. Its fairly quiet, slow and tame (it was rated PG!), until Jack (William Smith with long 70's hair) returns with a small army of peasants. After a stand-out decapitation scene and a battle, EVERY (!) major character dies except for the crying little hunchbacked boy Pedro. Lloyd King co-stars as a sympathetic Japanese Captain. This was originally released by Boxoffice Int. Garwood had been in several biker movies, including THE LOSERS with Smith. Diaz, the hardest working actor in the , is also still a popular comedian. 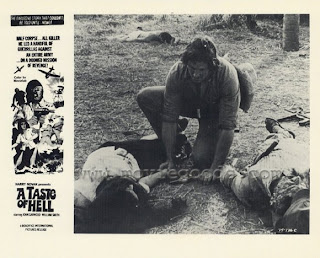 Half Corpse... All Killer

The screen rolls in...a vibrant yellow font appears to you and reads: 1942. You become unfamiliar with your surroundings as you discover your no longer in . This low budget WW2 epic depicts a group of Philippine militia warring with the more powerful and violent Japanese army. Your introduced to Barry played by John Garwood who is the platoon leader, and when he fails to give up his post to the Japanese he is shot and rolls into a ditch. Traveling down a hill and into a murky lake, Garwood becomes a victim of his own demise. Disfigured and partially mutilated the platoon leader makes it back to the barrio discovering that in the months of his absence life has gone on without him. 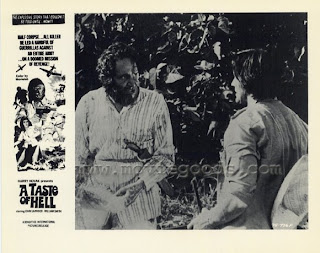 He Led A Handful Of Guerrillas Against An Entire Army... On A Doomed Of Revenge!

After the towns people have faced the hardships of public executions and random slayings, their most beautiful women are held captive as prisoners on the Japanese base. The remainder of the original militia, now led by Barry's best friend Jack, played by William Smith of Run, Angel, Run and Any Which Way You Can fame, re-group and form a powerful squad that plan on attacking the heavily armed Japanese base.

The explosive story that couldn't be told until... Now! 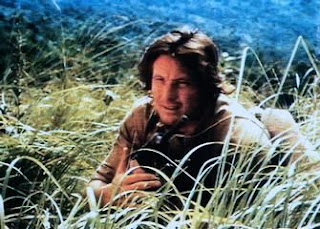 In the meantime, Garwood who after several not-so- warm-welcomes with the towns people, is branded as a "Witch". While unsuccessfully revealing his identity to his former girlfriend, he is attacked by a townsmen who fathers a hideous hunchback who wants to be his new friend because his "...daddy made him ugly too." Rather then befriending the hunchback he slaughters his father right before him and escapes to the mountains.

The most powerful, action-packed battle... Ever filmed!!!

The finale of the film is the best. The militia led by Smith enters the army base leading to one of the cheesiest war scenes in all of film history. Garwood saves his former love from the Japanese base when he dresses up like one of the generals and sneaks into the camp. Smith, who secretly has feelings for Garwood's girlfriend, sees her walking away with one of the Japanese soldiers and shoots him on sight. As he runs over he sees that not only was the soldier, not one of the Japanese, but that it was his best friend Barry. Then to make matters even worse Maria, Garwood's girlfriend was shot in the midst of the gunfire. Leaving his secret lover and best friend dead at his knees, he looks up in agony only to be gunned down himself. Then after everyone is dead and the base is filled with the blood of many brave soldiers, the hunchback returns to see that his friend Jack is dead, the "Witch" is dead, and Maria...who he also had a crush on...is dead. Whoa! What an ending!

Behind enemy lines in the , two American officers fight the Imperial Army of Japan alongside a Filipino guerilla outfit. It's a constant uphill battle, and a real "Taste of Hell."