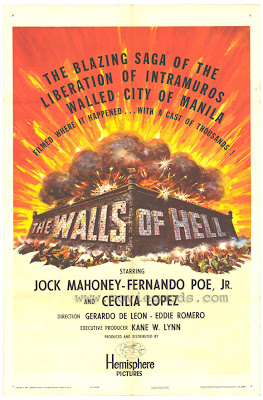 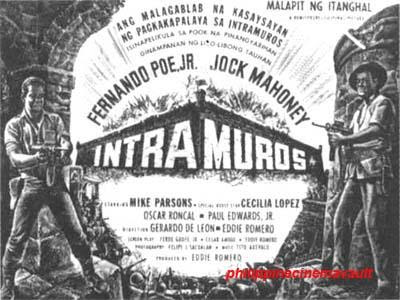 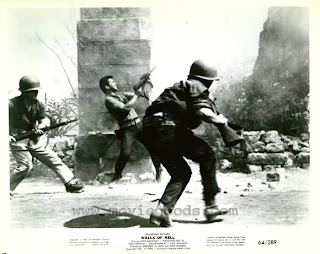 The , it would seem, is a country that was destined to relive the trauma of the Japanese invasion through their cinema. Unlike Cavalry Command, there’s not many movies about the American-Philippines War of 1899, a shameful period of betrayal and capitulation. World War 2, on the other hand, produces the kind of instant heroes that populist cinema thrives on, and from the 50s right through until the 70s and 80s there were literally hundreds, if not thousands, of Tagalog-language war movies featuring Pinoy guerrillas proudly fighting side by side with American troops to liberate the islands from the retreating Japanese.

The Walls Of Hell is set in the final stages of the Battle of Manila, and filmed where it happened - behind the actual walled city of , the oldest part of built by the Spanish in the 1600s. Despite the Japanese high command declaring an “open city”, the remaining troops holed themselves up behind the ancient, almost impenetrable walls and embarked on a suicide mission to inflict as much damage on their would-be captors, and ’s civilians, as possible. It took 3 weeks of throwing 10,000 shells an hour into the walled city to finally retake Intramuros at an appalling cost to culture, history, real estate and human life, and without a single Japanese soldier left alive.

The Walls Of Hell is initially framed through the eyes of a visiting journalist intent on capturing the true spirit of ’s fighting men. He finds it in Jim Sorensen, played by king of the stuntmen and one-time Tarzan Jock Mahoney. Alternating between gruff, stoic and violently angry - his Filipina wife Tina is missing and presumed killed by his own artillery – he’s fighting his own war, according to fellow soldier Papa (Mike Parsons), a lay preacher turned medic, and the film’s Catholic voice of conscience. 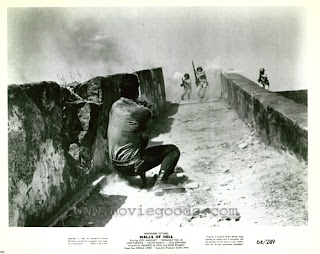 The focus changes with the appearance of Nardo, a guerrilla from inside played by the all-time king of Filipino actors, Fernando Poe Jr. He was both the Marlon Brando and Elvis Presley of the with over 200 films to his credit which, with the exception of this and Romero’s war movie The Ravagers made the following year, never made it beyond the islands’ borders. His earnestly downbeat performance and patriotic speeches in The Walls Of Hell use his own voice, and he proves to be a fine local lead in an English language picture. FPJ, or “Da King”, died from a stroke in 2004 just after an unsuccessful attempt to follow his friendly rival and regular co-star Joseph Estrada into the Presidential Palace, and so why he was never a successful export like Weng Weng, he will never be able to explain.

At first he’s suspected to be a spy working for the Japanese, but shows the soldiers a passageway to get in to – and for civilians get out of – Intramuros. The three hundred year old catacombs, now eerie smoke-shrouded sewers, are lit in a dramatic way to resemble the corridors of Hell. In fact the entire film appears to shake; the soundtrack of sparingly-used military snare over a ceaseless artillery barrage lends a very real sense of doom, as do the wobbling cameras and ever-present smoke and fires. Director Eddie Romero once said he WISHED Filipino filmmakers could work with a B-Grade budget, and I’m sure the film is much smaller than he would have liked, but by telescoping the action to tight, claustrophobic locations, the parts add together to make a vivid whole. 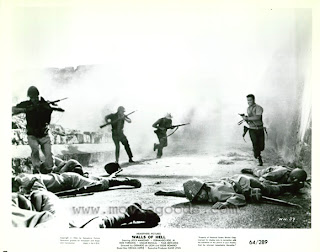 The Walls Of Hell lists two directors, both enshrined as National Artists of the Philippines, and marks a truly successful collaboration between the two directors: Eddie Romero, primarily a screenwriter before moving into directing, concentrates on the actors and the unfolding drama, while the older Gerardo de Leon is more interested in frame composition and the film’s gorgeous black and white aesthetics. Ferde Grofe Jr took time off from working on George Montgomery’s tropical action films to contribute to the script which was filmed simultaneously, as Romero often did under his “Filipinas Productions” banner, as a Tagalog-language version called Intramuros. Naturally in the , FPJ received top billing.

It’s a gung-ho war film Filipino style by a primarily local cast and crew and with added, rather creepy sense of history by filming on the actual locations. I’m sure the Ghosts of Manila are watching as we fearlessly scale The Walls Of Hell.