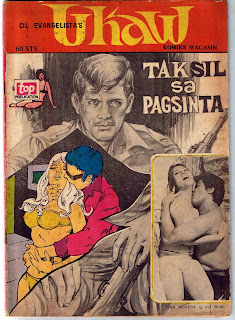 It is not known exactly when the first Bomba Komiks appeared in the . In the early 1960s, some fly-by-night publishers began issuing underground komiks with adult contents. One of these was Akda Komiks, first published in 1964.

Although this komiks did not contain any frontal nudity, it nevertheless featured stories with sexual contents. During this time, komiks publishers were not yet so brave in offering graphic sexual contents. This changed over time as more and more small-time publishers began issuing thier own Bomba Komiks.

By the end of the 1960s, there were already numerous Bomba Komiks sold discreetly on the streets of , this time containing frontal nudity. Many veteran komiks writers and illustrators were lured into the additional income offered by the Bomba Komiks. Understandably though, they rarely used their real names in writing or drawing, preferring to use pen names instead.

The most successful of the Bomba Komiks publishers was Cil Evangelista, a movie talent manager. His komiks gained cult status for featuring photographs of Filipin movie stars in the nude. 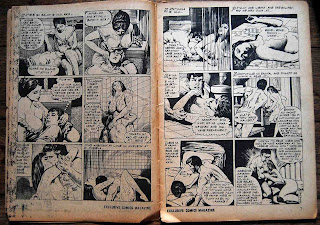 The Rise and Fall of Bomba Komiks

The years 1967-72 were the peak years of the Bomba Komiks. They were bought like hotcakes by middle aged men and women as well. Though they were not sold openly in newsstands, they were however hidden under piles of wholesome komiks titles. A slight hint from the purchaser would make the salesman offer it discreetly. The first of this wave was Pogi Komiks addressed clearly to an adult male audience. In 1968 came a whole slew of suggestively titled ones with the names of Toro, Barako, and Pil-Yeah!.

Don Ramon was constrained by the Golden Code, which was his publishing houses' set of editorial content for mainstream, conservative and old order komiks title. Such was his influence and that of his right hand man Tony S. Velasquez that their editorial guidelines were adopted by the industry body called APEPCOM (Association of Publishers, Editors of Philippine Comics Magazines). Any deviation from the Code was severely sanctioned by the komiks body.

Understandably, many legitimate komiks publishers complained about the proliferation of Bomba Komiks. The grand old man of Pinoy komiks publishing Don Ramon Roces himself could not ignore the tidal wave of cheap prurient titles engulfing the staid self-censored komiks titles that he published. So even he ordered one of his publishing houses ACE Publications to create a shameless spinoff of the then leading bomba komiks. The result was Pogi Magazine for Men with a tagline "Pilyo ngunit clean fun!" In our postmodern society this could rightfully be considered the predecessor of today's saucy Philippine magazines such as FHM or Maxim.

Pogi Magazine for Men featured the editorial vision of its editor-in-chief R.R. Marcelino who mixed daring semi-nude photographs of Philippine sexy starlets together with comic stories and feature articles on crime, the supernatural and the bizarre. His magazine would be clean sexy fun for the male audience, unlike his cheap and lurid competitors.

PinoyKomiksBiz blog of April 7, 2007 analysed the coming showdown as follows: "(Pinoy bomba komiks) was a genre that really challenged not only the APEPCOM code, but most importantly, the underlying conservative Catholic ideology behind it. If U.S. mainstream comics experienced the trauma of having been introduced to the senseless violence of a horror comic in the 1950s leading to negative public-wide discrimination towards the culture of comics reading, the Philippines later had the same equivalent through the introduction of sex/erotica or alleged pornography in a Bomba comic, that almost lead to a public-wide discrimination against all kinds of Filipino comicbooks, thanks again to the hysteria initiated by the Roceses' APEPCOM."

In September 1969 the controversial issue of bomba komiks came to a head. Religious and feminist organizations started to rally against the Bomba Komiks. A female contnigest of students led by APEPCOM member Fr. Rizalino Veneracion and aided by journalist Jose "Joe" Burgos staged an anti-smut demonstration and followed up with a march to the Manila Mayor's office, where they denounced the proliferation of pornography on newstands.

The acting Mayor of Manila Antonio Villegas ordered the confiscation of bomba komiks titles and a crackdown on its publishers. 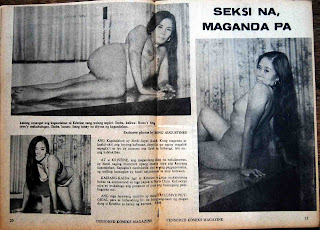 The brouhaha captured the attention of Filipinos. Leading Philippine writer and thinker Jose F. Lacaba had a more nuanced view of the social phenomenon and wrote in a Philippine Free Press issue in the same year that although he considered most of the komiks of this genre as "trash", he considered the anti-bomba komiks campaign as discrimation: "The chief objective to Pogi and its relatives seems to be that they are cheap, in both senses of the term, but specifically in the sense that they are inexpensive. This is where discrimination comes in. Anybody with more than 5 pesos is free to go to any thoroughly respectable bookshop and get a copy of Playboy, but the jeepney driver with 40 centavos to spare can’t go down the sidewalk to pick up Pogi without a horde of comstockians jumping on his neck."

"What particularly bothers me about it is that it seems like a manifestation of rank discrimination. For what is the specific target of this decency crusade? Those little magazines capitalizing in sex, locally produced, that have recently swamped ’s sidewalks and stalls. They’re cheap, costing from 35 to 40 centavos therefore easily accessible; and have been known by such flip and vulgar titles as Pogi, Toro, Barako, Pil-Yeah, and what have you—they’re proliferating so fast I can’t keep track of them all. Their pages are replete with pictures of burlesque dancers and movie starlets in scanty costumes and provocative poses, comic strip serials dealing with such taboo topics as impotence and venereal diseases, tik-tik type crime stories, instructional articles on subjects such as masturbation, and cartoons this shade of green. Without exception these magazines are, no question about it, trash."

Many people however agreed with the Mayor's offical line and began to mistakenly think that all komiks-magazines contained sexual contents, and so even the clean-type komiks suffered a decline in sales. The stigma of the Bomba Komiks affected the wholesome ones, and it contributed to the decline of the komiks industry in the early 1970s.

The leading komiks writer Pablo S. Gomez stated in an interview with komiks buff Dennis Villegas that the most significant factor that led to the industry’s decline was the proliferation of the Bomba or smut komiks. Wholesome komiks titles were forbidden in many homes because of this stigma being associated with smutty materials.

When President Ferdinand Marcos declared Martial Law in 1972, Bomba Komiks were banned. Under the slogan of Bagong Lipunan, the New Society promised a moral regeneration, along with the immediate censorship and suppression of Bomba movies, dissident newspapers and radio stations. One of the main thrusts of the Marcos dictatorship was the total control of media, komiks magazines included.

Bomba Komiks surged back to life after the lifting of martial law in 1981. In the mid-1980s, after the EDSA Revolution, a few titles began to appear also clandestinely. These included Betamax Komiks, Seksi Komiks, and Sizzling Hot Komiks.

In the 1990s up to the present, many Bomba Komiks titles were still being sold in Recto and Quiapo area with such titles as L na L, Super Hot, and Xerex Xaviera, and numerous others.

As long as there are people wanting to deviate from reading ordinary komiks, and as well as men in general are fascinated by sex, the Bomba Komiks will still be around. Even if mainstream Philippine society considers it taboo. 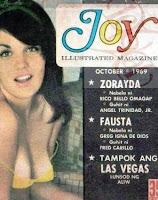