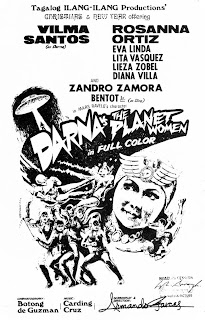 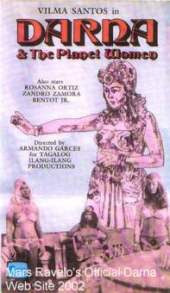 This review of Darna vs. the Planet Women benefits greatly from the fact that my wife generously agreed to watch along and translate the film's Tagalog dialogue. It must be said, however, that this arrangement was not an easy one to negotiate. I think my wife, quite understandably, would prefer to think of the Philippines' cinematic heritage as being defined by such lauded artists as Lino Brocka, and would rather live in blissful ignorance of that dark underbelly that plays home to figures like Dolphy, Chiquito and Weng Weng. 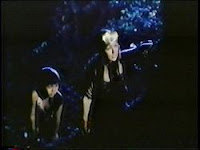 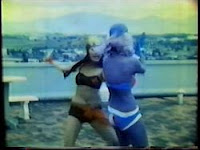 Still, she was intrigued by the fact that Darna vs. the Planet Women starred Filipino screen icon Vilma Santos. In fact, when I first talked to her about Darna, and mentioned the fact that was the star most identified with her big screen incarnation, she didn't believe me. It was almost inconceivable to her that an actress as revered and respected as the oft-awarded would have ever been low enough to don silly superhero duds for a series of cheesy comic book movies. To put it in perspective, I think it would be tantamount to someone trying to convince me that Meryl Streep had been the star of Electra Woman and Dyna Girl. 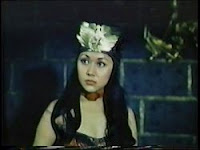 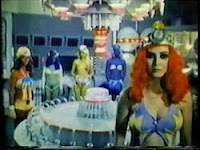 But the truth is that didn't appear in the Darna movies out of hunger, and was in fact already a star at the time of first taking the role. I think this says as much about the stature of Darna as it does about that of . Darna was, after all, an iconic figure in her own right at that point, having been the star of both a best-selling comic book and a popular series of movies for over twenty years. Given that, I imagine that the offer to play her, despite bearing with it the risk of ending up looking a bit ridiculous, was a difficult one to refuse -- just as the opportunity to play such freighted pop cultural totems as Batman or Superman has been for many Hollywood actors who might otherwise have been loath to parade before their audience stuffed like sausages into form-fitting lycra.

Darna vs. the Planet Women was the third, as well as the next to last, Darna film to star , though you might not guess that from watching it. For some reason it was decided -- despite the fact that Santos' debut as Darna, Lipad, Darna, Lipad, had been far and away the most successful Darna film ever -- that, three films later, a Batman Begins should be done on Darna, rebooting the series and, in the process, altering certain aspects of the lore that had surrounded the character in the previous films. And so, with Planet Women we get a retelling of Darna's origin that for some reason recasts her formerly able-bodied alter ego Narda as being disabled by a gimp leg. 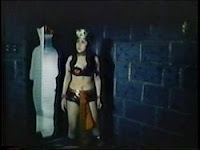 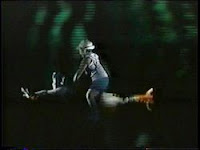 But before that retelling, we're treated to a half hour or so of light village melodrama, during which Narda bickers with her somewhat thick-witted boyfriend Ramon (Zandro Zamora) and bears up nobly to repeated taunting by a gang of liquored-up local rowdies (who you just know are due for some big time payback once Darna Time comes around). At this time we are also reintroduced to Narda's little brother, Ding -- here played by Bentot Jr. -- who acts as Narda's confidante, constant companion, and a very informal sidekick once she makes the transformation to superheroine. Ding is a chunky little wiseass in an ever-present striped shirt who will readily shake his undersized fist and mug defiantly at a bad guy as long as Darna's around for him to hide behind in the event of retaliation. In short, put this kid in some overalls, give him a monkey, and render him as a cartoon and he's a dead-ringer for Spritle from Speed Racer. Ding reaps many benefits from having a superhero for a big sis, as we see in those scenes where he gets to ride Darna like a pony as she flies through the skies above the islands.

Finally the Planet Women, a band of bikini-clad space amazons who are each color coded with a different shade of primary-hued body paint, make their appearance, interestingly choosing a small rural village in the as ground zero for their invasion of Earth. As their first act of conquest, they put the whammy on Narda's beau Ramon with a paralyzer ray -- by appearances, simply because he was unlucky enough to be wandering around in the vicinity of their flying saucer. Narda then happens upon Ramon in his frozen state and falls to her knees in lamentation, only to be answered by a surprisingly laid-back sounding voice from the heavens who reassures her and sends down to her a small stone with the name "Darna" written on it in glitter. Following the voice's instructions, she swallows the stone, shouts "Darna", and is instantly replaced by the scantily clad super amazon we've all been waiting to see -- a transformation that leaves even young Ding unable to restrain himself from exclaiming about what a hottie his sister has suddenly become.

The Planet Women, who are lead by the Ronald McDonald be-wigged Electra (Rosanna Ortiz), come armed with a shopping list of Earth scientists whom they plan to abduct, setting the stage for most of the movie's action, which involves Darna's efforts to thwart those abductions. This leads to some of Darna vs. the Planet Women's most indelible moments, including a scene where Darna bursts through the wall of one of the imperiled professors' homes, leaving a perfect, Darna-shaped hole behind her, and a rooftop kung fu fight between her and a Planet Woman that I'll just refer to as "the blue one". This is a film that goes out of its way to show that our heroine is truly a woman of her times, and so, in addition to a lengthy scene in which Darna shows her stuff on the disco floor, we're given a weirdly static kung fu match that consists almost entirely of Bruce Lee-style stance-taking and smirky goading of the opponent with come-hither hand gestures, and almost no actual fighting. 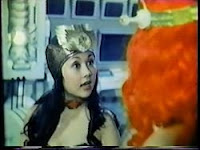 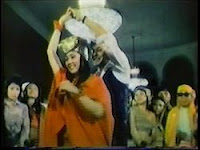 In comparison to the utilitarian and nearly mute performance of Eva Montes in Darna and the Tree Monster, the last Darna film I had the pleasure of watching, Vilma Santos gives us a Darna who is brimming with personality, boasting a charming combo of golly-gosh do-gooderism and cocky, cobra-necked bravado. By dint of this, she even seems to win over the Planet Women themselves, who turn out to be much more honorable than your average Earth-coveting space invaders. Ultimately, Electra and Darna agree to settle the whole matter woman-to-woman, and when Darna comes out of the fight on top, the Planet Women, true to their word, pack up their stuff and head back from whence they came.

With its dodgy technical execution and resolutely rural sensibility, Darna vs. the Planet Women is third world pulp cinema at its purest, with the most extreme example of conspicuous consumption seen on screen being the destruction of a chicken shack. Still, you just know that I'm going to say that I enjoyed it anyway, and I did. Vilma Santos makes for an appealingly plucky heroine, and it's not hard to see why she is such a beloved figure in her country. On top of that, the film, like the most savvy hostess, shows that it knows how to entertain on a budget, delivering up a generous amount of cheesy thrills with the simple application of colored paints on an impressive expanse of exposed flesh, some imaginative repurposing of discarded household objects in its cash-strapped sci-fi sets, and some truly head-slap worthy primitive special effects. That's enough to guaranty that I'll be taking another return trip to Darnaland in the very near future.