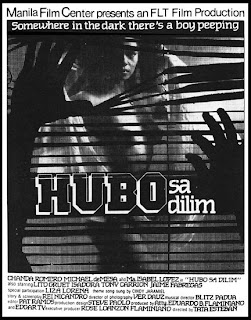 Review from the Vomit Bag catalogue:

Completely obscure 80's Phillipine erotic violence/sleaze flick, about a mentally disturbed man in a lady psychiatrist's office telling of his sexual perversions and weaknesses due to his mother being a whore when he was a child, and him accidentally walking in on her having group sex with men and with his father, etc. He meets the beautiful Chanda Romero, who reminds him of his mother and he obsesses about her while taking photos, etc. His sexual obsessions finally lead to madness and murder, when he kills one girl with a sword by sticking the blade into her vagina in a graphically bloody scene! Plenty of softcore sex, some bloody violence and very disturbing, taboo-breaking footage make this a must for fans of Asian obscurities! Uncut print, dubbed in ITALIAN w/NO subts., good qual. RECOMMENDED!!

Maria Isabel Lopez: "The worst movie I’ve done is Hubo sa Dilim with Tata Esteban… it capitalized too much on my skin…" 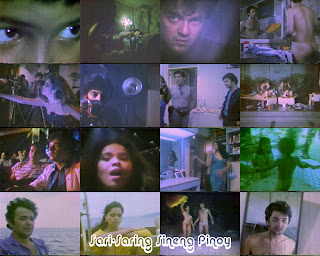 The bad bold movie, makes extensive use of recycled dressing or more appropriately, undressing in Hubo (FLT Film Productions International And Rare Breed Ltd., 1985). This much touted, so called adult movie might have initially tickled our hopes for some semblance of maturity in the way our filmmakers explore the realm of sexuality but unfortunately, it could only manage to just as quickly dash off all remaining hopes for Philippine cinema's much awaited rebirth. Hubo is bold, naked and empty, a triple disappointment for diehard optimists. An ostensibly low budget, one and a half hour incursion into the domain of psychological trauma, Hubo offers meager psychology and no thrills, a terrible fate for its makers. The director, Tata Esteban might have had the best intentions in coming up with an honest to goodness adult film, as he once did with his feature film debut 1984's Metro Manila Film Festival entry Alapaap which not withstanding its shortcomings, succeeded in many counts, particularly in exploring the horrors of a ghost consumed by revenge. Hubo is beset with many pitfalls. The material itself is old hat, though not necessarily itself a shortcoming if it had been retold with a good measure of insight, novelty or ingenuity, qualities that are sadly lacking in the finished product. Michael de Mesa plays Dinkie, a young man obsessed with Carmina (Maria Isabel Lopez), a call girl introduced by his cousin Andrew (Lito Gruet). Dinkie's absurdist temper presents the almost psychotic lengths he went through as a child growing up with his adulterous mother Christina (Chanda Romero), arguing that domestic violence breeds dementia.

Hubo, while making a bid for the viewer's attention via the bold genre, rehashes a tried and tired plot that has been used countless times before. I have no idea why a material as threadbare as this qualified to serve the filmmakers' purposes. The film miserably fails to probe into the lives of its characters, much less their motivations for their actions. Thus, in the case of Dinkie, we only get an idea of his slow descent into insanity through the scene which shows him having flashbacks of his traumatic childhood. The most overexposed yet most underdeveloped character in the film is Carmina, who after being beaten to a pulp still turns to Dinkie for sexual release. Hubo in the final analysis, merely capitalized on sex as a come on. Here it is shown in bits and pieces of nudity, simulated intercourse and coitus interuptus, and the blame goes to the director and screenwriter for having exploited such a cheap device for a psychodrama. This is nothing by way of insight, observation or exploration that this film offers nothing but the hollowness of its intentions. Hubo's semiotics borders on the inane and the vulgar. Characters are utterly uninteresting, throughly boring and therefore, not deseving of a single penny's worth of compassion. There's also no worthwhile conflict that unfolds. Come to think of it, Hubo is completely bereft of dramatic potential. The performances are not even impressive although Michael de Mesa admittedly has some good moments as in that scene which shows him brooding in bed. Maria Isabel Lopez' character is mostly a caricature, calculated to lure the male moviegoers. Her performance rests on a shaky notion, and like the rest of the movie, naked and empty.