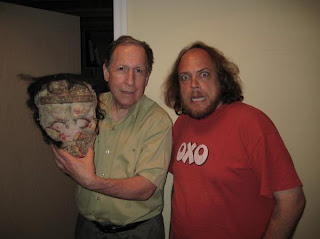 Sam Sherman and I at Sam's Independent International vault (with the face from Dracula vs Frankenstein!), New Jersey, June 2008

“Sam Sherman and The Bloody Brain Monsters of Ghastly Horror!”

Before Sherman and Al Adamson got their own company going, became associated with Hemisphere Pictures through his friendship with Hemisphere president Irwin Pizer. Pizer's partner, Kane Lynn, was a highly decorated naval officer and pilot in the Pacific theater during World War II. As a result of 's familiarity with the Phillipines, Hemisphere was able to pioneer the use of the island republic as a film location - thereby paving the way for umpteen cheapies and Francis Ford Coppola's Apocalypse Now. Prior to Sherman's association, Hemisphere had made mostly war pictures, one notable exception being 1959's Terror Is A Man, an effective leopard-man movie starring Francis Lederer. Fairly bloody for its time (it was set on ""), the Dr. Moreau-inspired thriller was promoted with a warning buzzer gimmick to alert the audience of shocking scenes.

"I kept telling them to go into horror, go into horror and stop making war pictures, and induced them to do it," recalls Sherman. "They took Terror and retitled it Blood Creature, billed it with The Walls of Hell (a Phillipines-made war movie) and got their first taste of horror; the bill did very well. As a result of that, they purchased another picture from the Phillipines called Blood Drinkers, by the same director as Terror, Gerry DeLeon, a very clever, creative director. That was teamed with a black and white film from called The Black Cat."

So, 10 years after Terror is a Man was made, it spawned what is now known as "the trilogy." John Ashley, formerly a teen star (Frankenstein's Daughter, Eye Creatures and several A.I.P. beach movies), lit up the screen in Brides of Blood (1968), Mad Doctor of Blood Island (1969) and Beast of Blood (1970), gory hits produced by Kane Lynn and directed by Eddie Romero. For over a decade to come, these same films would resurface constantly at drive-ins and on TV under myriad titles (for instance, Brides of Blood was reissued by Motion Picture Marketing as Grave Desires).

One of 's favorite tasks was creating outrageous ad campaigns and clever promotional gimmicks. For instance, the opening of Mad Doctor was a title card that led the audience in the reading of a blood oath. The patrons would then be told to swallow the packet of gelatin-based green "blood" that each had received. Though the blood was formulated to be quite safe, the very thought of consuming the viscous food was sufficient to produce a few casualties at each screening.

Eddie Romero directed yet a fourth John Ashley film, Beast of the Yellow Night, which was to have been Hemisphere's fourth in the Blood Island series, however, the Kansas City backers who had financed the previous three films had a falling out with the producers at Hemisphere, and negotiated a release through the brand-spanking-new company New World Pictures, allowing Roger Corman to enter the burgeoning field of "Blood Island Mania." 's own distribution company was finally off the ground at this time. Larry Woolner, Corman's original New World partner, then bought theatrical rights to the Klaus Kinski import Creature With The Blue Hand from Sherman (Sherman says that he had bought the film on the strength of Kinski's acting, though no-one had heard of him at the time). So it was that the Beast and Creature double-bill became the very first release. 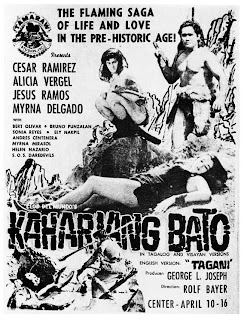 Sam Sherman, “Digging Up The Beast Of Blood”

I had a long association with Hemisphere Pictures, starting in the year of the company's inception, 1963. This involvement led from my being a consultant, doing advertising and promotion and eventually producing one of their horror films - Brain Of Blood. The principals of the company consisted of longtime distributor Irwin Pizor (President), Kane Lynn (Executive Vice President) and Eddie Romero (Vice President in charge of Production). The three were also the company's sole original stockholders.

By 1970 when Beast of Blood came along, Hemisphere had already established itself as an important horror film distributor through its earlier releases. Beast Of Blood was to reach the widest audience, through doing most business of any Hemisphere horror picture. Was the film superior to others? Perhaps not. However, the company was building to this movie and the timing was right.

Hemisphere’s so-called Blood series, was a group of individual films generally unconnected by anything except the titles. We were always trying to find some link between the pictures, to tie something new in with the previous film that had some measure of success. That was done with the titles selected, the print ads, the trailers and radio and television spots. In the case of Beast Of Blood, that was the one and only Hemisphere horror title that had any real connection to one of the previous films, as it was a genuine sequel to Mad Doctor Of Blood Island.

Why it was a sequel is an interesting story in itself . That was due to the efforts of the late Beverly "Bev" Miller. He was a former theatre owner in the exchange territory, who operated a regional distributorship known as Mercury Fihns, which represented Hemisphere in several mid-westem areas. He had done well with horror pictures and developed a good relationship with Kane Lynn. Having some previous involvement in production, he wanted to take a more active role in filmmaking.

The success of Mad Doctor Of Blood Island prompted him to write a sequel story and carve out a nice role for himself as the old Captain. In this capacity he got a free vacation to , and could engage in mock war heroics, shooting automatic weapons and downing the heavies. Being a non-actor, the role made no great demands on his dramatic skills and at the time his performance was criticized, as I recall. He may not have been a screen veteran, but he sure looked like one. I showed a still of him to some friends years ago in his Captain role and they were sure that they had seen him in many old movies, which of course wasn't true. But, Bev Miller looked right in the role and in re-screening the film recently I felt he gave the role just what was needed, apart from enjoying my seeing an old friend again.

Bev Miller's involvement spelled the end for Hemisphere's production of films in the . He brought with him three new funding groups and their differences with Hemisphere led to Eddie Romero joining with them and John Ashley and making motion pictures for other comparnes, i.e. Beast Of The Yellow Night () and Twilight People (Dimension). But for a brief moment there was Camelot. Hemisphere's Blood group existed for a short period of time and were marketed well, exceeding the results and reputation of the other films. These pictures had a quirky horror quality at the instance of Irwin Pizor and Kane Lynn, which were in their scripts, casting and marketing. The later non-Hermsphere productions gained in polish and budgets, but lacked in cult appeal, which is why horror fans are still interested m the Hemisphere films.

Mad Doctor Of Blood Island followed Hemisphere's Brides Of Blood (), with Kane Lynn taking my suggestion of dropping the last word as being an inactive one. John Ashley was hired by to go to and play the nominal hero role in this production, and he fell in love with the . Along with Bev Miller, he took an active part in the productions which lasted into the post-Hemisphere era. He cut that involvement short after having his life threatened by guerrillas with machine guns while on a location scouting trip in the jungle.

While Brides and Mad Doctor had little in common plot-wise, Beast Of Blood () did connect to Mad Doctor. After bringing “Island” back into the title, Kane Lynn once again followed my advice and dropped it for a second time, although was actually a part of the story.

Mad Doctor Of Blood Island (1969) told the story of a scientist, Dr. Bill Foster, who arrives at the Jungle-like Blood Island at the same time as heroine Angelique Pettyjohn, who is searching for her lost father. The mysterious Dr Lorca, played by Ronald Remy, star of a previous Hemisphere film The Blood Drinkers, is conducting the “green blood” experiments. Lorca, in trying to cure an old friend (Don Ramone) of a terminal illness, instead creates a horrible monster, known to the natives as 'The Evil One". At the same time, Lorca is also having an affair with Don’s wife. That sets up the forces in motion in the film. Various natives are used for experiments, get green blood contamination and the picture ends in a big fire with Don Ramone and Doctor Lorca apparently killed. A tag scene in the boat leaving the island with Ashley and Pettyjohn suggested the monster might still be alive.

This now sets up the action for Beast Of Blood. Ashley retums as Dr. Foster on a boat heading back to , with “The Evil One” secretly aboard. The monster attacks Foster and hte crew and the boat goes up in flames during the melees. Foster survives, clinging to some wreckage and the monster crawls to the shore on the island.

After the release of gore and sex loaded Mad Doctor, the ratings system came in and these elements had to be toned down in Beast Of Blood, which was more of a mystery film and jungle action picture than straight horror fare. For these reasons, the plot of Beast Of Blood unfolds slowly, as Dr. Foster and reporter Myra Russell (Celeste Yarnell) trek through the jungles to find Dr Lorca still alive quite late in the movie's running time. Lorca, disfigured in the fire which ended Mad Doctor, is played by Eddie Garcia, who has captured Don Ramone and restrained him in a most unusual way. Ramone's head is kept alive apart from his body, attached to sorne kind of chemicals and lab machines. The same for the body kept alive without a head. Several attempts of Lorca's to graft native heads on to Ramone's body fail in the surgery. However, some unstated psychic connection still exists between the body parts, over which it has some control.

Eventually Ramone's head directs the body to attack and kill Lorca, which leads to the destruction of the lab in a violent fire and explosion. At the end, when Foster, Russell and company trek off from Lorca's domain into the jungle, a native is shown carrying an unusual large wooden box which one might assume contains something that will prompt another sequel. Alas, no green blood drips out and these thoughts only remain in the mind of the viewer.

Eddie Romero directed Beast Of Blood in straight forward narrative and professional technique. The jungle and action scenes didn’t suffer from the limited budget, and set design, lab machines and such, were generally well done. Gone were the shaky zoom effects from Mad Doctor, which I liked, and many others did not. This was the artistic touch of Romero's co-director Gerry De Leon, who pioneered many techniques in Philippine production.

When the next Hemisphere movie Beast Of The Yellow Night went instead to Dimension Pictures, Al Adamson and I made Brain Of Blood for Kane Lynn in . We hired Kent Taylor, star of Brides Of Blood, shot Hemisphere-type lab gore scenes and crafted a story that matched the "Blood" series plots. With the sets and locations selected carefully and using the original background music by Tito Arevalo from Mad Doctor, we created a film that fit the series, and which many thought was a sequel to Beast Of Blood and just another Hemisphere Philippine production.