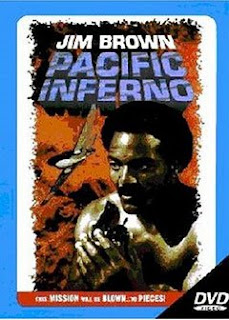 Hal Erickson's review from the All Movie Guide:

With 1985's Pacific Inferno action star Jim Brown made a triumphant return to movies. Or did he? If you read the copyright date carefully, you'll discover that this US-Philippine coproduction was actually shot in 1977. The plot has us believe that General Douglas MacArthur ordered that $16 million in silver be sent to the bottom of before the were overtaken by the Japanese in 1942. Navy divers Brown and Ric Van Nutter are among several POWs ordered to retrieve the money. Brown is all for escaping, but the duplicitous Van Nutter plans to abscond with the booty. Thus, Brown is alone in his efforts to round up local guerillas to help his fellow divers get away. Among the resistance fighters is buxom Wilma Reading, whose role consists of falling out of her blouse at the slightest provocation. Less attractive is "special guest star" Richard Jaeckel, who plays a soldier of fortune named Dealer. 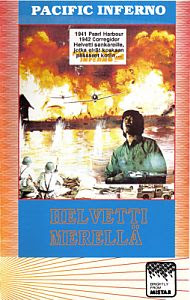 “Pacific Inferno”, starring Jim Brown and Richard Jaeckel, is not nearly as intense as “Escape from Sobibor”, making sequential viewing of the movies far more enjoyable. The story follows a team of U.S. Navy divers held captive in a Japanese POW camp in the . Their Japanese captors exploit the divers’ underwater skills to recover sunken coins from the bottom of the sea. Jim Brown soon finds himself aiding the local Filipino resistance at the expense of his own escape. “Pacific Inferno” ventures very little from this path, as it is a rather forgettable movie of mediocre quality. Most scenes take place in the sparsely designed POW camp, on a barge, or underwater. I wouldn’t normally recommend “Pacific Inferno” for stand alone viewing, but to harp on the entertainment value once again, I got my money’s worth from “Escape from Sobibor”, so everything else is gravy.

Plot: According to the opening crawl, "It is a fact of history that in 1942 General MacArthur ordered General Wainwright to dump $16,000,000 in silver pesos into to prevent their capture and use by the invading Japanese army." But the Japanese have assets at their disposal: captured Navy diver Jim Brown and his crewmates. In halting, exclamatory English, the prison-camp commander warns, "Please be informed… we are all aware… of your skill… in underwater work!" At first, Brown plays along, because the Japanese treat him better than any American ever did. But later, he later changes his mind and hatches a plan to help the Philippine resistance, prompting a showdown. "It is not… my desire… to kill you," the commander shouts. "We must talk… and come to… human understanding!"

Key scenes: When the resistance leads Brown and company to a burned-out building, Brown flashes back to race riots at home. Meanwhile, one of his crewmates spots a pretty flower in the wreckage, and remembers a good-time boogie-woogie dance.

Can easily be distinguished by: The sludgy pace and quiet, murky action sequences. There's a lot of standing around, even when the situation is reportedly urgent.

Sign that it was made in 1979: There's a montage of World War II stock footage set to Edwin Starr's "War," and silky soul music plays under the scene where Brown cozies up to a native and coos, "You're a whole lot of woman. I'm just trying to put it into words."

Memorable quotes: When Brown's naval commander objects to bunking with a black man, Brown hisses, "This ain't no ship! And it surely ain't no of no goddamn !" When the commander replies, "As far as I'm concerned, this is still the Navy and nothing has changed," Brown sighs, "You got that right."