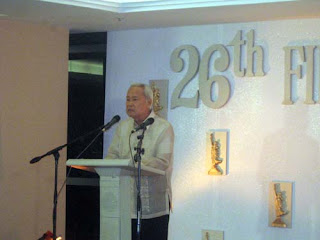 “I was shocked when I heard the news,” actress-turned-Batangas Gov. Vilma Santos told Inquirer Entertainment. “I really feel sad. I will pray for the repose of his soul and visit him one last time.”

“He was like a second father to me,” said . “He supported my love team with Edgar Mortiz when I was a teenager. He trusted in me as an actress, but, more than that, he stood by me through my lowest moments … when I had financial problems.”

“He will be sorely missed. He served the industry for five decades,” said actor Leo Martinez. “He was a strong pillar in the movies.”

They worked together in the of the where was director-general and Laxa was chairman of the board.

At the time of his death, Laxa was a board member of the Film Development Council of the Philippines (FDCP).

“A pillar of the film industry, he tirelessly championed the cause of film producers and movie workers, campaigning for their rights during his time on the FDCP board,” Rolando Atienza, head of FDCP, said in a statement.

Atienza said Laxa helped the FDCP in developing plans to assist the industry, and his experience and dedication to the local film industry were unparalleled.

“He was a wise old man. We will miss his wise counsel,” he said.

He was never late in his appointments. I have no idea how he did it. He never used a cell phone.”

“He was a gentleman of the first order,” said Boots Anson-Roa, head of the Movie Workers Welfare Foundation. “His integrity was beyond reproach. He fathered the original indie scene.”

Filmmaker Elwood Perez said that Laxa, a lawyer by profession, ended the supremacy of the studio system (composed of the so-called Big Four: LVN, Sampaguita, Lebran and Premiere) when he put up Tagalog Ilang-Ilang Productions in the 1960s.

“He was a mild-mannered maverick who helped pave the way for other fledgling producers to become major industry players,” Perez said of Laxa.

“I was at the crossroads of my career when Atty. Laxa offered me the chance to work in his new company. I am forever indebted to him. He was a kind and courteous man. A giant in the industry,” said Fuentes.

In the 1970s, he also produced the biggest hits of Vilma Santos, including “Kampanerang Kuba,” “Darna and the Giants” and “Darna vs the Planet Women.”

His remains lie in state at the in . Industry leaders are organizing necrological rites on Sept. 18 after the 7 p.m. Mass. Interment will be on Sept. 19 after the 9 a.m. Mass.

Laxa was the older brother of actor Tony Ferrer who gained fame as Tony Falcon, the local version of James Bond, in the 1970s.