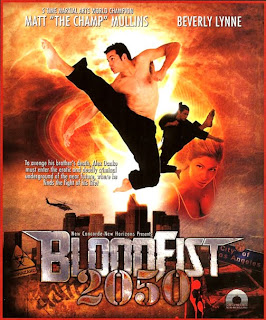 Bloodfist 2050 is a story about vengeance. Set in in the year 2050, it is a story about Laker Powers (Matt Mullins) vying for the revenge of the death of his younger brother. He does so by participating in a no-rules fighting circuit where he believes he'll get clues which will lead him to the murderer.

Former Tae Kwon Do Olympian Monsour plays the contra bida, The Great Ahmed Kahn, another fighter whom Laker suspects is the one responsible for the murder.

Directed by Cirio H. Santiago and line produced by Premiere Entertainment, the entire movie was filmed in the to achieve the setting of after a nuclear bomb attack. Main producers of the film are Concord Films, and Roger Corman.

Matt Mullins (www.matthewmullins.com) started martial arts training when he was 10 years old. He grew up in , but is currently living in to pursue his acting career. His previous works include a Discovery Channel special on Extreme Martial Arts.

This is the third collaboration between Monsour and C. H. Santiago. The first two films were Bloodfist 2 and When Eagles Strike. This is also the first time that Monsour is playing the role of an antagonist. He says that some of the benefits that come with playing the role of the “contra bida” are that you can “get away with a lot of things” and you can “do anything you want”.

With this role, there are no limitations when acting and fighting in front of the camera. In the past, when Monsour's roles were those of the hero, he was more limited in his actions.

Other local cast members in Bloodfist 2050 include Bon Vibar, a radio announcer on PIA, Channel 4, who plays the role of an accountant and Director Joe Marie Avellana who plays the part of the announcer during the fights.

Filled with suspense, romance, and lots of action, this movie is sure to have you on the edge of your seats!

Bloodfist 2050 reminds me of the low budget action movies Jean-Claude Van Damme used to make in the late 1980s before he moved to and became a total loser. In case of any confusion, I mean that as a compliment. Just like those films, Bloodfist 2050 makes no pretence about its meagre plot or wooden acting, choosing instead to focus its resources on squeezing as much action into the film as possible. The result is one of the most honest and enjoyable straight-to-video (actually, straight-to-TV) action films that I have seen in a while.

The plot is really beside the point but to summarise: Alex visits his brother Johnny, a pit fighter, only to find out that he has been murdered. Alex decides to pursue the murderer with the help of Slick, a police detective. Slick suggests that a pit fighter may be responsible, so naturally he trains Alex to become a fighting machine and enter an upcoming tournament. The same plot has served hundreds of action films over the years, and with good reason - It's the perfect vehicle for almost non-stop violence. The only real twist here is the fact that the movie is set in the future, hence the "2050".

Bloodfist 2050 really doesn't disappoint when it comes to action. From the car chase that begins the movie, to confrontations with street thugs and pit fighters, the action flows constantly. The fights are mostly brutal and the acrobatic skill of the various participants is put to good use. The violence is really only broken up by stripping routines and a sex scene. In fact, the film is surprisingly sleazy. I was not surprised to learn that some of the cast earn their livings making soft core adult movies.

The performances are uniformly bad but they serve their purpose. Matt Mullins makes a decent action hero. He may have the charisma of rotting vegetables but he looks the part and is obviously a skilled martial artist. As the stripper love-interest, Beverly Lynne exposes her breasts competently enough. Joe Sabatino also does reasonably well as Slick, particularly in the film's latter stages.

If you like mindless violence interspersed with gratuitous nudity, then Bloodfist 2050 comes highly recommended.

Roger Corman. Cirio H. Santiago. Kickboxers. Post-apocalyptic setting. Revenge plot. Tons of violence and nudity. It feels like 1984 all over again. New Concorde's BLOODFIST 2050, released in 2005, nearly a decade since the previous BLOODFIST, is the first of the nine-picture series to not star Don "The Dragon" .

This time, "five-time world martial arts champion" Matt Mullins steps in to star in a loose remake of the original BLOODFIST. Alex Danko (Mullins) arrives in seedy, futuristic , where his brother was jumped and beaten to death in an alley outside a strip joint. You pretty much know the rest--young kickboxer investigates murder of kickboxing champion brother, goes undercover, usual training sequences, has sex with hot stripper, lots of random fight scenes in and out of the ring. The credits play over a futuristic car chase out of one of director 's '80s ROAD WARRIOR knockoffs, then that's the last we ever see of that part of 2050 society.

Once the credits end and Danko gets to , society seems pretty normal, except there is an inordinately large Filipino population (BLOODFIST 2050 was shot in the ). There is also a surprising amount of nudity in this movie, completely gratuitous, much of it provided by Beverly Lynne as Mullins' blond love interest. A lot of stock footage appears from previous Corman films; I think a pre-silicone Maria Ford appears as a stripper. Lynne and the guy who plays Danko's comic-relief fighter sidekick (Glen Meadows) are married softcore porn stars in real life. And it's good to see Joe Mari Avellana, who acted in the first two BLOODFIST movies (as different characters) still appearing in and wearing several hats in these cheapjack Corman productions (he also designed the crummy sets).