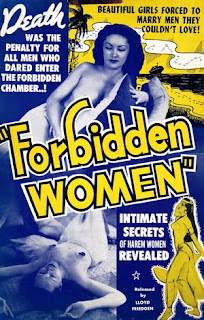 From John Santos’ article “The Lost and Found Box: Rediscovering a Cinematic Tradition” from his Sinehan Sa Kanto blog:

The other extreme of Philippine cinema could be of help as well. On the one hand there’s the political consciousness of the films of the 60s through the 80s. On the other there’s the exploitation films not only of the 70s and the 80s where Cleopatra Wong and Weng Weng reigned, or the 60s where Gerardo de Leon and Eddie Romero slummed it with Roger Corman’s exploitation film outfits, but also the “Golden Age of Exploitation,” the 30s and the 40s when films from other countries, especially the “Orient,” were brought to American shores, cut, re-cut, scenes added, even multiple movies merged, and shown in seedy theatres as shocking views of an alien world. 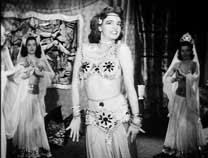 One particular character is Lloyd Friedgen. As an enterprising producer, he traveled to Asia’s more active filmmaking industries—that is, the studios of the and —to take films that could possibly attract an audience in the . Two films he “discovered” that are now known amongst cult film enthusiasts are Forbidden Women (1948) by Eduardo Castro, the mind behind Zamboanga (1937; the print was discovered of all places in Finland) and Outrages of the Orient (1948) by Carlos Vander Tolosa, the man who made Bilanggong Birhen (1960) and Giliw Ko (1939). Of course, these movies were manhandled by Friedgen, cutting dialogue and action continuity and flow, reinserting scenes from other movies or scenes newly filmed by Friedgen to “spice-up” the story. If anything, if not re-done and re-transformed to at least remove scenes that are known to be Friedgen’s and not Castro’s/Tolosa’s, these movies are great windows to what would otherwise remain lost, hidden, and forgotten. Tracking Friedgen’s history, his dealings with other producers like him (especially another producer, Ray Friedgen, although I’m thinking they are the same person or possibly he is Lloyd’s father), and possibly any existing archive of his movies could uncover an interesting goldmine of unseen—but unfortunately molested—Filipino films. 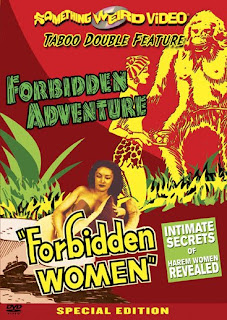 FORBIDDEN WOMEN is a Filipino production imported to the and sold as an exploitation film. Strangely, it was also shot in English, not Tagalog, the Filipino language. Following an education abroad, young Prince Sigore returns to his South Pacific island kingdom to take over the throne. However, he finds that his black widow sister-in-law, an evil schemestress, intends to take the kingdom for herself!

Thankfully FORBIDDEN WOMEN is only 62 minutes, as it’s a very talky attempt at creating a epic on a Filipino budget. The lavish sets and costumes, cultural dances, and political script are impressive, but it’s surprising to think that anyone in the would have purchased this film for distribution! But distributor Lloyd Friedgen shot new sequences of topless women (the FORBIDDEN ones of the title, I assume) to spice up the film and ensure it would sell as a roadshow attraction; the brief torture chamber sequence probably helped, too. In other words, skip this one and watch FORBIDDEN ADVENTURE again.

Something Weird Video deserves a medal of some kind for rescuing from oblivion dozens, if not hundreds of fringe market movies that they quite rightly regard as historically significant examples of the type of PT Barnum-type showmanship worth preserving. The two features in this "Taboo Double Feature," Forbidden Adventure (1935) and Forbidden Women (1949), are esthetically awful but quite fascinating in other ways not intended. Both are in surprisingly good shape (though the extensive stock footage in the former is often pretty terrible) and, par for the course, Something Weird has supplemented this package with another hour or so of extra features, including an entirely different cut of Forbidden Adventure that was released in .

…The 62-minute Forbidden Women is another curio. Apparently this is a Filipino production, possibly with American input and, at the very least, features scenes of obviously American strippers crudely inserted into the narrative. Though set on an "unknown island in the South Pacific," Forbidden Women's familiar tale of palace intrigue is set in a mythical kingdom more Siamese than Polynesian (and its citizens are explicitly Islamic). Prepubescent Prince Sigore (Bimbo Danao? the cast goes unidentified), a Filipino cross between Sabu and Bobby Blake, returns to his kingdom as heir to the throne. His arrival is heralded in the film's big musical number, curiously similar to the Danny Kaye number "(You'll Never) Outfox the Fox" from The Court Jester (1956). However, the Sultan's evil cousin and sister-in-law conspire to take power by poisoning the ruler and discrediting Prince Sigore. It's a frame-up as the Prince is caught red-handed in the Ladies-Only Temple of the Golden Chamber, home to the Forbidden Women.

Where did Forbidden Women come from? Was it a wholly Filipino production with American inserts or primarily an American production shot in the ? Is its story typical of the kinds of films popular in the in 1948, or tailor-made for a perceived foreign market? Whatever the answer, the film was shot entirely in English, though one assumes that many in the cast were primarily Tagalog speakers, as the performances are uniformly terrible. The sets are elaborate but cheaply-made and the action crudely realized. But some in the cast, especially the actors playing Prince Sigore, his attendant (a Filipino Smiley Burnette, complete with blank, wall-eyed stares), and the Sultan are likable.

At least Forbidden Women doesn't deny its jerry-rigged joys. When producer Lloyd Friedgen traveled to a post-World War II Philippines looking for films to release, he struck Polynesian paydirt with this tropical island melodrama. Beginning with a sufficiently strange musical number (that's right, our proto-political potboiler is also a saccharine songfest) about life as a "merry hunter" and ending with a free-for-all battle that's more action-packed than a post-millennial summer blockbuster, all Friedgen had to do was import some erotic eye candy and he believed he had a horny hit on his hands. Yet instead of hiring exotic-looking dancers who could cinematically mingle with the rest of the decidedly ethnic cast, our flawed filmmaker hired girls from some skid-row burlesque house and forced them to flop around in their decidedly Caucasian accoutrements. The result is immediately obvious. One moment, we are watching a wise old Asian woman speak in a clipped Confucius-like manner concerning laws and tradition. The next, a barmaid from is shaking her fans and exposing her cellulite. The fact that all of this is happening in front of a whisper-thin pre-teen prince who is visiting the Golden Chamber (read: Bali brothel) as part of his "continuing education in preparation for becoming Sultan" says more for the original film's perverted premise than Friedgen's post-production pandering.

Indeed, a lot of Forbidden Women plays like an overripe cautionary tale about the ability of power to corrupt and the inability of island people to settle their differences without poisonings and armed fisticuffs. The rather sedate Sultan may be one heck of a leader, but his son with big ideas wants to cause all kinds of trouble (he's been off being schooled by the colonialist white men, don't you know). He believes in concepts like equality, freedom, humanity, and justice. Naturally this puts him at odds with relatives that would rather kill than share with the impoverished. The complicated coup d'etat, which requires slowly filling the leader with homemade toxins while feeding his snot-nosed offspring to the sharks (!!!), begins without a hitch, but our adolescent agitator throws a big fat monarchal monkey wrench into things when one of his assassins turns spineless. He can't kill a kid, no matter how much wealth, security, and political power it means for him. No, the assassin vows loyalty to the future sovereign, takes him to his uncharted home island, and even hooks him up with his own prepubescent daughter. After favoring us with a powerful love ballad about the "magical moonlight," his tiny highness prepares to kick some backstabber butt. Yet while his armies are fighting, all he does is "haunt" his evil aunt (she thinks he's dead, remember?) and warns his pop against any more toxic treats. Having long since forgotten its strip-show sequences, Forbidden Women ends just as oddly as it began.