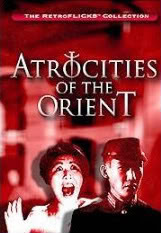 [Original production date estimated at 1948-49, also known as “Outrages Of The Orient”, “Atrocities Of Manila”, “Beast Of The East”, and in as “I Kitrini Maska”]

Clumsily spliced together from at least three different productions, Atrocities Of The Orient is one of those fascinating specimens of exploitation cinema that is entertaining simply because it is so bad!

The opening scenes are reminiscent of a South Pacific musical - happy villagers singing and going about their daily chores in a tropical setting. The action then abruptly shifts to mayhem as the Japanese army attacks the village, murdering, raping and pillaging. Then, just as abruptly, we are plunged into a slow-moving melodrama regarding two enlisted brothers and their struggles during wartime. Thereafter comes POW brutality, miscellaneous love stories, titillating tidbits and attempts at humor, all chopped together without a care for consistency of narrative.

Purportedly a dramatization of the Japanese invasion of the during World War II, Atrocities Of The Orient becomes something quite different: a surreal pastiche of horror, action, ham-fisted melodrama, stock footage, and even lame attempts at comedy, book-ended by sober narration that is apropos of nothing. Don't miss it! 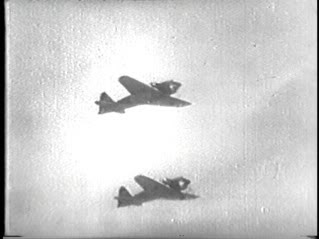 After a narrated intro and a musical number by happy Filipino villagers (similar to Indian movie segments) the main story is about the Japanese occupation (some actual news footage is used), two rival brothers and some captured freedom fighters. The Japanese Col. (“There is only one God, the Emperor Of Japan!”) orders (mostly offscreen) bayonet deaths and decapitations. Eve, a tough lady guerrilla leader shoots one of her own men for punishment. There’s even a comedy relief Sgt. character. In (second language) English but whole conversations are in Japanese. The topless women running and some other sequences were awkwardly edited in for the exploitation release. The David Friedman Roadshow Rarity release is from a 59 re-issue. It still played theatres in the 70s! 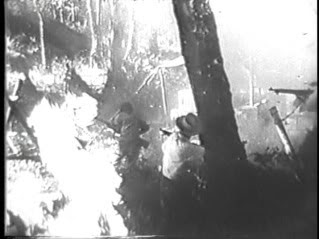 The native residents sing while they pound some type of seed. The narrator then speaks of Corregidor, the Gibraltar of the , the old fortress blasted to a heap of ruble. Then the narrator shows a military cemetery: "Here lay our dead: Philippine and American, buried together."

Planes roll over the skies and start bombing the cities. There is a great deal of fire in the city. And there are firefights breaking out between the invading Japanese and the Philippine and American resistance. A Japanese soldier invades a house and when the old man there tries to protect the women of the house the soldier bayonets him. Captain Antonio Cruz knocks out the Japanese soldier. He then goes in to a bedroom to speak with his wife. More Japanese come into the house and threaten the women. Captain Antonio hears the women screaming. He shoots his wife dead. He opens the door and the Japanese start to pour in. He has no more bullets so he has to jump out the bedroom window to survive. Some of the women run out of the house, one naked from the waist up. A Japanese soldier pursues her, but she either jumps or falls of the cliff to her death.

Filipino Colonel Cruz is in critical condition at the underground hospital. Before dying he writes a note to his son. It says: "Lt. Carlos Cruz: Fight to the last. Tell mother everything is all right. Father." He dies. Lt. Carlos Cruz receives the letter. Then he hears his mother calling him. They hug each other. She comments on how ruthless the Japanese are. Mom then tells Carlos that he dropped a letter. Carlos picks it up, but he won't tell her what it really says. Mom asks him if he has seen his brother Antonio. Carlos tells her not to mention his brother's name. "As far as I'm concerned, he's dead. He stole the woman I love." Carlos has someone take his mother and the others to a place of relative safety.

Carlos Cruz brings in some natives and a dead woman. But the bombing gets so close to them that they all have to leave the area. Carlos goes to a field hospital and sees a woman he really likes, Nurse Carmen. Carmen likes him too, but she won't get serious with him because he still is hung up over his brother's wife. As they talk, his brother Antonio brings in the dead body of his wife. Carlos can't believe his ears when Antonio admits that he killed his wife: better that, he says, than leaving her to suffer at the hands of the Japanese. Carlos and Antonio start to fight each other, but they are broken up. Mom wants them to reconcile but that seems impossible. Antonio leaves.

Captain Cruz receives a message from headquarters to surrender to the nearest Japanese outpost. Cruz tells his men: "We'll never surrender." A wounded soldier comes back to the Philippine defense line in the area and tells the captain that there is a Japanese machine gun nest about a mile up the road. The captain asks for three volunteers and he gets them. The three attack the nest. The first soldier throws a hand grenade which hits its mark, but not before he is shot and killed. The hand grenade explodes and kills many of the Japanese soldiers. The second Philippine soldier goes to check on the nest. He is shot and dies, but he does manage to shoot and kill the Japanese soldier that shot him. The last Philippine soldier now goes to check on things. A Japanese survivor throws a knife into his back. The Philippine soldier is able to kill his killer. 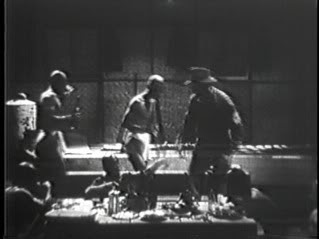 One of the Filipinos is taken out of line and beheaded by the second in command. A crazy Filipino sneaks up behind the Colonel and steals a pistol. When the crazed man kills a Japanese soldier, the Japanese Colonel kills him. A chaplain steps out of line to say some words over the crazy fellow. For this, he is tied to a tree and then the second in command bayonets him to death. The Japanese killer then cackles over his feat.

The Colonel talks with Carlos. He tells him that the Japanese came to liberate them from the Americans. He adds that Bataan has fallen and soon will surrender. If the lieutenant cooperates, he and his men will not be killed. Some of the Japanese enlisted men start to chase the Philippine nurses. For this offense, the second in command punishes the sergeant involved by hitting him and knocking him down several times. Lt. Carlos thanks the Colonel for having the sergeant punished, but also tells the Colonel to leave nurse Carmen alone because she is his fiancé.

At a Japanese check point, when a Filipino tries to prevent the Japanese from taking his rice that he needs to feed his children, the Japanese guard bayoneted him for his protest.

Captain Antonio hears some noise down by the river. He readies his men for an attack. But they find out that the noise is made by a lovely Philippine woman swimming in the river. The men cat call and whistle at her. She does not care for this at all. She thinks they are Japanese. She is actually a Colonel in rank and has 11 men with her. She goes to the attack against the invaders, only to find out that they are also Philippine. She is still mad because of the cat calls. Her name is Colonel Eve. She slaps Captain Antonio for gawking at her. She then suggests that they combine the two commands under her leadership. Antonio accepts.

The misbehaving Japanese sergeant has still not learned his lesson. He leads the exercises for the nurses and male medical staff. Then he starts flirting with the nurses. To make things worse, he tells them all to give him their watches. As he is bragging to them about his prowess in the army, the second in command comes up to him. The sergeant immediately starts giving the women back their watches. The second in command threatens to stab the sergeant with his sword, but the nurses scream so much at the idea that he relents. 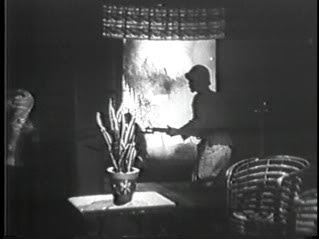 Under the command of Colonel Eve, the group attacks a village housing Japanese soldiers. It is a successful raid, but they lose three men. She asks who was the man in charge of the now dead men. She then shoots and kills the man in charge. She figures that she should eliminate him now and avoid the loss of three more men the next day.

The Japanese Colonel asks Lt. Carlos who were the forces making the attacks on Japanese posts. Carlos says its Philippine guerrillas. When the Colonel starts getting read to take some offensive action, Carlos knocks out the Colonel. A Filipino soldier grabs some Japanese documents. He rushes out, but the alarm is sounded. The Filipino is shot, but he succeeds in handing off the documents to another Filipino. The Japanese then capture the wounded man and torture him. The captured man and others like him are saved from the Japanese, by an attack on the P.O.W. facilities. They get their men out of there.

Eve personally leads the next charge. She is a little upset about not finding true love in her life and decides to be a bit reckless. She gets shot for her recklessness. Antonio tries to comfort her. He tells her he loves her. Eve asks: "Why didn't you say so in the first place? This could have all been avoided." She then asks Antonio for a kiss good-bye. They kiss. She dies.

The narrator says: "Yes, many died so we may live." 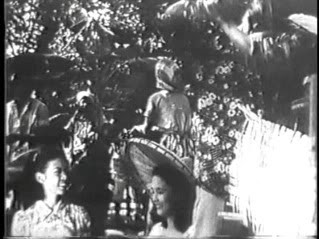 Not that great of a movie. The quality of the film on the DVD was poor. There were scenes so dark you couldn't see anything. The acting was o.k., but nothing special. And the title of the movie is a bit misleading. There are definitely atrocities in the movie, but it did not live up to they hype I read in some of the reviews. Especially the Japanese crimes against women, were not covered that much. It's more of a Philippine guerrilla fighting movie than anything else, along with scenes of Japanese excesses. In one sense, the Japanese get off lightly because they do have two scenes with the sergeant being punished for his trying to mess with the women. I did like the title of the movie. My version was "Atrocities in the Orient". And atrocities is a good name for the behavior of the Japanese in and the South Pacific.