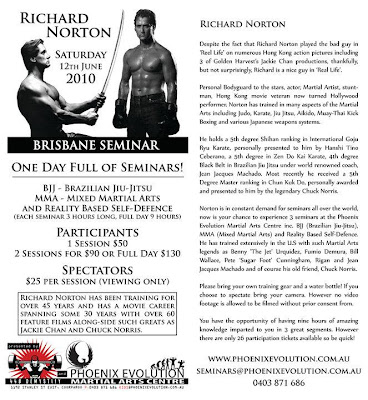 One Day Full of Seminars!

and Reality Based Self-Defence

$25 per session (viewing only)

Richard Norton has been training for over 45 years and has a movie career spanning some 30 years with over 60 feature films along-side such greats as Jackie Chan and Chuck Norris.

Despite the fact that Richard Norton played the bad guy in ‘Reel Life’ on numerous Hong Kong action pictures including 3 of Golden Harvest’s Jackie Chan productions, thankfully, but not surprisingly, Richard is a nice guy in ‘Real Life’.

He holds a 5th degree Shihan ranking in International Goju Ryu Karate, personally presented to him by Hanshi Tino Ceberano, a 5th degree in Zen Do Kai Karate, 4th degree Black Belt in Brazilian Jiu Jitsu under world renowned coach, Jean Jacques Machado. Most recently he received a 5th Degree Master ranking in Chun Kuk Do, personally awarded and presented to him by the legendary Chuck Norris.

Norton is in constant demand for seminars all over the world, now is your chance to experience 3 seminars at the Phoenix Evolution Martial Arts Centre inc. BJJ (Brazilian Jiu-Jitsu), MMA (Mixed Martial Arts) and Reality Based Self-Defence. He has trained extensively in the U.S with such Martial Arts legends as Benny ’The Jet’ Urquidez, Fumio Demura, Bill Wallace, Pete ‘Sugar Foot’ Cunningham, Rigan and Jean Jacques Machado and of course his old friend, Chuck Norris.

Please bring your own training gear and a water bottle! If you choose to spectate bring your camera. However no video footage is allowed to be filmed without prior consent from.

You have the opportunity of having nine hours of amazing knowledge imparted to you in 3 great segments.

However there are limited participation tickets available so be quick!

Register your Expression of Interest HERE