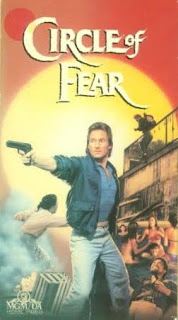 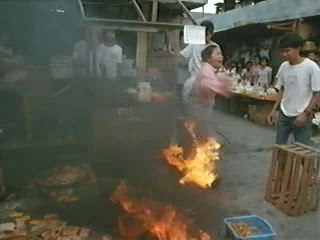 This is a cheesy, low-grade bit of actionsploitation directed by Corman-trained film editor Clark Henderson (who also directed Warlords of Hell and Saigon Commandos).

Summary from the box:

"Tom Price, an ex-mob enforcer, journeys to to investigate the mysterious murder of his brother. Once there, he finds himself trapped in the pity of the city known as the "Cesspool of the World" - and outnumbered by the underworld's deadliest thugs. The odds may be against him. But that's just the way he likes it! 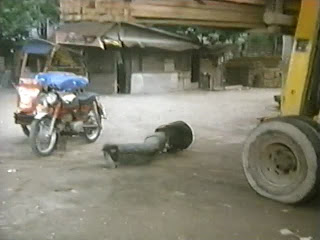 In this daring gangster thriller packaged with shootouts, wild car chases, sexual liaisons and bone-shattering brawls, one man's extraordinary fighting skills sustain him in battles that the average cop couldn't survive. Employing every trick of his former trade, he pulls the plug on an illegal gun-smuggling operation, a depraved sex slave market and the most ruthless and cunning villain he has ever encountered.

With its non-stop action and mind-bending plot twists, Circle of Fear is due to please diehard fans of the action/thriller genre." 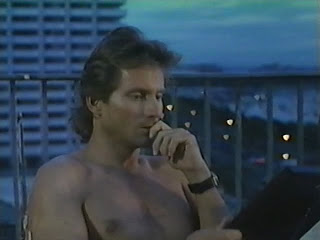 Yeah, the actual movie isn't as exciting as the box copy. Yes, it qualifies as actionsploitation, but Tom Price is no Jason Blade, and this is no Day of the Panther. But the cliches are there, along with some bad dubbing, quite a bit of sleaze and trash, and some strange parts comparable to the man in a chicken suit from Panther. 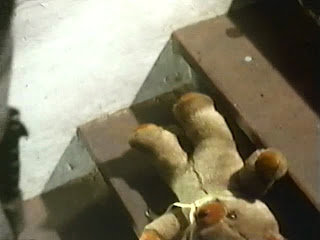 The movie starts at the siege of Phnom Penh in 1975, thereby satisfying the actionsploitation cliches of the protagonist being a former special-forces agent in Vietnam/Southeast Asia, and starting the film with a prologue/flashback set in Vietnam/SE Asia (it's the siege of Phnom Penh in Cambodia, I guess that's close enough to the fall of Saigon), and having it be a nightmare of the hero in the present day. And there's even a scene of a little girl dropping her teddy bear, complete with lingering focus on Teddy. I feel a bit cheated that we also didn't get a baby carriage rolling backwards down some steps... :-)

Patrick Dollaghan as Tom Price is certainly not the best actionsploitation hero, but he does have his moments, like when he reveals his presence to a gang of goons in a cliched warehouse scene by dropping a hand grenade right into the middle of their equally cliched card gambling scene. That's kinda cool, I guess. 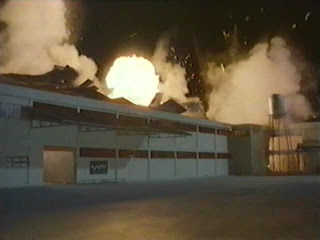 And there is some odd stuff in this film, too. The chase scenes use cliched 80s music, but sometimes the song they use is inappropriately upbeat for an actionsploitation film. During the first car chase, I think I forgot whether I was watching Circle of Fear or a Better Off Dead-type 80s teen comedy. I wouldn't have been surprised if Curtis Armstrong had suddenly shown up out of nowhere. 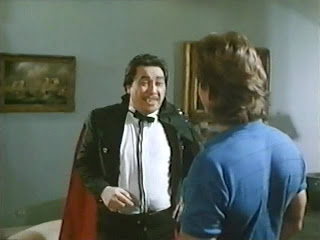 Also, we get a bit in a market where a vendor's cooker gets knocked over, the gas catches fire and it sets her apron and pant leg ablaze, causing her to run around like a chicken with its head cut off. Oh, and, there's a part where the hero meets this guy to hit him up for info or something, and for some inexplicable reason the character is dressed up as Dracula, complete with fake fangs. Why? No freakin' idea.

It's also pretty trashy and sleazy at times - it certainly fulfils the "sploitation" in "actionsploitation." We get a cockfight scene - and it looks to me to be an actual cockfight, ending with the losing bird impaled through the head by the winner's cockspur (I guess animals WERE harmed during the making of this film). We also get a trashy pool party with topless women, and an equally sleazy nightclub with topless dancers. These scenes didn't turn me on at all - they made me feel dirty. 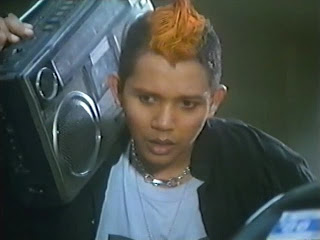 But even more tasteless is a scene where the hero's obviously underage daughter (I'm not sure if the actress was, but I wouldn't be surprised) is forcibly shot up with heroin or some other intravenous drug by a stereotypically 80s-looking teen punk who seems to have taken fashion and hairstyle advice from Jon Cryer in Superman IV (Narm moment when he exclaims "Blast off!"), and some other guys carry her limp (and topless) body to a poolhouse, where they hold her arms and legs down on the bed while another guy rapes her. (The film at least has the decency not to show the rape, just her screaming while it cuts away.) Oh, did I mention that it's being videotaped? Yeah, it is, and we get to see it again when our hero finds and watches the tape. Geesh, I think I need a chemical shower now... 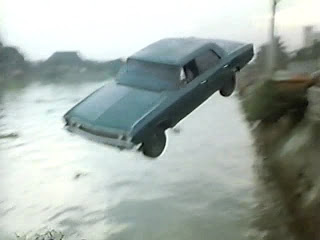