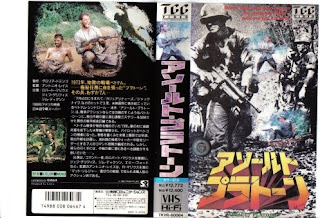 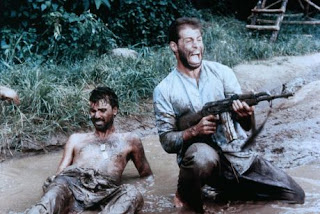 War torn Vietnam 1973 sees a village of innocent men, women and children subjected to a horrific attack from above. The American air force lay siege upon the jungle beneath them with an unmitigated barbarity that shoots down a deadly nerve gas. The toxic agent is a flesh eating concoction that literally feeds itself upon the naked skin of those it comes in contact with. This is as brutal a pre credit opening you are likely to experience. Scenes of scurrying people of all ages are hit with an acid rain that suppurates their flesh, peeling it away to the tendons and bone. Handfuls of hair are pulled out to the bloody root in exasperation of the terrible pain. In camp tethered animals lay twitching in their death throws as globules of blood trickle from nose and eyes in all too realistic fashion. The combined mass of a tortured populace, staggering around like rotting corpses barely still alive, is a scene straight out of an Italian Zombie flick! 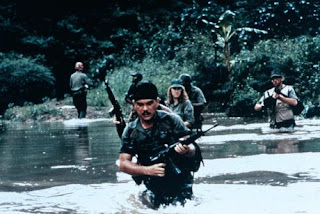 Two U.S Air Force pilots are taken prisoner by Vietnamese soldiers and duly taken to an uncharted jungle prison camp. There they are immediately interrogated about the earlier events of crimes against humanity. Major Adams and Major Webb are soon subjected to torture. Both men are strung up and subjected to electric shock treatment to the genital region. A forced variation on Russian roulette is played out with a pistols barrel shoved into the mouth of one of the officers, who writhes in sheer terror. Their commanding interrogator is no more perturbed by the use of barbaric violence than his counterparts and is determined to get a confession from the American’s.

A war seasoned rescue team is put together outside of normal military procedure. Six men and a woman form up what is best described as the dirty half dozen plus one. Their objective is to storm the concentration camp and bring back Adams and Web. Their bounty a princely sum of one and a half million dollars. A marauding seven that although not exactly magnificent certainly know how to take care of business. A killer corps of trained mercenary tacticians who’s survival instinct is to kill or be killed. There’s definitely no Hollywood happy ending on the horizon here. It’s a raid and rescue mission where everyone but the objective is the enemy!

There is enough gunfire and explosive Action to keep fans of the true grit lovers entertained, but the insidious message that plays throughout is a political play that paints a tainted picture of the entire war from the American standpoint. The level of ruthlessness and the blatant disregard for human life in favour of political might is clear for all to see. A clumsy attempt at telling the world how insane the Vietnam War was from all involved. A bleak portrayal of man no matter what his creed or colour.

The team storms the encampment and free both Adams and Webb to the enragement of the Vietnamese prison commander, who without prejudice unloads an automatic rifle into the combined bound remainder of the detainees. A break from his ritualistic raping of the local young girls in an alternate expression of his pent up aggressive nature. Bodies fly as bullets and explosions follow each other in rapid succession. The prison enclosure turns into a mini war zone as bodies are strewn all around and huts ablaze from the sheer firepower being distributed. 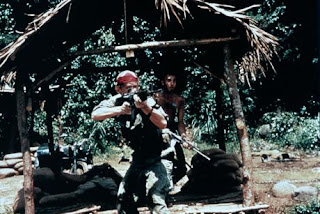 The surviving assault team members and the two prisoners escape into the surrounding jungle but the remaining Vietnamese soldiers are soon in pursuit.

As ever you have to question the motif behind a mission that ends in more deaths per head than that of those rescued! Here the definition of ‘for the greater good’ is answered come the final scene of the movie as what has preceded turns out to have far deeper ramifications , but for the delight of the steadfast viewer payback indeed proves to be a bitch!

The movie has a look and feel akin to that of a jungle action flick made around ten years earlier. A throwback to the heyday of the mid Eighties conveyor belt of hard hitting, blood spitting and explosive action fodder that an audience could kick back with. This is definitely throwaway Action but not without its merits. The powerful opening is something pretty unique to the genre, the ubiquitous firepower is always welcome, but it is the complete lack of any righteous hero that leaves the overall experience cold. Even an anti hero would have made the movie more palatable but here what is served up is a devilled dish of cold hearted villainy from all quarters. Bland characters in a bleak situation that leaves its audience with absolutely no one to root for in a truly nihilistic outing. A pretty rare viewing experience that dares to be different, and must be lauded for that, but in so being instantly alienates the majority of the demo graph it is aimed at! What will stay with the patient viewer is the detached coldness of the players and the opening sequence, that although vile in its conception is an incredulous one to experience.