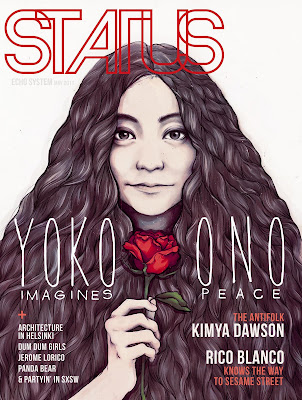 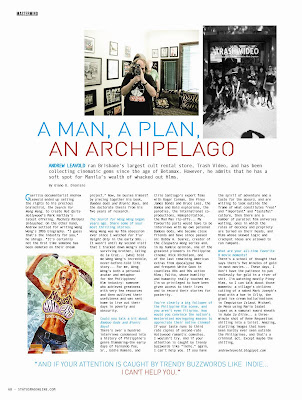 1. Hey Andrew! What's up? How were your holidays?

2. How was MMFF? Anything stood out for you?

Trapped in Brisbane for now I sadly missed MMFF. I’m so glad Dolphy scooped both Best Actor and Best Supporting Actor awards – I loooooove Dolphy, if you couldn’t tell! – and I have a feeling he’s up for National Artist in the near future. Recent films I’ve really enjoyed are some of the new wave of digital horrors, like Richard Somes’ Yanggaw and Rico Ilarde’s Altar. Lola by Brillante Mendoza was phenomenal, as was Khavn’s Son Of God. Having said that, I do prefer older films. I’ve spent this week watching Eighties Bold classics like Scorpio Nights, Boatman and the original Silip by Elwood Perez, and for me, Filipino films don’t come better.

3. The Search for Weng Weng began years ago. Could you regale us with your most interesting stories of adventures in the kickass Third World?

The adventure started in 2006 when Tikoy Aguiluz invited me to Cinemanila to do a cut-up of old Pinoy B films. I remembered a dream from ten years before – I was in a Manila hotel room with a phone in one hand, video camera in the other, and was saying, “I’m a filmmaker from Australia here to make a documentary about Weng Weng.” Weng Weng was my film obsession ever since I watched For Your Height Only in the early 90s. And there I was in Manila, looking for Weng Weng’s story! It wasn’t until my second visit that I tracked down Weng’s only surviving brother Celing de la Cruz. There in his Pasay City home he told me Weng Weng’s incredible, never-before-told life story, and then drove me to their family home, and then Weng’s grave. For me, Weng Weng’s both a personal avatar and metaphor for the Philippines film industry: someone who achieved greatness with very few resources, and then outlived their usefulness and was sent home to live out their days in poverty and obscurity. He started out as the bizarre image of a kung fu kicking midget and along the journey became heartbreakingly human.

I’ve been to the Philippines six times so far, and I’m still digging up incredible tales of B filmmaking and meeting my Pinoy movie heroes. Trading kung fu kicks with Mura, watching Apocalypse Now… with the extras from Apocalypse Now, refereeing a dwarf boxing match in Makati, singing karaoke with the One-Armed Executioner, sitting in a spa at Cleopatra Wong’s pool party – these weird happenings are just the tip of the iceberg. Oh, and I was mistaken for Jesus at Starbucks in Quezon City.

Then there was the time a friend of mine from Australia and I were trapped in a compound on EDSA with members of a religious cult who worshipped the Second Coming of Fernando Poe Jr. The CEO of an earth moving company had employed FPJ’s old stunt guys from the SOS Daredevils and Conrad Poe, FPJ’s half-brother, was even on the payroll. Dani and I ended up drinking a flagon of brandy with Conrad during the CEO’s sermon, then took over the karaoke machine. While mauling Scorpions’ “Wind Of Change”, the CEO decided the two of us were apostles sent from Australia to spread the Word of FPJ, and was seen surrounded by karaoke hostesses and slapping his knee, shouting, “Yes! There WILL be a Wind of Change!” He then autographed his book The Seven Trumpets and Conrad fed us more brandy. Hallelujah!

4. What was it like working with Mark "Not Quite Hollywood" Hartley on your solo project-turned-Pinoysploitation documentary?

To tell you the truth I didn’t have much input in Mark’s film other than handing over my research. When I sold the project to ABC TV here in Australia, I discovered afterwards they didn’t like my original pitch – a combination of first-person odyssey and detective story – and instead demanded a more essay-based film on Philippines B films like Not Quite Hollywood. Then they said, “Oh, and we’ll get that nice young chap who made Not Quite Hollywood to make it.” That’s how Search For Weng Weng mutated into Machete Maidens Unleashed. Mark wanted to mark his sole authorship of Machete Maidens and so I was kept out of the loop.

It’s certainly not the film I wanted to make and, from my viewpoint, has problems in both its content and structure, but is still entertaining and wittily edited. I guess that’s the industry for you. It’s certainly not the first time someone has been demoted on their dream project, and there’s still the book and doctorate thesis I’m piecing together from the five years of research, so only good things will come out of the experience. As for Search For Weng Weng, I’m hoping it will get finished one day.

5. Your investment in the Filipino film scene is intense, ultimately cultivating in Bamboo Gods and Bionic Boys. Could you talk a bit about the book? What are your favorite chapters? Favorite interviews?

The book’s still months away from finishing, but I can tell you now it’s BIG. There’s over a hundred interviews condensed into a history of genre filmmaking in the Philippines, starting from the early days of Fernando Poe Sr and covering Eddie Romero and Cirio Santiago’s export films with Roger Corman, the Pinoy James Bonds and Bruce Lees, the Bomba and Bold explosions, the parodies, the international co-productions, ‘Namsploitation, the Mad Max ripoffs… there’s a lot of territory to cover. My favourite parts would have to be interviews with my own personal Bamboo Gods who became close friends and have since passed on. Bobby A. Suarez, creator of the Cleopatra Wong series and, in my humble opinion, one of the greatest pioneers in Philippines cinema; Nick Nicholson, one of the last remaining American extras from Apocalypse Now and frequent White Goon in countless action films from the Eighties and Nineties; Palito, who also passed on last year and whose humility and humanity really touched me. I’m so privileged to have been given access to their lives and to record their stories for posterity.

6. What is it about Filipino (cult) cinema that attracts you? How would you convince the generally Westernized Filipino mass audience to partake in the glorious cinematic offerings of their motherland?

If your taste runs to third rate copies of second-rate Hollywood romantic comedies, I wouldn’t try. And if your attention is caught by trendy buzzwords like “indie”, again I can’t help you. But if you have the spirit of adventure and a taste for the absurd, and willing to look outside the frame of what constitutes “real” and “important” and “tasteful” culture, then there are a number of parallel film universes waiting, ones in which the rules of decency and propriety are turned on their heads, and films whose skewed logic and crackpot ideas are allowed to run rampant. That’s how I see the best of Philippines B movies.

7. One of the struggles of B-movie freaks involves the search for the movies themselves. Now, even with the internet, die-hards still have a tough time hunting for those absolutely elusive titles. What are some of your tips and tricks for easy, ehem, piracy? Also, what was it like collecting all those videos you collected back in the Middle East?

The Middle East was like the Wild West of the movie world! Betamax machines arrived in ’79 – I was nine – and within months, around fifty video stores had sprung up stocking the most eclectic range of stuff taped off TV, filmed on cinema screens, you name it, it was there somewhere. I was like the proverbial kid in the candy shop, consuming anything and everything until my stomach ached. I might have a Beta tape or two from those days, if you’re interested…

I ran a cult rental shop called Trash Video for fifteen years until September 2010, and witnessed the rapid changeover from videotape to DVD, and realized early on there are thousands upon thousands of films that will never make it to digital format. It’s really up to tape hoarders to digitize their collections and load them on file share sites just to keep those films in circulation. Otherwise a kind of cultural decimation happens, like what happened in the Philippines before the Eighties when film prints were junked by studios or left to rot in open air basketball courts (true story!) and thus are lost forever.

My advice – just between us, of course - is to find reliable download sites, or to make friends in trading circles. Also, don’t be afraid to walk down dark alleys in Quiapo. I found Pinoy movies which don’t exist anywhere else in the world. And please don’t call us pirates - hardcore collectors are film nerddom’s last hope! Sorry, did I say “us”? I meant THEM. Hehe.

8. Another significant characteristic of cult films is their fervent followers' obsession over details. What are some often overlooked scenes, shots, and sequences in some movies that have stuck with you?

There’s a school of thought that says there’s five minutes of gold in most movies, and I’d probably agree. These days however I don’t have the patience to pan endlessly for gold in a river of shit, and I’m watching mostly Pinoy films, so I can talk about those moments: a village’s children cutting off a naked Mark Joseph’s head with a hoe in Silip, the giant ice cream hallucinations in Temptation Island, Michael de Mesa using Maria Isabel Lopez as a samurai sword sheath in Hubo Sa Dilim. Last time I was in a hotel in QC, I turned on Cinema One and there was a three-minute shot of Rene Requestias shitting into a toilet. Amazing, startling images that have been hardly ever seen outside the Philippines, and that’s a criminal act. Except maybe the shitting.

9. Name the most hilarious/kitschy/splendid movie titles you've encountered, regardless of their content.

10. A third trait of the cult film fan is the usual loathing for Hollywood, but if you had to name your top 5 box office must-sees, what would they be, and why?

Noooooo, I LOVE Hollywood. Maybe not the last twenty or thirty years’ worth, but definitely mainstream Hollywood before 1980. Choose any five from these: The Godfather, The Shining, A Clockwork Orange, Bonnie And Clyde, The Exorcist, Rosemary’s Baby, The Wild Bunch, Midnight Cowboy, Straw Dogs, the original Planet Of The Apes. All popcorn films, all big budget studio films. I ask you, what happened in the last thirty-odd years to change Hollywood so dramatically?

11. Lastly, if you had the blockbuster budget to make a film (say, Inception's $150M) what would you do with it? How would you spend it? What would the movie be all about?

I’d make five films for 5 million each, then farm the rest out to my favourite Filipino filmmakers. Imagine what talented and resourceful local directors, who already turn out astounding films on meager resources, could make in the Philippines with a fifty million peso budget?

I’m sitting on a script right now I’m trying to funding for called The Taller They Come. It’s a spoof on both action movies and films on filmmaking, and is about a clueless Australian who cons his way onto a film set in the Philippines, tries to finish a midget kung fu remake of The Harder They Come in a week, and has an Apocalypse Now-style mental breakdown as the film-within-the-film becomes stranger by the day. I have the cast and crew and waiters from the Hobbit House on standby, if anyone has a spare few million pesos lying around…