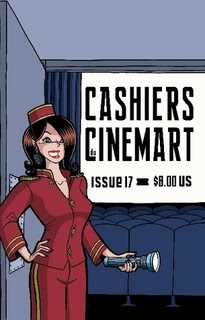 Ladies and gentlemen, I am proud to say I am a published author once again! My 15-page article on mad Filipino satires is in the latest bound issue of one of my favourite US magazines, Mike White's Cashiers Du Cinemart. To read the entire rant where I wax lyrical about Dolphy's James Batman, Chiquito, the Pinoy Bruce Lees and James Bonds, Tintoy, Niño Muhlach and (of course) Weng Weng, please click HERE:

"The Great Manila Cinema Heist!" A Brief History of Philippine Parody and Outright Thievery In The Country That Copyright Forgot, Part One by Andrew Leavold

INTRODUCTION: I still remember watching my first exploitation classic from the Philippines, the midget James Bond spoof For Y’ur Height Only (1981), almost twenty years ago. Over the astounding course of the ratty VHS tape’s running time our 2 foot 9 inch hero Agent 00 played by Weng Weng, a curious little brown creature with a receding Ramones bowl cut and an all-white suit and trick straw boater hat, cracks an international drug ring, gets the girl, loses the girl (“Irmaaaaa!”) and infiltrates the secret lair of evil criminal mastermind Mr Giant (played, appropriately enough, by a dwarf named Goliath!), all with an armful of miniature gadgets and his signature move of punching someone in the balls, then running between their legs.

It’s not just the novelty of seeing a Filipino midget pretending to be a gun expert and ladies’ man, or the inexplicable thrill of watching bad (and I mean BAD) kung fu movies. Maybe it’s the mad vision of a Manila caught in a perpetual Seventies twilight of bad disco, Marlborough Man mustaches, flared collars and equally-flared nostrils. Absurd, tangential logic abounds, as does the knee-jerk colonial impulse to subvert AND embrace their dominant Western culture simultaneously. For me, For Y’ur Height Only rammed a point home with a vengeance, that the Philippines' relationship with Hollywood is a strange mixture of awe and loathing; beneath the Hello Joe's you're not sure if they're trying to steal your jeans or stick you in the ribs with their balisong blade. An outsider will never know precisely where the awe ends and the loathing begins. On the surface at least there's a playfulness, an anarchic and gleefully deranged rearranging of pop motifs for amusing and delirious effect. It should add up, but doesn’t. And it doesn’t matter, for whatever the reasons, the Philippines B-film can be as addictive as their local crack known as “shiboo”, and the hit lasts a lifetime.

Once I started travelling to the Philippines and began to wade through the morass of unexplored Tagalog language B films, I soon discovered that Weng Weng was just the top balancer's toupee on the enormous human pyramid of parodists, and there existed an culture unfamiliar and fundamentally unfathomable to the rest of the world: one of wholesale, guilt-free and consequence-free commandeering of global and local pop iconography via clever counterfeiting, relentless lampooning or direct theft. Unlike their Turkish counterparts, Filipino filmmakers were never so brazen as to steal entire sections of footage and edit it without shame into their own knockoffs of Star Trek or The Empire Strikes Back. In the Philippines, musical cues, theme songs, story ideas, characters and titles were nevertheless all up for grabs, either stolen without a thought paid to the copyright holders, or fed through the Pinoy Pop Culture mincing machine (“Pinoy” being the colloquial term for “Filipino”), to emerge as a mutant-looking amalgam or queer multi-hatted hybrid. Despite being signatories to the Berne Convention since 1950, the tyranny of distance and cost of mounting court proceedings in a foreign country gave free rein to these scoundrels and opportunists, or Dadaists and post-modern revolutionaries, depending upon your political persuasion, taste for adventure, and personal limits of patience and perseverance.

Humour never travels well. Sady, much of the Philippines' cinema prior to the mid-80s is lost forever, and those few Filipino comedies that have made it beyond the Philippines' borders, dubbed poorly and thus losing much of their raison d’etre in the transition, have done so for the most bizarre reasons and under the most freakish of circumstances. That leaves the bulk of their comedies unreleased to the outside world and not subtitled, making their puns, wordplay, cultural references and mangled English (beyond the conventional mix of English and Tagalog known as "Taglish") completely incomprehensible.

Then there's the recognition factor that's lost on us foreigners, the delight in watching sometimes decades-old schtick, which often requires some comedians to be left on the shelf long past their use-by date. More so than parody, much of Philippine comedy is of the romantic or domestic variety, sticky and sickly sentimental, and centring on family misunderstandings, teen love affairs, hen-pecked husbands and screeching mothers-in-law, but countered by a streak of derision and decidedly un-PC cruelty, aimed at taking childish glee at the differences of the "other". This translates roughly to a carnival-like atmosphere, in which audiences gawp at the grotesquely fat, emaciated, freakishly tall, small, toothless, bald, screamingly effeminate, stooped, stuttering, cross-eyed, brown- or black-skinned and, by Filipino standards, plain ugly...

TO ORDER A HARD COPY OF THE ISSUE, PLEASE CLICK HERE