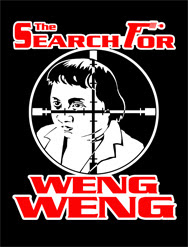 
As you may have heard, I'm currently running a crowdfunding campaign to finish my THE SEARCH FOR WENG WENG documentary - http://www.kickstarter.com/projects/210613803/the-search-for-weng-weng-1


The film has been a labour of love since I started filming in 2006. In short (no pun intended, I swear), it's a guerrilla-shot chronicle of my obsessive quest to find the two-foot-nine James Bond of the Philippines. Funnily enough, THE SEARCH FOR WENG WENG is shaping into a film as much about obsession and following one's passions to extremes as it is about its two-foot-nine subject.


With over 100 hours in the can, it's finally time to deliver a 90 minute documentary feature. The $30,000 we're asking for from Kickstarter pledges is to pay for its post-production and, down the track, touring the film internationally. The idea is to fund its completion in the same way it was filmed - guerrilla style - to retain as much control as possible over the project. The finished film will subsequently be released in this country theatrically and on DVD by Monster Pictures in Melbourne (http://monsterpictures.com.au/features/the-wild-wild-weng-weng/).


At two weeks into the eight-week campaign, we are currently more than a third of the way towards our goal, and that's a very encouraging beginning.


However, there's a long way to go, and for that reason I'm asking for a personal favour from each of you.


Could you please visit the link, watch the video, and then forward the link and this blurb to anyone who might be interested. This would include:


- would-be investors, both small and large (and with a huge list of incentives on offer, even a $10 pledge to Kickstarter receives a VIP ticket to its Australian premiere);


I apologize for imposing on your valuable time, but I really believe you will recognize in this venture the tenacious spirit of independent filmmaking alive and kicking. Needless to say there is a lot riding on this for me, both professionally and personally, and I hope I can inspire you into coming along with me on my adventure of a lifetime.


Thank you for your time and attention. I look forward to continuing this conversation here, by private message, or via email at andrewleavold@gmail.com.


Andrew Leavold (Writer/Director, THE SEARCH FOR WENG WENG)
Posted by Unknown at 10:41 AM