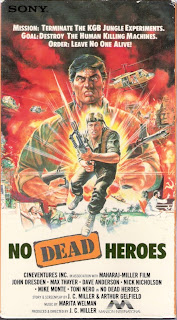 [Filmed in 1985 as "Blood Machines", distributed with the assistance of West Indies producer Anthony Mahiraj. Released on French VHS as "Commando Massacre", on Danish VHS as "War Machine", and on German VHS as "Geheimcode Leopard"] 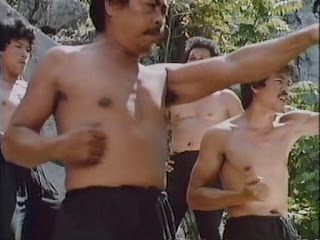 Matt Cale is our hero...

Order: Leave No One Alive!

Entire Story in Fewer Words than are in this Sentence: 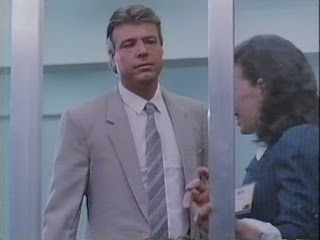 Disappointingly, none to be found. The only thing that came close was a camera shot through a beefy man's legs. Still, in a Death Wish sort of way, the message is sent that if you love a woman, she will eventually get shot. 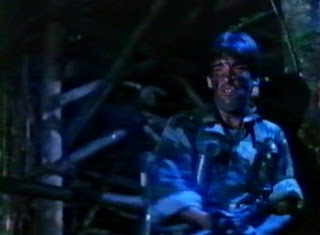 This film was a fucking bloodbath! A whopping 237 people were killed for my entertainment. Here's the breakdown: 101 Yellow Bastards, 93 Latin Devils, 25 Atheistic Russkies, and 18 Innocent, Noble Americans.

How Bad Was it Really?

If budget, effects, acting, script, and story aren't a concern, it's not half bad. Among the more insipid elements:

The KGB agent (Ivan Mitovich) has the sort of accent you'd find in Montgomery, Alabama.

The exteriors were clearly shot in the director's backyard.

The soundtrack is so inappropriate that during scenes of extreme violence, the film could have been mistaken for a wacky comedy.

A sign posted in the Soviet Union says "USSR," despite the fact that "CCCP" would have been the more accurate designation.

After Vietnam vet Richard Sanders says to the head of the CIA, "Fuck you, Baylor, I'm not one of your pawns anymore," he actually picks up a pawn from a nearby chess board and throws it at the director's chest.

The editing is so poor that characters are often cut off in mid-sentence.

Sanders is fucking a double agent from El Salvador less than 24 hours after watching his entire family murdered before his eyes. The next day, he says that he loves her.

In all, I've rarely been exposed to a film of this supreme incompetence. It's so cheap and so badly dubbed in parts that it took all of my power to stay away from the stop button. Thankfully, I just might be the only person alive to have seen this piece of shit.

The cigar-chomping KGB cracker fires off, "Nobody spits in my face goddammit! Nobody!" after putting a bullet in an American POW's heart.

Despite the ultra-cheap surroundings, the typical Cold War rhetoric spilled out. Russians are uniformly portrayed as sadistic tyrants who hate God and love to watch free people suffer and die. And of course, all Latin American activities are being directed from Moscow. Communists also enjoy raping old women, butchering young children, and burning the houses of the non-compliant. The fierce American hero of the film even states at one point, "We go to sleep, Communists will steal this world as sure as thieves in the night." But what's with the CIA director who looks like Hugh Hefner?

A POW is burned with cigars and has his fingernails pulled out until he dies of shock; a Vietcong soldier is shot in the crotch with an arrow before falling to his death; and a man is shot in the chest while walking across a bridge, pausing only to stabilize himself on the railing with his left hand, before jumping over the side. 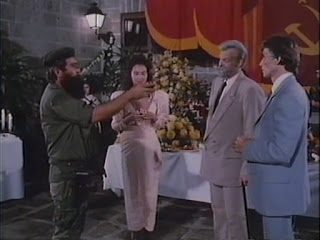 Greasy, pot-bellied Latin American thugs ejaculate after only 30 seconds of fucking, while virile American studs are able to last for hours. And to think that I had always dismissed the rumors of a Guatemalan grandfather... 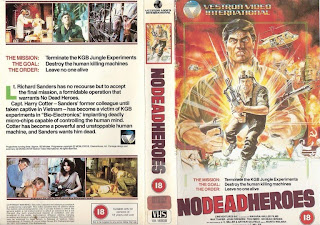 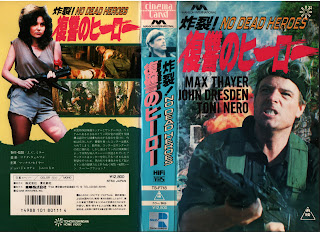 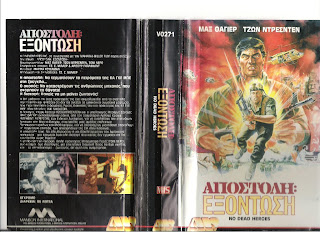 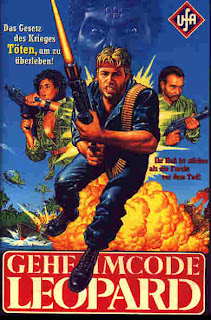 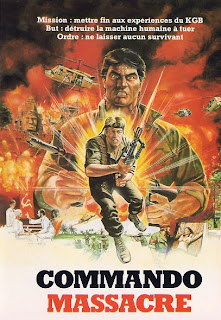 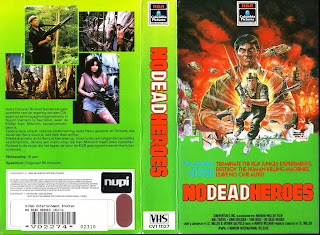 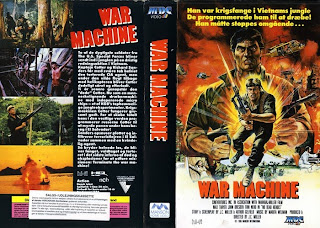