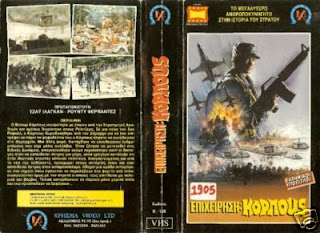 I dealt only with Vanguard Films, a now-defunct company, then headed by Simon Ongpin, with whom I have lost touch. The two other companies you mentioned may have been distribution companies.

The film OPERATION: GET VICTOR CORPUS, THE REBEL SOLDIER is based on the real-life story of Lt. Victor N. Corpus, a graduate of, and subsequently instructor at, the Philippine Military Academy (PMA, the Philippine equivalent of West Point) who in 1970 defected to the New People's Army (NPA), the armed wing of the Communist Party of the . When he defected, he led a group of NPA guerrillas in raiding the PMA armory and bringing out high-powered firearms that considerably boosted the guerrilla group's armed strength.

Six years later, he was reported to have been captured by government troops, and he was believed to have spent the next 10 years as a prisoner in a military camp. It was only after I had completed the second draft of my script, and after he read it, that he publicly admitted he had surrendered to the Marcos martial-law regime. In fact, it was in a letter to me that he made this public admission, and I had my five minutes of front-page fame when his "Dear Pete" letter came out in the media, leaked out, I suspect, by Vic Corpus himself. The letter is reprinted in the prologue of Vic's self-published book SILENT WAR (1989).

After that "Dear Pete" letter, in which he explained the reasons for his surrender, Vic was reinstated in the armed forces. He was a brigadier general when he retired.

Rudy Fernandez won a FAMAS (Filipino and Sciences, the Philippine Oscars) award as best actor for playing Victor Corpus. I don't recall if a video of the film was ever commercially released, but I have a bootleg VHS copy that Rudy Fernandez himself gave me years ago, made (if I remember correctly) from a U-matic copy that Rudy had. I meant to ask Rudy if he could have a DVD copy burned for me, but he died last year before I could mention it to him.