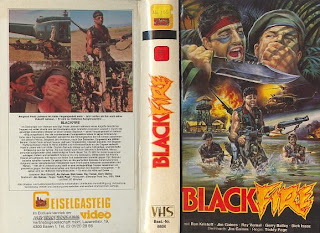 I was in the mood for an old-fashioned, cheap, Vietnam-set actionfest, so I decided to put Teddy Page’s (aka Teddy Chiu’s) BLACK FIRE into my VCR, as the German tape release on the Geiselgasteig video label (which seems to be slightly cut by the way) impresses with a truly cool cover artwork. Never rate a movie by its cover, though, as we all know, as it could be very misleading. In the case of BLACK FIRE, it sure is a bit misleading. BLACK FIRE (produced by K. Y. Lim’s Silver Star Film Company by the way) opens, promisingly enough, in the Philippines jungles that stand in for Vietnam where the prologue takes place. A handful of soldiers kill off a bunch of Vietcongs in various gruesome ways. Necks are broken, bodies are riddled with bullets, knives enter chests, and people are blown to smithereens thanks to Romano Kristoff’s handy arrows with explosive heads.

Romano Kristoff (who also stars in the superior NINJA’S FORCE (1985), NINJA WARRIORS (1985) and DOUBLE EDGE (1986)) is of course Sergeant Frank Johnson and his acting abilities leave a lot to be desired. Jim Gaines as his friend Jim Anderson is not really better, but hey… who am I to complain. Mr. Gaines was a prolific actor in the 1980s, appearing in approximately thirty movies shot in the Philippines. He can be seen in FIREBACK (1978), ENTER THE NINJA (1981), ONE-ARMED EXECUTIONER (1983), BRUCE’S FISTS OF VENGEANCE (1984), AMERICAN NINJA (1985), WAR WITHOUT END (1986), PHANTOM SOLDIERS (1987), MANNIGAN’S FORCE (1988), and DOG TAGS (1988). Besides, he was an extra in Francis Ford Coppola’s seminal APOCALYPSE NOW (1979) and apparently he provided the voice for a character in the English version of the unforgettable Weng Weng masterpiece FOR YOUR HEIGHT ONLY (1981). Apart from that he often worked for Italian cult director Bruno Mattei (who died on May 21, 2007 --- R.I.P. Bruno, and thank you for the wonderful hours I had when watching your movies!), appearing in ROBOWAR - ROBOT DA GUERRA (1988), ANIME PERSE (THE JAIL: A WOMEN’S HELL, 2006) and L’ISOLA DEI MORTI VIVENTI (ISLAND OF THE LIVING DEAD, 2006). Anyway, back to the plot (screenplay by Jim Gaines and Teddy Page, based on a story by Jim Gaines). Before you can say “what would John Rambo do?” Sergeant Johnson’s unit is reduced in numbers until only Frank and Jim are left. When a grenade explodes near him, Frank looses consciousness and has strange flashbacks of his childhood, when he was trained to be a Ninja. In those flashbacks his master feeds him with vital information, like: “You have to be like an arrow that desires to bounce from the string.” Or: “Be like a bamboo cane. Flexible but unbreakable.” I like this one too: “Grasp the situation with your soul, because it sees more than a hundred thousand eyes.” How very true. Then Frank Johnson and Jim Anderson are transferred to San Sebastian and the flick becomes unexciting, rather dire and dull. There is not much happening, and what little does happen is quite uninteresting and unspectacular. At least there’s a show-stopping training sequence that has got to be one of the most hilarious training sequences ever put to celluloid.

So BLACK FIRE drags along more or less until… yes, until all kind of shit happens to Frank Johnson. First Nancy, who promised to get him some information, is brutally killed. Then everybody believes he murdered her (he acts very suspicious, I have to say). Then he is beaten up, hosed down, nearly drowned and put into prison. In other words: Frank Johnson is pushed too far. And you do know what happens if a Vietnam veteran is pushed too far, don’t you? Don’t you??? Captain Salcedo does know it. “Johnson is a maniac! He kills you, me, everyone of us!” The gangster boss is not that impressed. “Who do you think this Johnson is? Rambo?” Frankly speaking, Romano Kristoff is no Sylvester Stallone and Frank Johnson is no John Rambo, but at least he gives it his best shot. The body-count rises dramatically in the last fifteen minutes, thanks to Frank Johnson’s rather big arsenal of weapons. Sadly it’s a long way to the explosive showdown, but it certainly is worth the wait. So even if BLACK FIRE is far from being the Philippines’ best action flick I enjoyed it, particularly the first and the last fifteen minutes. The Ninja (flashback) scenes are hardly worth mentioning though, but it’s always fun to see those Japanese superkillers in a movie. BLACK FIRE takes itself a bit too seriously for my tastes, and so some parts of the action appear to be unintentionally funny, despite the violence on display. There are a few very nice and very dangerous looking stunts, like a guy jumping from a watchtower moments (and I mean moments!) before it explodes. For about half an hour BLACK FIRE is Filipino low-budget action schlock the way I like it… the rest is rather dire stuff, sadly. Still it’s well worth checking out for the cool finale alone, if you ask me. According to some sources on the net, Romano Kristoff holds the black belt in karate and he is currently managing a restaurant in the Philippines. In the early 1980s he appeared in a few Italian productions shot in the Philippines, like Antonio Margheriti’s two cult-favourites L’ULTIMO CACCIATORE (THE LAST HUNTER, 1980) and TORNADO (THE LAST BLOOD, 1983). Other action flicks starring the Spanish-born actor are INTRUSION CAMBODIA (1981), the cheeky Rambo-rip-off SLASH (1984), BRUCE’S FISTS OF VENGEANCE (1984), WARBUS (1985), TRE UOMINI DI FUOCO (THREE MEN ON FIRE, 1986) and JUNGLE RATS (1987). So there’s definitely more Filipino action fodder to look out for…
Posted by Unknown at 4:10 PM