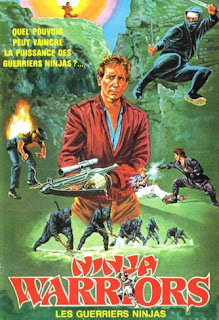 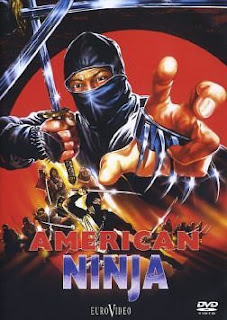 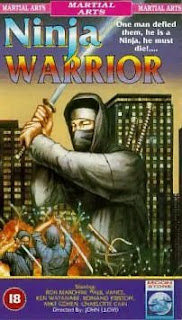 Here we have another insane but enjoyable entry into the Ninja film genre from the Philippines. Right from the start it’s quite obvious that NINJA WARRIORS is a special experience of the hilarious kind, kicking off with a bunch of Ninjas who dig themselves through the ground like moles on LSD. Before you can say ‘now that’s some funny shit’ they pop out of the earth and they all have gas masks on their faces. Strange thing is, they don’t plan a gas attack. But perhaps that’s a protection against the earth and stones on their subterranean adventure!? Don’t you hate it when your mouth is full of clods and your eyes become acquainted with grains of sand? Anyway, they loose no time and rush to a huge building, entering it through the windows after climbing up some columns. The building is heavily guarded but the Ninjas are smart and skillful and they begin manipulating the cameras, accompanied by a wonderfully wicked music score. Then they run through the corridors (of course in the special way only Ninjas run), search some offices until they find a top secret document which they proudly hold in front of the camera! When they are leaving the building they kill a few guards (one slips on a few marbles and has his face bristled with shurikens, another is set on fire for no apparent reason) and escape without difficulties. Next we are treated to a very special delight: the opening credits. And of course we see a few black Ninjas running around like crazy and do strange gymnastics with their gas masks still on, until they start burying themselves in the desert sand. All this while a pounding rock score can be heard on the soundtrack (music by Pat Wales). This has almost a surreal quality to it, but otherwise it’s a damn great opening. Thankfully it keeps going on like this, with one weird and insane situation hunting the other. 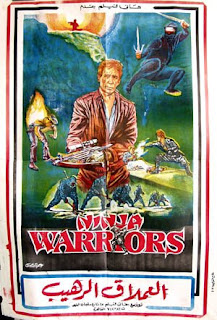 Based on a story by Ken Watanabe, John Lloyd’s NINJA WARRIORS is as far away from being good as Jean Claude van Damme is from winning an Oscar. Nevertheless it’s great fun to watch and it fully delivers relating to the entertainment value, even if there are some boring bits and pieces here and there. Take, for example, the dialogue. At one point Ken Watanabe says, after things quite don’t go as planned: “For every defeat there will be victory. For every failure there will be success. We have taken one step backward, but I can assure you, the next move will be two steps forward. This is the way of the Ninja!” This has got to be one of the all-time great monologues in the history of Ninja cinema. One gangster remarks while torturing a girl: “If she dies she won’t talk!” A fat, insane scientist screams “I’m gonna rule the world!”, while the police inspector asks, after being confronted with the word ‘Ninja’: “Nin-who?” “NinJA. NinJA”, his subordinate explains enthusiastically. I love it. 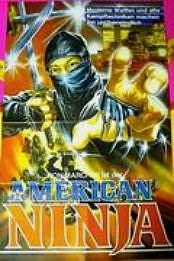 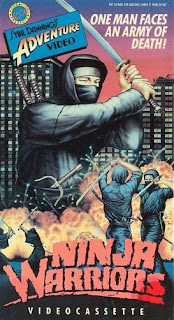 NINJA WARRIORS is a cool trashfest featuring deadly boobytraps, bad actors, stupid dialogues, a brisk tempo, hot music, a silly storyline (evil scientists want to create zombie fighters who should help to take over the world), cruel torture, lethal shurikens, idiot policemen, plus a few cool and gory death scenes. Indeed, there’s a wee bit more blood on display than in comparable flicks. The goriest bit is the sequence where Romano Kristoff (this time he’s on the evil side) goes the ‘way of the Ninja’ after making one mistake too many. Which means he commits hara-kiri and slashes open his belly. Another highlight is the end of the police inspector who don’t believe that Ninjas do exist. Until he faces none other than the Ninja master who rams the sword through his head (from behind) and the point comes out of his mouth. Plus, of course, there’s the usual shuriken fun, sword action, and nail spitting. NINJA WARRIORS was obviously made on such a shoestring budget that John Lloyd couldn’t even afford some decent explosions. You just see something small exploding rather unspectacularly behind a hill, although they want you to believe that it was a big house that was blown to pieces. And the nice showdown takes place in a quarry.

Of the four Filipino Ninja flicks I have seen at the time of writing (the other three are NINJA’S FORCE (1985), BURNING POWER (1985), and DOUBLE EDGE (1986; also directed by John Lloyd)) NINJA WARRIORS is the most entertaining and therefore my favorite. Fans of Ninjas certainly get their money’s worth as there are countless members of the secret Japanese killer society appearing in the eighty-odd minutes running time. Fortunately (for the whole wide world) there also is Steve, a white Ninja and friend of a policeman, who decides to put an end to their grotesque experiments and gruesome killings. If you like action-packed, low budget Ninja trash than I urge you to give NINJA WARRIORS a chance. I bet you won’t regret it. The American video release on the Home Video USA label is presented by blonde, Austrian-born bombshell Sybil Danning (the cover-art proudly announces ‘Sybil Danning’s Adventure Video’) who not only introduces the movie but also waves around with a sword and announces an action flick called FIREBACK (starring Richard Harrison) after the film’s conclusion. Oh, and before I forget, the English dubbing is tremendously bad. But it somehow adds to the fun factor.