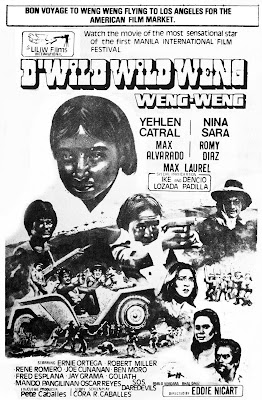 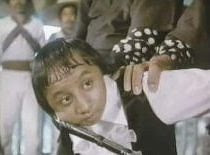 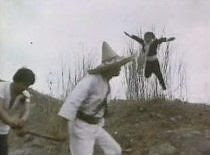 One of Weng Weng’s first cameos saw him playing deputy to Dolphy, the king of Filipino comedy himself, in Da Best In Da West (1981), a film which employs the outrageous conceit of having its cast, itself a throwback to the glory days of the Pinoy western, run around in cowboy hats and ponchos, whilst clearly remaining rooted in the modern-day Filipino countryside. D’Wild Wild Weng (1982), made barely 12 months later between the Agent 00 films, is a shameless plundering of d’King’s RVQ production courtesy of Peter and Cora Caballes’ rival Liliw Films International, and shares (exploits?) much of the cast from Weng Weng’s other movies. 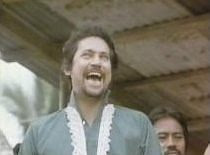 Yehlen Catral (Lola in For Y’ur Height Only) plays Elsa the barmaid, classic bad guy Romy Diaz (The Impossible Kid’s main villain Senor Manolo) is note-perfect with Mestizo superiority as the corrupt governor Sebastian, Max (FYHO’s tartan-clad villain in shades and cloth cap) Alvarado takes a turn at playing a sympathetic non-Goon character as the mute Lupo, and Nina Sara (later in The Impossible Kid) is Weng’s love interest Clara. It’s no coincidence that all four actors ALSO worked on Da Best In Da West, considering producer Pete Caballes scored one of the many gratuitous cameos, was good friends with Dolphy, and secured Weng Weng roles in two of Dolphy’s films (see also 1980’s The Quick Brown Fox). You can almost picture Caballes on the set of Da Best... with a huge butterfly net and box of pins. 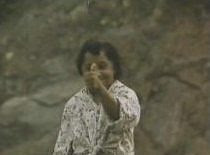 D’Wild Wild Weng is not strictly speaking an Agent 00 film, as Weng Weng trades in his characteristic white suit for a tiny waist coat and ruffled shirt (incognito, you understand). He is only ever referred to as “Mister Weng” or “Mr Wang”, depending on how hungover the guy in the dubbing booth was. He does, however, strip down to karate pants to do some suave martial art moves and, once the sight of Weng without a shirt becomes too much, dons the familiar white attire AND blue paratrooper duds for target practice, just in case you’ve forgotten what he’s capable of.

Silhouetted against the opening Spaghetti Western credits and Pablo Vergara’s jaunty mariachi score, government agents “Mr Weng” and his mountainous sidekick Gordon - who, played by future Zuma star Max Laurel, is more than twice the size of Weng - head to to investigate the slaying of the Mayor and his family. They find the Mayor’s caretaker Lupo has had his tongue cut out (Max Alvarado grunts and squeals and pulls faces, but under his Chinese villain mustache we can still see his tongue!) and the evil governor Senor Sebastian in control, along with the familiar faces of Eddie Nicart’s stunt team SOS Daredevils as Sebastian’s army of Goons, decked out in uniform sombreros and gunbelts. Villages are burnt, townsfolk are lynched, goats and chickens are confused. These are desperate times indeed. 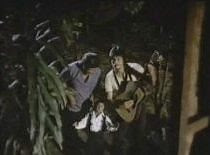 Weng and Gordon rescue kindly villagers Mr Dencio and his daughter Clara, who warn them of Sebastian’s terrible ways. Later, sensing an opening, Weng tunelessly serenades Clara outside her window with Gordon on guitar and Lupo squealing harmonies; it’s a direct steal from Dolphy’s hopeless attempt at seduction in Da Best In Da West, in which Weng strums a guitar as big as he is. Less than a minute later they discover the family has been kidnapped - by ninjas, no less! - and are tied to X-shaped crosses by Sebastian’s sidekick Ku Manchu (Ernie Ortega). Weng helps them escape, but is later captured himself, spread-eagled between four posts with his shirt more than a little ruffled. 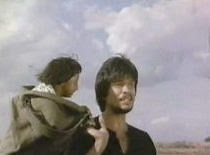 As always, Weng’s stature is the main source of amusement - from being carried around in a sack on Gordon’s back, to stealing bananas from under a table, to Gordon launching him like a coconut at Sebastian’s balcony. It’s as if a performing monkey had its cigar taken away and was cross-bred with from Diff’rent Strokes, then dressed in a set of pajamas. At one point Gordon rescues Weng from his cell by dressing as a monk, while Weng crawls under his cowl and clings - fetal style - to his belly, before hanging down like Max Laurel’s third leg. Shudder. He then slides across the floor, in vintage 00 mode, through a goon’s legs and karate chops their hamstrings, and does a bionic leap from a sixth-story church tower into Gordon’s waiting jeep. In a word: Weng Gold. 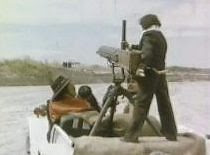 Of course, there are very few gadgets in the Wild West other than a Gatling Gun, even bigger than Weng Weng, mounted on the back of a jeep for the big finale. And what an ending: Weng, Gordon and Lupo face-off against a veritable army of Goons. 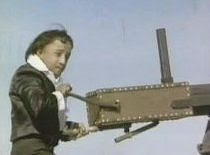 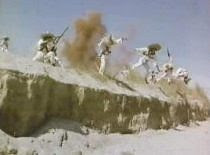 On the signal, Weng cranks the rattling Gatling’s handle as fast as his little arm can, mowing down wave after wave of “Mexicans” in slow motion (recalling the best moments of D’Wild Bunch). 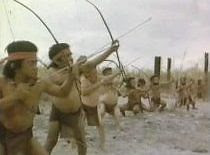 Stage left, a tribe of pygmy Indians - you ready correctly, DWARVES in redface and warpaint - launch a counter-attack with bows and arrows amidst a sea of explosions. Oh, and let’s not forget the ninjas. It’s one of the most insane Filipino B-endings, a micro-Apocalypse Now and a dadaist triumph for Nicart’s merry band of pranksters. 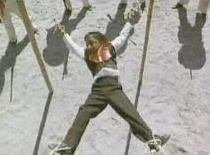 The Agent 00 films were sold all over the world, but I don’t recall an English-dubbed midget western ever making it past Manila Customs. As with its follow-up The Impossible Kid, Weng Weng has the same literal, uninspired and relatively humourless dialogue delivered in a breathy baritone at complete odds with his real helium-huffing voice, which makes you yearn for the For Y’ur Height Only crew to hijack the dubbing studio. And, like The Impossible Kid, it’s technically rough in places, and ultimately isn’t a patch on the original Agent 00 adventure. Nevertheless, D’Wild Wild Weng does have its share of glorious Weng Weng moments, and the fiesta music (with just a hint of the theme from The Good The Bad And The Ugly) keeps things, like Max Laurel’s third leg, swinging away nicely. 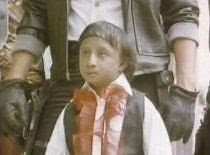